A teashop conversation that changed the life of an entrepreneur, when he almost quit after 2 business failures - Suresh Rajagopal

"I realized that I failed in my businesses, not because I had no money, but because of no clarity and no vision. It was time to bounce back; even then, I had no money, but I was clear and was sure that I would not quit anymore" are his experienced words. Read on, to learn the key secrets to start a succeeding start-up.
This Page Has Inspired
1680
People So Far..
Introducing Suresh Rajagopal from Chennai, India, founder of Kodebees, which helps nourish other start-ups through its tech-solutions. Suresh’s life as an entrepreneur, like many others, was a roller-coaster ride that took unexpected turns. The time when he was about to jump out of the ride, a force pulled him back for a safe landing.

After a huge experience of working in the industry for more than 12 years, he realized that he could achieve much more without the limitations at his work place. He recalls the moment of his independence, “I was working with ICICI bank as the product head and I was a part of the team where our team had been the reason for innovations, which created about 1.2 billion profit for the bank, after which the product was taken over and handed to the sales team. This might have been a great move for the bank to make increased profit, but it limited us from doing what we wanted to do, for the betterment of the product. This was the moment when I felt that I had to be my own boss, and that I should have the rights to take decisions.” With that, he decided to quit his job. The comfort life tried to attract him to not become an entrepreneur. This was the first challenge he says, “I was not from a very rich family. I had by then, begun to start earning well, living a better life. The first time I submitted my resignation letter, I got convinced by my boss to stay back at work. The second time I submitted, an entire panel convinced me to continue at work. I had by then reached a stage when I decided I would no more get convinced. So, I had to try and push myself thrice, even to leave my job and start a business on my own.”

He resigned in august 2012 and immediately started with a business - Open Minds, which focused on social media. Eventually, the ship sunk.  A lot of earnings were by then invested on it. The failure did not stop him from starting again, when he started Seyasoft Technologies with another friend. He received some financial aid from his wife, who was supportive in helping him achieve his dreams. Once again he failed to continue when he realized that the execution was not the same as planned. He had a team, but there was not enough money to pay them. This was the time he realized that investment was not the only important aspect of a business he says, “In the first two businesses that I tried to build, there was more focus on having investors, venture capitalists to help us grow. By the time I failed the second time, I realized that it does not work that way. There was also pressure from family and so, I decided that I would go back to work with some company again. I also went for an interview, but the questions that they asked during the interview made me realize that I had moved way beyond the knowledge of what they thought I had. Once again, I decided I should start new. This time, I was more clear; I knew I had to invest for my own business, atleast for the first few years until I get positive results and only then, raise funds. A lot of today’s start-up do this mistake of waiting for seed funds, or angel investors to even start off. The right way is to first setup the business, show results and then ask for funds for increasing the profit. That gives the belief even for investors that the business will grow. Coming back to my journey, I was still not sure of what to do. I happened to meet an old friend of mine in a tea shop. I marked this day to be the day of my new birth. My friend said he had an idea, but he did not have someone who could help him implement it. 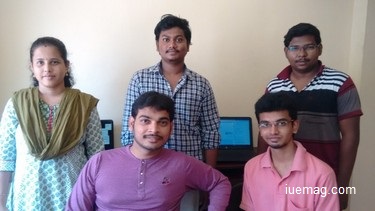 I took this as an opportunity and told my friend that I can do it. Seeing the belief I had, my friend transferred Rs. 100,000 that night itself to get the project going. This became a breakthrough in my journey of entrepreneurship. I realized there are many such start-ups which needed solutions. Since I had enough experiences in setting up businesses that failed, I knew what does not work . So, I started helping the start-ups to make their businesses better. I began to consult them, helping them with technology solutions, providing marketing suggestions; we almost became a product managers for our clients. We named this business of helping other start-ups, as Kodebees. All of us know that the bees continue to build their hives even after humans continue to destroy their hives. Same way, I continued to build better businesses and help others build one as well. Since, our major focus was on technology(Codes), we named it Kodebees. Slowly, we began to earn through the business. I still had investors for Kodebees. My wife, Dhamayanthi, was always there to support, although not always financially, but she invested her time and energy to motivate me. The entire team – S Kathiresan - Tech Head, Venkateswaran - Android & Mobile Head , Balaji - IOS Lead, Ashwin - IOS Developer, Sundaravarathan - Android Developer, Vignesh - Back End Developer, Rajasekar - UX Designer were all there to grow Kodebees; they are one of the major reasons for the company’s growth. It was in January 2015, when we had our first inflow of money (I had quit my job in august 2012). Till then, there were only expenditures. From then, there has been more support. Initially, our friends and relatives were our clients. Slowly, when my in-laws at the U.S found me working harder and with so much passion, they began to help with more clients. I had not forgotten that Kodebees was started to help stabilize my finances and to actually start a business.” Suresh also found a couple of mentors during his journey as the founder of Kodebees. He credits a part of his success to Mr Amarlal Nichani, CEO of Veuon Technologies - Chennai, who mentors him on the tech related innovation, brotherhood inside and outside business and sustainability. He also acknowledges his mentor who is an entrepreneur based from Bangalore who inspires & guides him in the field of client interaction & marketing.

As the inflow of cash has continued to increase, Suresh has now come up with his business model, known as ‘Tweak it’, to provide software services to start-ups at low cost. He speaks about the hurdles in the journey, “The journey to be here was not easy. I had a job where I had good earnings, as a product head for 3 states of the country - Tamilnadu, Karnataka and Andhra Pradesh. It was not easy to quit and start my own venture, when I knew I would not earn profit at least in the beginning. There was pressure from friends, family and relatives. Earning no profit for two and a half years was not easy as well. My wife played a huge role in helping me manage. What pushed me and still pushes me is the result. It is like the story of the lion and the deer. The lion chases the deer, since it needs to bring dinner for the family. Every morning, the lion wakes up and tells itself that if it does not run faster than the deer, there is no dinner for the night. Same way, if I don’t work harder, I cannot feed my team. I cannot keep my family happy. The end result that I need to achieve can happen only if I run every day.”
Get the Latest & Recommended articles in your Inbox

Subscribe!
Suresh has slowly began to place his foot in other countries as well. For a few more years, his businesses shall grow with no external investors. He also advices the aspiring entrepreneurs to start businesses immediately after education and not wait to gain experiences at different workplaces, “When you know a lot about the industry, you will have prejudice; you start drawing a limit to yourself and feel that you cannot do anything more. When you do not know too much, but are just aware of what happens, you are more daring to do all that it takes. Ensuring you have mentors throughout the journey can help grow faster. Finding mentors who have been through the same journey you wish to take, is important. There are few most important keys to succeed as an entrepreneur - firstly, never have a backup plan that says you can use your education to get a job if you fail as an entrepreneur. Feel that you have no life savers while you sail on a boat. You just need to somehow reach your destination on the same boat. If you think of the other options, then, subconsciously you are preparing to actually fail. Secondly, stay disciplined and the third, don’t create products just because the idea is good; understand your target audience, and then create it accordingly. Have a control over expenses; bargaining at every step is important. Most important lesson is to create a business, get results and only then, raise funds.”
Copyrights © 2023 Inspiration Unlimited eMagazine

This Page Has Inspired
1680
People So Far..
Any facts, figures or references stated here are made by the author & don't reflect the endorsement of iU at all times unless otherwise drafted by official staff at iU. This article was first published here on 8th April 2016.
IJ Kavyashree
IJ Kavyashree is a contributing writer at Inspiration Unlimited eMagazine.