Meet this dedicated lady, who, as a student, took up responsibility of her society and has changed the mindset of youngsters to believe in themselves! Read on
This Page Has Inspired
1147
People So Far..
“Dreaming is the first step towards achieving your goal. Once we start doing it each day, our mind automatically starts thinking of ways in which we can accomplish it. In a way, this process will continue to make you work hard towards your dream, which at times doesn’t allow you to sleep. It’s important to understand this which most of us fail to do because of fear or any other reason”, says Aashitha R Pade, who recently graduated from her engineering and is currently working at the corporate. Even before she started working, as a student itself, Aashitha had higher perspectives about life, than a normal student actually did. 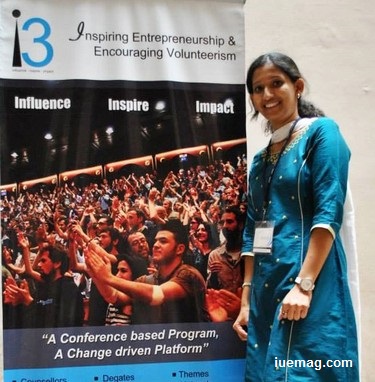 As a kid, she grew up with the dream of serving people as a doctor, but, eventually, after her 12th grade , she could not get a medical seat, missing a few ranks. Her dream to serve people almost stopped until she found a platform where she could explore herself, during her engineering course at Dr. Ambedkar Institute of Technology. A conference where she heard from the international speaker, Mr Sujit Lalwani, made her believe that her dreams could be turned into reality when there is faith and belief to do it. That was when, she got connected to more people who could mentor her in the platform iU1010,which she says, has given her “experiences and lessons for lifetime”, and she has been the reason to impact not less than 10,000 children in a matter of five weeks. She also innovated her own project in this course of five weeks, called ‘Bean2Green’, which aims to increase the green cover in the world. Through the project, she encouraged people to plant saplings because of which, she has been responsible for planting more than 6000 saplings in and around Bangalore, in the last 3 years.

Inspired by her experiences at iU1010, she wanted to continue to learn more and stay connected to her mentors, while she wanted to continue impacting the society. That was when she was a part of a conference-based platform, i3 - influence inspire impact, which helps connect youngsters, to achievers from various fields, and also work on projects that shall influence, inspire, impact the society and also, build confidence, gives exposure to these young minds. She cherishes the moment of her decision to be a part of such a platform, “As they say, ‘there will be a reason behind each happening in life’, there was a mode of ‘Turning Point’ in mine too, which has given my life a whole new different shape in terms of my attitude, my actions, my perception and way of thinking which happened gradually over time. I discovered a new “ME” in the course of the journey of i3, made my parents proud!”.

Aashitha, who believed that helping the society can in turn change the mindset of more youngsters, executed numerous of projects during her course at i3, like meal donation campaigns where she has been the reason to feed the hunger, iU NewsPaperBag campaign where she was the reason to make 1100 Newspaper Bags in a  single day. While she learned the importance in engaging herself in the society, Aashitha got connected to achievers like Mr. Chetan Yellapurkar, founder of Mark Your Trails and adventor, who is one of her source of inspiration. “His crazy dreams, madness about travel and exploring, cheerful attitude inspires me and makes me realize the worth of enjoying life!” she says.

Bigger opportunities continued to reach her as she continued to be socially responsible. She has been invited to numerous of schools and colleges like MLACW, PES College, Malnad College of Engineering as a Judge, Chief Guest and as a Guest Speaker. She was also chosen to be one amongst the six people from across the country to be a part of the World Merit India Council, where she represented the youth of the whole of the nation in the global platform of World Merit - a platform that connects talented youth with opportunities and focused on creating change.
Get the Latest & Recommended articles in your Inbox

Subscribe!
Aashitha believes that she could reach such heights because of her mentors from iU1010 and i3, who taught her the way of life. She shares about her mentors, “I’ve always got inspired hearing to how they’ve beaten their challenges and not just they, becoming successful themselves, but, showing so many youth across the world, the power of dream and leading them towards a better life. This is a strong reason why I would recommend the youth to be a part of i3!”

Equal support from her parents has been the reason for her to achieve what she has, even as a student. Aashitha’s story just proves that age or work does not matter to do what one wishes to. A thought, dream, platform and right mentors can make the real YOU and bring out your inner potentials. She envisions to “see the youth of the nation empowered, who themselves, must be the driving force and be capable of leading other less empowered peers”.
Copyrights © 2022 Inspiration Unlimited eMagazine

This Page Has Inspired
1147
People So Far..
Any facts, figures or references stated here are made by the author & don't reflect the endorsement of iU at all times unless otherwise drafted by official staff at iU. This article was first published here on 5th December 2015.
IJ Kavyashree
IJ Kavyashree is a contributing writer at Inspiration Unlimited eMagazine.