"You must be the change you wish to see in the world", said Mahatma Gandhiji. Here is a write-up which throws light on a work that has the potential to bring about a great change in the society's garbage collection system, adhering to simplicity.
This Page Has Inspired
1135
People So Far..
The garbage menace is one common factor that most of the metropolitan cities all over the world are working on. It is also the most common complaint amongst the dwellers of the society. The ‘World Health Organisation’ (WHO) states that about 4-5% of the deaths each year, all over, are due to the diseases caused by inefficient garbage disposal and about 6% of all ill-health and disabilities also are due to the same. With all the advancement in technology, there’s a desperate need to work on them to cut down the menace.

In an earlier article, I had written about the attitudes required in an aspiring ‘studentpreneur’ of which two were the need to identify opportunities and to start solutions from the root cause. Two girls from Bengaluru have proved the importance of the mentioned attitudes, whilst having created a solution to the garbage collection menace. 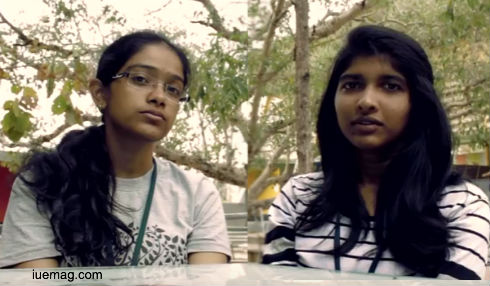 Divya S Hegde and Shravanya R, 4th year students UG engineering students of RVCE, Bangalore, have designed a project christened ‘Efficient Waste Collection Mechanism for Metropolitan Cities’. It is a vision that is driven by the belief that garbage menace can be capped when worked on from the basics - garbage collection. Divya says, “We got our idea by seeing the amount of waste that would flow in the river which is next to our hostel. Also, we used to see the overflowing bins in the residential areas where the waste would overflow on the roads and hence would pose a threat to the health of the residents.” Garbage collectors, many a times, have been left fuming, after being sent on duty, but are welcomed to sights of just quarter full waste bins. The other extremity they are made to witness on duty is the overflowing waste sending out foul odour. This poses threats of many a health concern to the collectors. This is the most fundamental aspect in the ever-growing garbage menace.

The ‘Efficient Waste Collection Mechanism for Metropolitan Cities’ aims to work for the cause at the collection stage, as the name suggests. It consists of 3 main components - the sensor, the microcontroller and its interface with the web. The sensor would sense the garbage level in the dustbin and send the data to the microcontroller continuously. If the level is the above the threshold (in their case 85%) then a message would go to the concerned official so that they get to know that the dustbin is almost full and it needs to be emptied. The real time data will be updated on the webpage where one can see the status of each dustbin where their system is incorporated, with automatic reset. The innovators say the smart bin will allow authorities to save resources and time. “This way, garbage could be managed more efficiently. The Swachh Bharat dream could get a boost”, beams Divya.

The duo has definitely had their share of hurdles on their path to glory. But, that definitely hasn’t deterred them from bringing about a change. They also are wary to the fact that hurdles are something bound to crop up during the future endeavours too.

The UN Secretary General Ban Ki-moon had once stated the importance of youth garnering knowledge on the hindrances existing and arising in the society. He also pointed to the fact that youth activism and engagement can bring about important social changes that are sometimes left behind. Awareness of common evils like terrorism, corruption, etc. indubitably exists amongst the mass, but the garbage menace, in which the society is literally drowning, isn’t paid the required attention. Reducing usage of plastic bags will help until a certain extent, but the verity that garbage accumulates in many other forms shouldn’t be forgotten. There are regulations brought in to cut down on the pollution caused, but when there isn’t a system efficient enough to support the same, the whole purpose behind it fails miserably.
Get the Latest & Recommended articles in your Inbox

Subscribe!
The duo had worked out the concept as part of the India Innovation Challenge Design Contest 2016 (IICDC). The 10-month-long competition is jointly organised by Texas Instruments (TI), Indian Institute of Management Bangalore (IIMB) and the Department of Science and Technology (DST).

Impressed by the innovation, IICDC organisers helped Shravanya and Divya connect with Bin Bag, a startup working on waste management. “We were also offered courses and online lectures on the business aspect of it. The next step is to create a prototype and test it,” said Shravanya.

Having carved a niche for themselves, they also stand as paragons of inspiration. They say, “Technology is improving day by day. Being engineers it's our duty to implement what we learn to the improve conditions of our society. To keep the country clean, start from your houses”. There is also stress on the need for cooperation with the garbage collection workers to ensure a cleaner and better nation.

Divya’s and Shravanya’s vision definitely brings a lot of hope for India and its youth! We are absolutely proud of their work and wish that they become the reason to create many more future innovators, not just in India, but around the world, who shall bring pride to their nations.
Copyrights © 2022 Inspiration Unlimited eMagazine

This Page Has Inspired
1135
People So Far..
Any facts, figures or references stated here are made by the author & don't reflect the endorsement of iU at all times unless otherwise drafted by official staff at iU. This article was first published here on 30th June 2017.
Sathwik R
One with a zeal to do good always.