The Largest European Blockchain Conference Was Held in Munich

BlockShow Europe 2017 was held in Alte Kongresshalle, Munich. With 560 attendees, 26 exhibitors, and 26 speakers, the conference became the largest international Blockchain-related event ever organized in Europe. Here is a glimpse of what happened!
This Page Has Inspired
1034
People So Far..
Led by Elizabeth Lumley, the managing director at Rainmaking and one of the most famous women in Fintech, the event covered a number of hot topics ranging from practical application of Blockchain technology to aspects of running an ICO.

Blockchain is believed to bring trust and privacy to a lot of different industries. It’s changing the whole paradigm of how things are done in the production field as well as the logic of business models and our general approach towards partnership and cooperation. 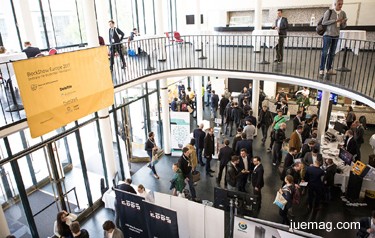 According to Mika Lammi, Head of IoT Business Development at Kouvola Innovations Oy, “Blockchain is the backbone that would connect all the stakeholders together, and the more we know about technology, the more value we can add across industries.”

Bitcoin legend Charlie Shrem compared Blockchain to the printing press and pointed that “the speed of its development is really incredible, therefore it is hard to say what direction we will go”.

He satated: “Initially we all thought that Blockchain is made for financial and banking industry. But look at the variety of use cases we are seeing now. Blockchain allows going directions we all thought were impossible.”

Milan Sallaba representing Deloitte was speaking about practicalities of technology implementation and company’s approach to it emphasized the need to connect startups and businesses: ”On the startup side, you have more ideas inspiration and creativity, but less understanding how the corporate world operates. Therefore we need to ensure the connection between them. That's  what we are doing at Deloitte Blockchain Institute.”

Many speakers noted that people still don't understand what Blockchain is, therefore they can't trust it. Next year BlockShow Europe will be back and will be greater in every aspect – with more sessions, more Blockchain projects, more exhibitors, more people.

The Blockchain Oscar was organized by Cointelegraph Events, Humaniq and WINGS. The first round of the competition kicked off in March with a series of webinars, where participants were pitching their projects and had a chance to shoot questions to experts and members of the jury board. After thorough evaluation they have chosen six startups who pitched their ideas in front of the hundreds of guests at the stage of Blockshow Europe 2017 in Munich.

Addy Crezee, CEO at Cointelegraph Events commented: “We were glad to see such a huge interest in the competition in general, and in every project presented by our participants. Next year we are going to dedicate a separate stage only for the presentation of startups. Participants took this competition very seriously - with long preparations, practices, supporting and cheering for each other. Next year we are planning to expand this competition. Stay tuned!” 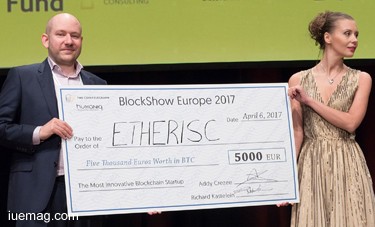 Etherisc was announced the most innovative startup and received €5000 worth in BTC. Company is on a mission to build decentralized insurance applications, making the purchase and sale of insurance more efficient, enable lower operational costs, provide greater transparency to the industry of insurance compared to traditional operations and democratize access to reinsurance investments.

Stephan Karpischek, CEO and Co-Founder of Etherisc, said: “We feel proud and humbled to win the Blockchain Oscar for most innovative blockchain startup. It is a great honor and an amazing boost for our endeavour to create an open protocol for decentralized insurance applications.”

SolarChange left Blockshow Europe 2017 with the title ‘The Most Valuable for Humanity Startup’ and €5000 in Humaniq tokens on top of it. SolarChange is a web&mobile platform which integrates the SolarCoin Blockchain for incentivizing Prosumers towards the Energy Transition. Platform enables solar owners, solar monitoring companies and solar asset managers to register their solar installation and monitored solar installs to the SolarCoin program.

Assaf Ben-Or, CEO and Co-Founder at SolarChange said: “Participating in BlockShow Europe 2017 was a very exciting and rewarding (pun intended) experience for the SolarChange team. Together with our team at SolarCoin, we are proud to offer clean energy users a great way to get rewarded for being active prosumers of sustainable energy sources (starting with solar), while optimizing energy trading (from both production and consumption) through our predictive analysis. It is a case of "the more the better", on many different levels.”

Addy Crezee, CEO at Cointelegraph Events, summed up: “Blockshow has been organized by Cointelegraph Events in partnership with nexussquared and Blockpay for one very important reason  - to provide community members with an efficient business platform for networking, learning, arranging meetings, building the vision of the future and understanding the Blockchain technology.”
Get the Latest & Recommended articles in your Inbox

Subscribe!
Crezee noted that Blockshow is not just a one-time gathering of nerds and geeks, but it is planned as an international business event with potential to grow year by year. He added: “Let’s say now we have 25 business solutions and eight industries. In a year there are going to be 50 solutions in our exhibition hall, and in three years - 150. That’s what we are aiming at.”

The iUeMagazine team was delighted to have worked with BlockShow Europe 2017 as Online Media Partners & to have brought Unlimited Inspiration for all readers from the proceedings of this event.
Copyrights © 2022 Inspiration Unlimited eMagazine

This Page Has Inspired
1034
People So Far..
Any facts, figures or references stated here are made by the author & don't reflect the endorsement of iU at all times unless otherwise drafted by official staff at iU. This article was first published here on 17th May 2017.