Something that's deep, touching, influential, powerful, impactful, rationally thoughtful and irrationally engaging is always simple in its approach; so is the concept of lyrical conversations. Read ON! #LyricalConversations #StayInspiredOnTheGo
This Page Has Inspired
1059
People So Far..
It’s no secret really, what happens in an engineering classroom. Or any other classroom for that matter. Students do what they’re best at - listening as little as possible to the class and deriving as high a score as possible in the subjects, creating layout designs for the notebooks at hand, doodling, playing games, using mobile phones in the classroom for “important” discussions, writing lab records in the class, drawing graphs for that batchmate who just couldn’t get graphs right, and much more.

There was a time when I absolutely hesitated giving my notebook to the professors (professors back then had a habit of checking our notes to see where exactly they had stopped at during the previous lecture) simply because my notes were like the half blood prince’s notebook - only, my notes would not only have shortcuts to detailed explanations on the subject, but also some commentary - and not esoteric at that - which would either amuse or bemuse anyone who read it depending on how good they were at teaching the subject. 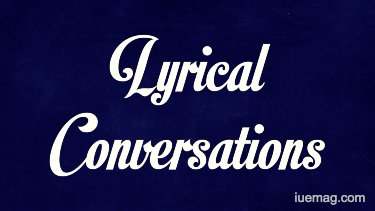 Among the various things we did along with listening to the class and asking doubts, a friend of mine, Shruthi Rao, came up with a rather offbeat, yet interesting concept of “Lyrical conversations” - and thus began our journey into the poetic world. Whether be it about the weather or about some candid opinion about some lecture(r)s, be it about what appeared to be the theme of the class that day, or about some event that had taken place, she would write it all - in poetry, and ask us to reply in kind.
She even had a separate notebook for this. Ever since, there would always be one extra notebook than the number of girls on our bench! Initially we were hesitant - poetry after all is not something everybody is born with. I would scribble what I thought was rubbish only because I didn’t want to be a spoilsport. That’s how it all started. A few months down the lane, it was easily one of our favourite pastimes during breaks between classes. College ended, but Lyrical conversations stuck.

We still have lyrical conversations, this girl and I - if not the rest of our group - be it to discuss some of the storms we’re weathering, or be it some musings we want to share. A joke, some great advice, some inspiration - lyrical conversations have happened through it all - and then it took on a new turn with Sujit Lalwani sir when I happened to share this to him. At first we started to have lyrical conversations with a goal of having a book of those - this was one of the long term projects. Now it has taken yet another turn, and that’s how this article has come to be.

“In a regular conversation, you tend to use prose, and prose may not be emotionally provoking all the time in the same way because you receive it in the mood you are - the moment everything is put into the tone of poetry, you get in to the poetic mood immediately, and then receive it. This definitely helps your bonding, your relationship with the other person, and everything that is conveyed is taken in a positive state of mind or a deeper emotional state, and anything that has deeper emotions attached is going to impact deeper than anything that is surfacial”, he says.

Lyrical conversations are about being poetic when your project is doing great, it’s also about being poetic when your project is tanking big time. All it might need is a poetic bent of mind to turn things around - who knows? Lyrical conversations are those conversations that you have late in the nights, about things that really get to you, they’re the early morning beginners that you have about the strong goals you’re set out to pursue.
They’re the ice breaker between you and your partner after a tough day, they’re a bonding factor if you and your grandparents can write poetically in the same language! (Definitely doesn’t have to be English alone!) They’re the conversations that are going to break misunderstandings (how can you not melt when the bunch of roses sent as an apology has a lyrical note sent with it?!), they’re the ones that are going to add juice to the otherwise mundane life that most people live!
Get the Latest & Recommended articles in your Inbox

Here’s to your beginning of lyrical conversations!
What are you waiting for - pick up a pen and some cherry,
Send across some notes - over road, rail or ferry..
Make haste, and make more merry,
Have lyrical conversations and be high -very..
Copyrights © 2023 Inspiration Unlimited eMagazine

This Page Has Inspired
1059
People So Far..
Any facts, figures or references stated here are made by the author & don't reflect the endorsement of iU at all times unless otherwise drafted by official staff at iU. This article was first published here on 2nd April 2018.
Sandhya Nagaraj
Sandhya Nagaraj is a contributing writer at Inspiration Unlimited eMagazine.