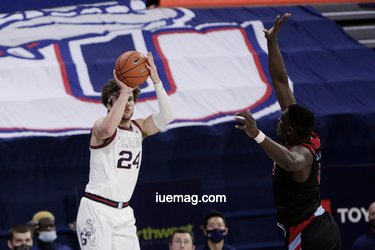 The most recent college basketball rankings were released and to absolutely no one’s surprise, the Gonzaga Bulldogs reign supreme as the top team in the nation with a pristine 24-0 mark. Trailing closely behind are the Baylor Bears whose 21-1 record speaks for itself but their victories over three consecutive top 20 teams have also made a statement.

But the cloud always hovering above Gonzaga is the specter of their competition throughout the season. The Zags play in the lightly regarded West Coast Conference where their only real rival is BYU, and even the Cougars are unranked with a 19-5 record which is comprised primarily of the corpses of their WCC opponents.

You would have to go back to December 26th to find the last time Gonzaga played a team ranked in the top 20, and that was No. 16 Virginia. The Zags defeated the Cavaliers, 98-75, and if you had Gonzaga in your NCAAB picks then you cashed a ticket as they were 7 ½ point neutral-site favorites. The Bulldogs have also beaten No. 6 at the time, Kansas (102-90), No. 11 West Virginia (87-82), and No. 3 Iowa (99-88). Unfortunately, their game against Baylor earlier in the season was canceled.

Therefore, it’s clear Gonzaga has faced some of the best competition in the country but it hasn’t happened in quite a while and they get the luxury of trouncing the tomato cans in their conference on a regular basis. In their last outing, they played the pedestrian-at-best Loyola-Marymount Lions and drew away to an 86-69 win.

But here’s what you should know, the Lions are third in the WCC with a 7-5 conference record and a 13-9 mark overall, yet the Zags were installed as 25 ½ point favorites! They didn’t cover the number, of course, winning by 17 but the point is that there is virtually no competition for them and the argument could be made that their record is misleading, having been padded with victories over inferior conference opponents.

But it should also be noted that Kentucky has a 28-game winning streak dating back to last season and their win over Loyola-Marymount marked the first time since 2014 that a team has ended the regular season with an undefeated record. And another record fell when they won their 21st consecutive game by double-digits as the No. 1 team in the AP Top 25, which broke UCLA’s 49-year record of 20 double-digit victories during the 1971-72 season.

"It's getting harder and harder to find something that's never been done in this program. There's very few things left," Gonzaga coach Mark Few said. "For this group to be able to notch that is amazing, and when you factor in, they didn't have ‘The Kennel' to rely on at all to me is just remarkable."

Senior Corey Kispert nailed six three-pointers and dropped 24 points on the Lions in the season finale but said it has been all about taking care of business this season.

"It did just feel like another game," Kispert said of likely his final home game. "That's just kind of the theme of the whole year. We got to be professional about this kind of stuff. I know, whether we like it or not, there's nobody in the building so you know it hasn't hit me yet."

This Page Has Inspired
1066
People So Far..
Any facts, figures or references stated here are made by the author & don't reflect the endorsement of iU at all times unless otherwise drafted by official staff at iU. This article was first published here on 30th April 2021.