Dr. Satendra Singh - A HERO in Himself!

This Page Has Inspired
1015
People So Far..
“Life itself is full of challenges and if you are leading a life without challenges, then you are not at all living,” says Dr. Satendra Singh a MBBS with MD, and now a disability activist who has faced denials with a feeling as if they were blessings in disguise.

Having contracted poliomyelitis at a tender age of 9 years, he has found inspiration at every step of life which keeps him high and never lose hope or to stop dreaming. He has been successful in turning his dreams to reality. “The whole family has been my support, especially, my mother who inculcated the belief in me to live life not only for yourself but also for others,” says Dr. Satendra.

In the process of growing up life wasn’t easier for him. Having his father in army, Satendra completed his schooling from Kendriya Vidyalayas. He faced discrimination at multiple levels and those made him more determined to resist it. He recalls an incident that left a deep wound in his heart, “The only disturbing memory is that of one of my teachers dragging me (holding by collar) out of the class to prayer assembly area and forcing me to stand on the podium. My fault was that I was exempted to attend the Morning Prayer assembly as we had to go in queue and there were steps towards the assembly area. I least expected it from a school teacher, but later there were many teachers who shaped my career and life.”

Even in the new millennium, people with disabilities are largely marginalised. He mentions, “The discriminatory attitude is highlighted not only by common people but sadly, also by few educated, elite, powerful class. Despite this, I was and am very lucky to have found mentors throughout during my school days, my MBBS/MD period, and as well as at my current institution. My family, my beautiful wife, in particular, manage the home effectively to give space to my ideas to grow.” 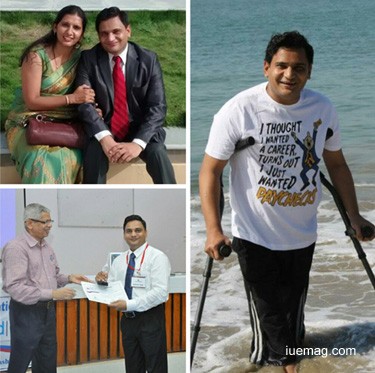 The one who takes discrimination as an inspiration is the one who succeeds and so did Dr. Satendra. All the discriminations and rejections were taken as inspiration by him. “All of it began with some sort of discrimination towards me,” he says. He first observed and experienced the major difficulties faced due to disability such as inaccessibility of essential services like health care, ATMs, Post offices, polling booths, metros or railways or the bigger attitudinal behaviour of bus conductors, screening staff at airports or UPSC/MoHFW. Having experienced all, he took little steps and raised his voice. “Being a person with locomotor disability doesn’t mean that I cannot stand up for my rights, and there is much more to be done,” says Dr. Satendra. He only demands their basic human rights, not the optional luxuries while the oppressive attitudes only fuelled his fighting spirits. People with disabilities are the world’s largest minority and 80% of these live in global south. In our country alone, 70% lives in rural areas where knowledge of rights is abysmally low. "We need Universal Design in every new construction. This is a bare minimum and will not only help disabled people but also elderly, pregnant women, and children," mentions Dr. Satendra.

On being appointed as the Coordinator of Enabling Unit for people with disabilities at the University College of Medical Sciences & GTB hospital, he firstly included people with disabilities among students, faculty & non-teaching employees in line with ‘Nothing about us, without us.’  During this he realised that students with disabilities are facing problems in hostel because of inaccessible entrance. He followed up the matter with authorities and despite numerous reminders for one and half years nothing happened. “It gave me great pain to see my students facing inaccessible conditions and the black armband silent protest was to condone the inaccessible conditions silently on International Day of the Persons with Disabilities 2012. The very next day, money was sanctioned and in a short time ramps were constructed not only outside all the hostels but also outside ATM, post offices and shops,” he says proudly.
According to Dr. Satendra, the first and foremost is - inclusion of people with disabilities in all policy matters. Charity terms like ‘specially abled’ and ‘differently abled’ won’t please. They rather ridicule. The golden rule to empower disability is “Nothing about us, without us”. The Govt has many concessions and benefit schemes but the problem is that only 22% in Delhi & 38% overall India has the magical ‘disability certificate’ to avail this. The irony is that even if one has this certificate, it is not valid across India.  How do we achieve Post2015 Sustainable Development Goals if we do not have this basic requirement? Nobody knows our numbers. Censuses are flawed as the recent scientific estimate by PHFI found 12% to be disability estimate in Telangana but sadly Census 2011 only states 2.2%

The biggest hindrance facing PwDs today is, perhaps, lack of accessibility in every sphere of life. There are barriers to access public facilities, public buildings and transport. Centre is contemplating to launch a massive campaign to sensitise people on accessibility issues 'Sugamya Bharat' (Accessibility India). However, the harsh reality is that basic necessities are not available; so, forget about recreational services.

It was the eve of International Day of the Persons with Disabilities 2010 when Dr. Satendra first framed few lines titled ‘Infinite Ability’. It was later accepted as a publication in poetry section of BMJ Medical Humanities journal. His mentor Prof. Navjeevan Singh inspired him to start a disability subgroup under Medical Humanities Group. In June 2011, the group was formed and named Infinite Ability.

The vision of Infinite Ability is to explore disability through creativity. It was created to utilize medical humanitarian approaches like Theatre of the Oppressed, Graphic medicine, narratives, interpersonal & communication skills to explore disability and chronic illnesses. Dr. Satendra mentions, “We have so far organised workshops using Theatre of the Oppressed (courtesy - Radha Ramaswamy of CCDC) and Blind with Camera (Partho Bhowmick). We have also invited role models with disabilities like Madhu Sharma to break common myths associated with disabilities.”

Based on Dr. Satendra’s petition, Medical Council of India (MCI) asked all the medical institutions in India to be disabled friendly. However, barriers do not mean physical barriers alone. There are barriers to information as well as attitudinal barriers. He is persuading MCI to include disability education in medical curriculum. He is also campaigning for including PWDs in the national HIV response as they are excluded. “Medical education and medical humanities is my interest area as evident by our journal ‘Research & Humanities in Medical Education (RHiME)’ where I am the Associate Editor (www.rhime.in),” he mentions.

He is an Anil Kapoor fanatic and the first film he watched was Zindagi. The words- Har kadam ek nai jung hai, gave him a lifelong lesson.
Copyrights © 2023 Inspiration Unlimited eMagazine

This Page Has Inspired
1015
People So Far..
Any facts, figures or references stated here are made by the author & don't reflect the endorsement of iU at all times unless otherwise drafted by official staff at iU. This article was first published here on 7th April 2015.
IJ Anita Tejwani
IJ Anita Tejwani is a contributing writer at Inspiration Unlimited eMagazine.