New Zealand: A World of Light and Treasure

This Page Has Inspired
1113
People So Far..
Long ago, the Lord of the Forest, Tāne-mahuta, was tired of a world immersed in inky darkness. He was trapped between the tight embrace of his mother and father. His father was Ranginui, the sky. His mother was Papa-tū-ā-nuku, the earth. Together, they bound him in place devoid of all light. With decisiveness and strength, Tāne-mahuta pushed his mother and father apart, creating the world of light.

So it goes in ancient Pūrākau, the legends of the New Zealand’s indigenous Māori people. The Lord of Forest’s act was one of fierce independence and creativity. He transformed a stifling environment into our world, creating beauty, freedom, and nature’s innate music. Today, Māori guides greet Tāne-mahuta in the forests of ancient and stately kauri trees with deep-throated sacred songs called waiata. 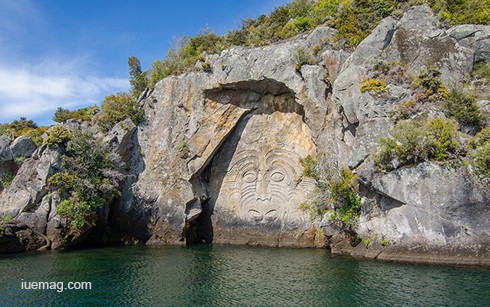 About 75% of the Māori live on New Zealand’s North Island. The brilliantly independent spirit of these people permeates the culture throughout the country, investing New Zealand with a unique sense of identity. The people here have incredible respect for the Maori heritage and legend. To explore New Zealand is not just to see the sights; it’s to experience first-hand the spirit of a world of light and music.

There’s treasure to be found here, too. Wellington is New Zealand’s capitol, located on the shore of a deep, green harbor. Not long ago, a diving clean-up crew discovered 868 gold coins in Wellington Harbor. Regardless of any sort of value the coins have today, this speaks to an immense, lost past, the kind I dreamed of as a child—the world of pirates, of legends, of intrigue. There’s nothing like indulging childhood fantasies. And New Zealand is the perfect place to do it.

On the east side of the North Island is the gem of Waihi Beach, with shimmering teal waters and golden sand. This isn’t called the Bay of Plenty for nothing. The town of Waihi is an old goldmining site, and Waihi Beach is a great place to try out some underwater metal detecting. You’re more likely to find treasure beneath the waves than on the beach.

It’s legal to take a metal detector on the airplane (you’ll need a waterproof VLF or Pulse Induction model), and you’ll need a short or long-handled scoop. You may find stray gold nuggets from the old days of goldmining, and out in the higher water, you may also find jewelry and coins lost by swimmers. If you’re planning on doing the deeper water detecting, be sure to bring your snorkel.

Even if you don’t find anything, the process is well worth it. You indulge in the beach and the surf in a way completely different from anything you’ve experienced before.

Elsewhere on the North Island, you can experience the incredible diversity of things to do. At Auckland, you’ll find a bustling cosmopolitan metropolis with more boats docked than any other city in the world. You can explore the city, shop, and eat at the many restaurants, or travel about an hour to Karekare beach, where you’ll feel like you’re on a different planet. It’s a rugged a windswept spot with a surf club if you want to test the waves.

Lakeside at Rotorua, you’ll find hot springs and plenty of Maori cultural offerings, such as the Maoria Arts and Crafts Institute in Whakarewarewa Reserve. Try taking part in a hangi, the Maori word for feast. They cook the food underground, where it’s heated by thermal springs. At a marae meeting house you can have a hangi feast and watch a concert. If you’re interested in fishing, there are eleven lakes near Rotorua where you can catch trout.
Get the Latest & Recommended articles in your Inbox

Subscribe!
If you’re interested in a thrill, the Waitomo Caves near Hamilton have a rappelling station that takes you 300 feet down the limestone wall into immense caverns. You don’t have to have any experience to do it, just daring and an adventurous spirit.

These are just a few of the things to do and places to go in glorious New Zealand, a world of light and treasure. Whatever you do, be sure to take your time. Each experience and each place is worth indulging to its fullest, taking it in with no other goal in mind.

This Page Has Inspired
1113
People So Far..
Any facts, figures or references stated here are made by the author & don't reflect the endorsement of iU at all times unless otherwise drafted by official staff at iU. This article was first published here on 6th August 2016.
Daniel Matthews
Daniel Matthews is a contributing writer at Inspiration Unlimited eMagazine.