Theater, from acting to directing, from a mathematical perspective

This Page Has Inspired
798
People So Far..

First of all, is there really a connection between art and mathematics?

Mathematics is used in many professions (and in everyday life), and the theater industry is no exception. However, we focus so much on separating art from science that we educate ourselves to see them as polar opposites. I think that this process begins in school, where we are easily labeled as ‘more skilled’ or ‘less skilled’ in mathematics. If you don't look deeply for the reasons that give rise to this antipathy for a certain field, you will most likely live your whole life with the conviction that you can't do well in that field. You don't know how and why, but you will have a feeling that ‘it's not for you’. Unfortunately, there are too few who, in their childhood and adolescence, analyze this. When this antipathy gets deep-rooted, the relationship between the student and a certain subject is often broken.

Mathematics, let's face it, is not the best friend of most students. But I still think that of this majority of students- at least a quarter (realistically speaking) could be closer to it, if it were appropriately presented to them in a positive and warm light.

Personally, I count myself among those who have lived with the conviction that mathematics is a black hole, the unknown impossible to understand. I've always wanted to do theater, so I didn't migrate there to get away from mathematics, but if I had a choice between mathematics and any other field, mathematics would definitely not have been a priority.

However, while studying theater, I gradually discovered the imprint of mathematics on everything a performance means. First of all, the performance itself, which is defined by attracting and maintaining the attention of an audience, which, here, is common to both scenic and mathematical art, and then its components: acting, scenography, choreography, direction, all use subtle mathematical language, if you analyze it. 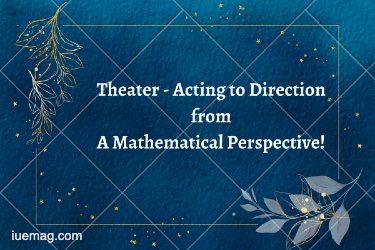 How are theater and mathematics related?

Set designers frequently use geometry to calculate angles, lengths, and heights, which are then translated into decor elements built on the large scale of the stage.

The Denver Center for the Performing Arts has released a video series called Standing Equation, which shows the common ways math is used to build sets.

When it comes to creating and assembling the stage set, precision matters. We must take into account the shape of the stage, its size, the angles from which the light falls, the mechanical movement, translated here by the actor's movement in available space and his relationship with the space and the other actors; but very importantly, the depth of the stage. The depth of the stage allows the simultaneous creation of several game spaces, the creation of illusions, and overlapping or parallel spaces, both in terms of place and time.

Theory may sound a bit confusing, but the practice is a fascinating discovery, especially for the creative artist who prints his scenic vision and not only for the viewers. Nothing, on the stage and in the construction of a show, is accidental. That's why I like to say, the director is often a mathematician still undiscovered. In fact, I have worked with directors who had studied mathematics, before theater studies, and the imprint was immediately felt in the way of working- in their discipline, the lightness, and their precision in building the show.

Are there plays that talk about mathematical theories?

A Disappearing Number is a 2007 play written and conceived by the Théâtre de Complicité company and directed by the English playwright Simon McBurney. It was inspired by the collaboration between Ramanujan, a mathematician from India, and Fr. G.H. Hardy from Cambridge University in the 1910s.

The play has two dramatic plans. interweaving the intellectual relationship between Hardy and Ramanujan, with the story of an English mathematical lecturer ‘Ruth’ and her husband Al Cooper, an Indian-American businessman, exploring the nature and spirituality of the infinite.

[Brief of the story:]

Ruth travels to India in the footsteps of Ramanujan and eventually dies. Al follows, to get closer to her ghost. Meanwhile, 100 years ago, Ramanujan had traveled in the opposite direction, making the journey to England, where he works with Hardy on mathematics and contracted tuberculosis. Partition (as a mathematical concept) is explored, and divergent and convergent series in mathematics become a metaphor for the Indian diaspora. [Source: Wikipedia]

A Disappearing number is a good example of the idea of immersion. Immersive theater, unlike classical theater, invites the audience even more into the story. It invites the people to the stage and allows them not only the interaction but also the possibility to be the creator of the story, and a character with decision-making power in the trajectory of the show and the action. It allows the audience to get into the skin of the character.

Just as the actor has to become the character he plays, he needs to bring himself to get identified as the character, at least in some moments; in the same way, the mathematician has to see himself, to become as concrete as possible in the "skin" of the objects he works with. Such a personal, immersive experience makes it possible to create a trajectory that facilitates the solution of a problem, which - in general - is more difficult; how do you "play" a number or a geometric space?

Drawing a parallel with the construction of a dramatic character: where as much information about him helps to outline him as truthfully as possible); in mathematics, helped by the biographies of researchers, by the history of concepts, you can manage to "transpose" yourself among the mathematical objects you work with [at least in some measure].

The more information you have about an object, the greater are the chances that you will be able to experience it immersively- think like it, and function like it. You experience another form of existence, without losing yourself.

Is virtual reality the result of mathematics and theater/film?

Virtual reality seems to me, currently, the most concrete fusion between theater and mathematics, geometry - in particular.

For example, the Calcflow application, intended for learning mathematics through play and by experiencing virtual reality, allows you to explore different scenarios and mathematical theorems in an interactive environment. The TIM project, Theater in Mathematics, designed to combat the fear of mathematics among students, best demonstrates the fact that immersive learning has tangible benefits. TIM succeeds in teaching mathematical content through dramatic strategies.

The process with the preparatory activities of a play, respectively a show, is presented. Another similarity I notice between theater and mathematics [very important in my field]- we are often told: when you write a play/stage a show, you always have knowns and unknowns. The audience wants those unknowns to become known, it needs a solution. Especially in realistic-psychological drama, I'm interested in what's beyond what the character says, what I don't know about him. He tells me something, but I'm interested in solving the situation, not just being told about it. I'm interested in how it got there and, knowing, in the end, the unknowns, what is the Solution, and the result.

Is mathematics the actor's playground?

Yes, it is. The scene itself is a mathematical cube. The six square faces of the mathematical cube are the stage itself. The stage, although not obviously built as a cube, due to the need to allow the audience to look inside it, remains a cube. A transparent cube, if we want, inside which an action takes place in which the viewers can participate. Besides, in the theater, we have the technique of the fourth wall. The fourth wall is the imaginary "wall" in front of the stage - located between the audience and the actors. So, at first glance, we have the square as the stage, if we don't take into account the floor, on which the actor is acting, and the ceiling, to which we give so little importance, but which illuminates the entire playing space and makes it possible. So, here’s the cube!

Breaking the fourth wall involves a character's interaction with the real world. The actor speaks directly to the audience, asks them questions, tells them something personal, and takes the form of a 1-to-1 confession, keeping them focused.

Here’s teaching math on the stage and how I discovered math in my artistic field while creating.

This Page Has Inspired
798
People So Far..
Any facts, figures or references stated here are made by the author & don't reflect the endorsement of iU at all times unless otherwise drafted by official staff at iU. This article was first published here on 9th December 2022.
Ana Sorina Corneanu
My name is Ana, I love writing, I believe in our best self and love.