Visit Calangute - The Most Breathtaking Beach in Goa

This Page Has Inspired
651
People So Far.. 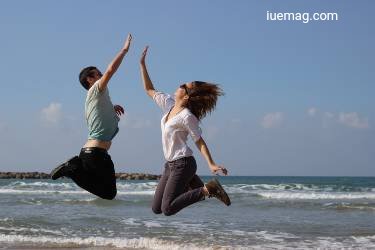 The state of Goa is one of the world's most popular tourist destinations, situated in the Konkan region on the western coast of the Indian peninsula. It has more than 125 kilometers of coastline, 83 of which are beautiful beaches surrounded by palm and coconut trees and lapped by the Arabian Sea.

It is well-known for its breathtaking scenery, temple and church architecture, and, most importantly, for its extensive stretches of stunning sandy beaches. These numerous beaches are separated into North and South Goa beaches. While the beaches in the south of Goa are calmer, more remote, and less commercialized, those in the north of the state are full of activities. Let's take a closer look at a few of the most well-known ones while you plan your stay at Vila Goesa beach resort in Goa.

Given below are the most famous ones out of all.

This beach in North Goa, is an exciting and happening area: It is also known as the "Queen of Beaches," and it is without a doubt the best and most well-liked. Hundreds of shacks and other lodgings line its perimeter. Foreigners can be seen sunbathing in reclining beach chairs on the most commercialized beach. Additionally, there are high-end restaurants in the vicinity that offer excellent wine and food. Here, you can participate in a variety of water sports like parasailing, water skiing, and windsurfing.

The fact that this beach begins where Calangute ends and is less crowded and more developed makes it stand out. Its pristine white sand, the Retreat House perched atop a hill, and the fact that there are fewer tourists there has enhanced its scenic beauty. Famous nightclubs in the area are Cafe Mambo and Club Tito.

The Chapora Fort is close to this crescent-shaped beach at the base of a cliff. The beach is dotted with numerous outcrops of red laterite cliffs and surrounded by palm trees. Additionally, trance parties are extremely popular. It offers a lot of choices to eat as there are numerous cafeterias and resto-bars.

The beach's white sands and the red laterite rocks found here create a one-of-a-kind combination. The ocean side is popular for its 'Wednesday Swap meet' which draws in colossal groups. It is a must-visit for people who enjoy shopping and are good bargainers because it sells everything from T-shirts to snacks and ornaments. Hippie culture and trance parties have made Anjuna famous. Tourists from all over the world love Goa Trance's music.

This beach's proximity to the "Aguada Fort," a historic Portuguese structure built in the 17th century, is its main draw. The Fort Aguada Hotel complex was built around the remains of this fort. The hotel's guests mostly visit this beach because there are many cafes, vendors, and water sports to choose from. 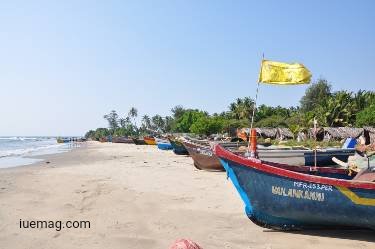 Given below are the main South Goa beaches.

The tranquil and isolated beaches of Palolem, South Goa

This picturesque crescent-shaped beach, which is about a mile long, is one of the most idyllic beaches in Goa. Along the beach, tourists can enjoy a variety of restaurants and resorts with bamboo huts. These resorts range in quality from the cheapest to the most expensive.

The beach takes its name from the small town of Varca, which is located in the South Goa district. Popular beach resorts in this area include the Club Mahindra Varca Beach Resort, the Serenity Residency, and the Radisson White Sands Resort. Goan food and seafood are available for a reasonable price at several shacks along the beach. Boat trips are sorted out for the vacationers for dolphin watching.

The beach, which is at the southernmost point of Goa's coastline, is a great place to unwind and unwind. The long, stunning coastline is dotted with swaying palm trees and features seawater lapping against the beach's white sands.

Calangute beach is also known as the "Queen of beaches," and it is situated on the Arabian Sea's shores. The local vernacular name Koli-gutti, which translates to "land of fisherman," appears to be distorted in Calangute. Because of its stunning beauty and charming nature, it enjoys worldwide acclaim. Partake in the sandy joy on the rug of earthy-colored sands.

The hippies were the ones who found the beach. In the 1960s and 1970s, it became a cliche among tourists. The immense scenic charm and tranquility of the area attracted thousands of European tourists during the hippie era. They appreciated the serene bliss and picturesque locations.

A paradise for Beach Lovers

The palm-lined, sandy beach draws tourists from all over the world. It is now and again visited by a large number of wayfarers to spend their excursions. Calangute Beach is a great place for nature lovers who want some peace. The location is a beach lover's dream because of the stunning view of peaceful locations.

It is a great place for tourists to relax in the warm sun. Relax on the beach's golden sands. Relax your body while sipping exotic-flavored drinks under the shade of colorful umbrellas. Enjoy the benefits of sunbathing, which are good for your body and soul. They are completely enchanted by the exhilarating experience of bathing in the turquoise water.

Angling at the Beach

Aside from having fun in the sun and sand, you can also enjoy some water-based activities. Calangute ocean side is otherwise called fishing ocean side since it gives enough of a chance to calculate. With the aid of a fishing rod, spend some time with your loved ones fishing.

Foodies' Delight
Get the Latest & Recommended articles in your Inbox

Subscribe!
After engaging in amusing activities, it is time to feed your pet. The beach is a great place to indulge in a wide range of delectable Goan seafood. Foodies will love the stalls and shacks under the palm grooves, where they can sample fried prawns, fish, and other seafood while sipping chilled beer. You can go to Goa with your family, by yourself as a backpacker, with a group of friends, or for your partner's honeymoon. You will undoubtedly be captivated by this nation of idyllic, sun-kissed beaches during your stay at Vila Goesa beach resort in Goa.
Copyrights © 2023 Inspiration Unlimited eMagazine

This Page Has Inspired
651
People So Far..
Any facts, figures or references stated here are made by the author & don't reflect the endorsement of iU at all times unless otherwise drafted by official staff at iU. This article was first published here on 21st December 2022.