This Page Has Inspired
1232
People So Far..
Danny MacAskill is a professional Scottish street trials rider, born and raised in Dunvegan on the Isle of Skye. Danny has always had a passion for riding bikes. “I have been obsessed with bikes ever since turning my first pedal at 4 years of age,” he says. In his early days he worked as a bike mechanic and spent his free time improving his riding skills.

Danny began developing his unique riding style in 1996 and is now seen as the icon for Street Trials – a discipline that combines trials and street BMX. “I have always just ridden my bike for fun and never really thought about being good at it. Riding bikes is just what i do much like other people enjoy playing football or go climbing during the weekend. It's pretty crazy to think I get to do it as a job now,” he laughs.

During Danny’s visit to the Sir Chris Hoy Velodrome in 2012, he recalls the words of Sir Chris Hoy, “Danny can turn a fairly mundane object on the street into something interesting and it’s not just the skill, it’s the bravery of what he can do.”

On April 19th, 2009 Danny released a street trials video on YouTube that was about to change his life. Filmed by his flat mate Dave Sowerby, Danny’s self-made video “Inspired Bicycles” reached over 350,000 views within 40 hours after going online. Danny’s YouTube clips have over 65 million views in total. 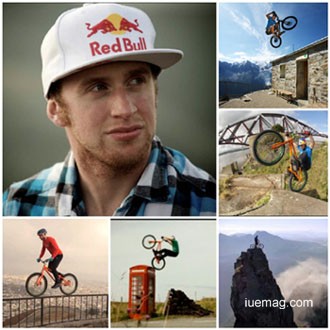 “By the end of shooting ‘Inspired Bicycles’ I felt like I had done all the lines I really wanted to do in Edinburgh and was very happy with the way the video turned out and this is my favourite among all,” he mentions.

Since then, things progressed really fast. He joined a Hollywood production, and was seen in ‘Premier Rush’, he also appeared in TV-commercials and was nominated for many significant awards for example the National Geographic Adventurer of the Year Award 2011. He was the nominee into Laureus World Sports Award “Action Sportsperson of the Year” in 2010

“My bike is really my life. It's pretty much all I think about and if I didn't ride it, I would have no idea what I would do,” says Danny.

Despite his global fame and popularity, Danny remains a humble and humorous guy. Many fellow professionals and members of the bicycle industry value his professional attitude and dedication.

Danny now spends most of his time traveling, in search of new, exciting locations and doing shows all over the world. But in his free time he still enjoys relaxing with friends or escaping into the mountains for a spot of freeriding on his bigger bike.

“Ever since I got my first bike I have tried to do tricks (skids and wheelies) on it. Today I look at my riding exactly the same way. I just ride to have fun. I like how there are no rules on what I can and can't do on my bike. I love to come up with an idea for a new trick and go out the next day and try it,” he says cheerfully.
He has started a new team of riders called Drop and Roll. So they not only tour around and do shows but also plan on making a lot of video projects with the team. So maybe we should keep an eye out for something new with every video coming up from Danny MacAskill.
Copyrights © 2023 Inspiration Unlimited eMagazine

This Page Has Inspired
1232
People So Far..
Any facts, figures or references stated here are made by the author & don't reflect the endorsement of iU at all times unless otherwise drafted by official staff at iU. This article was first published here on 18th December 2014.
IJ Anita Tejwani
IJ Anita Tejwani is a contributing writer at Inspiration Unlimited eMagazine.