In this era, where it is hard to even get a job, here is someone who gets his first job as a Product Head, the designation which is generally a designation to reach for someone after years of work in the company. Read on!
This Page Has Inspired
1257
People So Far..
Meet Mr. Avinash Shinde, who just graduated from his management studies and is currently working as the Product Head at adventor.co, the first online booking platform for all adventure tours globally. Let us see how he achieved to grab this designation at such an early age.

Brought up in Maharashtra, India, till the age of 10, Avinash was someone who was always enthusiastic and active in events of all kinds. The family happened to move to Jamkhandi, Karnataka, where he continued his studies and all his activities, especially sports, which was of his major interest. In his eighth grade, Avinash was selected to represent his school in district level competitions. Although his family was not in a situation, where they earned good money because of his father not knowing the regional language since they had moved from a different state(We all know that India is a land of hundreds of languages and culture), Avinash was never made to feel lesser than anyone else of his age and was given all that he needed. in spite of the struggles in the family. Situations got better, but, now was the biggest challenge of his life. He had to move into another city for his engineering course and was the first ever time he had to live away from his family. He still chose to do what his parents wanted him to do and got his admissions at BLDE college of Engineering in Bijapur, Karnataka. He got adjusted to the new environment, observed and learned from every small happenings around him. He had a lot of friends with whom he enjoyed. 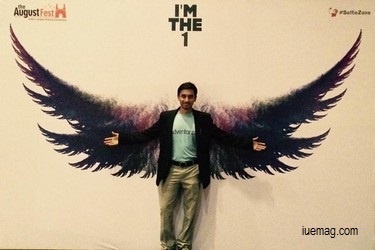 Years passed, he worked harder, completed his engineering with a distinction and made his family proud. He got placed in a company where he wanted to work too. Then, was again a hurdle, when he was forced to take up management studies. He had never disagreed to his mother’s words, because of which, he applied for colleges in Bangalore for higher studies and was lucky to get selected in one of the top colleges of the city, BMS College of Engineering, Bangalore. “It was hard at the beginning, since I had to communicate to everyone in English and I was in a city where every student knew how to converse in English. I started reading English newspapers and communicating to my friends and lecturers in English, to improvise. Although I was forced to take this decision, I am glad I studied at BMSCE, because, my life changing journey started here. Every Saturday they organized guest lectures in my college, and I happened to meet this energetic man who just blew us away with his highly inspiring speech. I was so motivated that I went and searched about his information via the internet. He was Sujit Lalwani sir, international inspirational speaker who has inspired millions of people across the globe. I somehow wanted to connect to him and I also got to know he had founded a platform for youth, called as i3-influence, inspire, impact. With no second thought, I registered to be a part of this amazing platform” he says.

His journey at i3 was incredible, where he executed numerous of social projects under the guidance of his mentors. He became the reason to impact masses, inspiring them to become better individuals. He executed twelve different social projects that included iU literacy campaign, women empowerment campaigns and more. Because of his extremely dedicated work, he was chosen to be one of the TRUE IUITEs, which is a title given to the best performers at i3. He recalls, “While I executed these projects, I improved my skill to communicate, I learned how to inspire people, I gained a lot of confidence. I must say, it all happened because of my mentors who guided me. Not just during i3, but, even after i3, I stayed connected to my mentors and always asked them, what more I could do to improve myself. They always guided me to do something that only added value to my life. I finished my college and also got placed in a reputed company, but, I was not a person who wanted to work, just for the sake of money. I wanted to grow higher. Once again, I discussed with my mentors - Sujit Lalwani sir and Kunal Taswala sir, about this and they became the reason for me to get recruited at adventor.co, founded by Chetan Yellapurkar sir, who is an adventurer himself and was one of the best counsellors at i3. Because of my experiences in executing projects, I was directly chosen to work as the Product Head of the company. That was when I realised the value of the projects I had executed earlier. I wish everyone got the right mentors like me! Thanks to i3 and my mentors for making me what I am today”.
Get the Latest & Recommended articles in your Inbox

Subscribe!
It never matters where you are from, as far as you are focused on growth. When you are willing to learn, you will definitely search for the person who can guide you to achieve what you dream of! Avinash’s only mantra to attain success is, “ABC - Always Be Connected to mentors”, because of which, today, he lives a life which no other ordinary individual could get!
Copyrights © 2023 Inspiration Unlimited eMagazine

This Page Has Inspired
1257
People So Far..
Any facts, figures or references stated here are made by the author & don't reflect the endorsement of iU at all times unless otherwise drafted by official staff at iU. This article was first published here on 3rd December 2015.
IJ Kavyashree
IJ Kavyashree is a contributing writer at Inspiration Unlimited eMagazine.