Read the story of the lady who, from a stage where she only lived a life, dreaming and thinking that it could not turn into reality, to becoming one of the most demanded lady speakers of the country!
This Page Has Inspired
1518
People So Far..
To be born as the youngest child in the family is considered lucky, since, the child is pampered and is given a lot of priority when compared to any other person in the family. Having been brought up in such a family, she grew up being loved by everyone around. School was her enemy when she did not have a hold on languages, which troubled her studies and hence, she happened to change her school of study, where she was motivated to learn better. “I started practicing on my languages especially English, I still remember those days when my English teacher would ask us to imagine ourselves as a pen and write an essay about it. I would come home and imagine myself to 10 other different things and would write essays. This increased my thirst towards writing” she says. This way she enhanced her language skills. It was in her 8th grade when she happened to win a prize for her speech in Hindi, which got her continuous applauds for 5 minutes, which  became a self-booster for her to speak more and do more. She continued to participate in more activities where she continued to win prizes.

Such recognitions continued to reach her in her college, ASC Degree college, Bangalore, where she pursued her B.Com. She was an average scorer and after all, she knew life is all about gaining knowledge, but, also respected every mark she got for her hard work. She also continued participating in events of her college, like singing, dancing, debate competitions and what not! She would win them all. There was a time when she realized her life was blank with no future plans and this moment, gave her the trigger to become an inspirational speaker who has today, inspired thousands of youth from across the country, mentored hundreds of youngsters to achieve great heights. Meet Jeevitha DM, who is so called ‘the fireball’ because of her highly energetic speeches that just brings every listener to only know, they can also dream big and live a successful life.

Jeevitha was like every other student in college who had dreams, but, always wanted to create her own identity, amidst the mass crowd, when, she happened to attend a conference that changed her perspective of life. She got an opportunity to listen to the international speaker, Mr. Sujit Lalwani, who ignited the souls through his inspiring words and Jeevitha decided that he was the person who could help her lead the life she wanted, but, she also knew she had to work equally hard to achieve her dreams. She recalls, “In the feedback form that was given to us after the conference, I had written ‘meet you soon’ to Sujit Lalwani sir and that happened soon after a week, through the platform iu1010, founded by him. I could not be a part of it due to a lot of issues, but, I only had the urge to have a proper goal and a mentor who can lead me. It was more than 8 months after this meeting, and by now, my dreams were much more bigger, but, luckily, I could connect back to the platform of iU1010 and another platform, i3, which was founded by Sujit sir”. 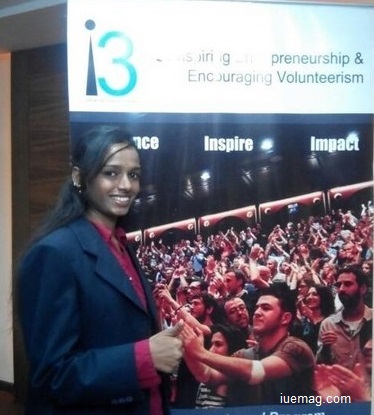 Her experiences at iU1010 made her extra-ordinary from ordinary. She happened to execute numerous of social projects like iUY2C impacting and inspiring the government school children, sports equipment procurement campaign where she became the reason to gift hundreds of children, sports equipments that could help them achieve their dreams to become sportsmen. She happened to initiate her own project called, ‘Passion to Profession’, where she inspired thousands of youngsters to follow their passion and convert it into their profession. She flied with colours when she graduated from iU1010 as the ‘Superstar’ of the season.

Immediately after she passed out of iU1010, she continued her inspiring journey at i3, a platform that has been the reason to give a new life to help the youth move closer to their dream. She got connected to personalities and entrepreneurs from varied fields through the platform and gained higher perspectives about life. Once again, she executed various social projects at i3 and became the only girl to become one of the 5 True IUITEs of the season 1 of i3, Bangalore(True IUITE is a tag given to the best performers of the season). Jeevitha has impacted, not less than 20,000 people during her experience at iU1010 and i3.

She continued to stay connected to her mentors, improved her way of communication, got invited by  various schools and colleges from across the country for her inspiring speeches. She involved herself in organizing a massive event Run4OSCAR, a 5 KM Fundraiser Event which saw participation from hundreds of students, professionals and corporates. One incident that happened to prove her worth was when she was rejected by many companies in the recruitment process. Guess the reason? She was rejected with the reason that said she was ‘Highly Qualified’. One of the renowned companies that once rejected, called her back, to join them at a higher position and better salary, but, this time, she rejected the offer since, she had already secured a job that she loved. “My mom and dad are the heroes of my life. The pain and sacrifices that they have undergone, cannot be repaid in any form. My parents and my sisters were all time there to encourage me. My mentors equally played a huge role in making me what I am today. A platform is a must for anyone and everyone to help achieve their dreams” she says.
Get the Latest & Recommended articles in your Inbox

Subscribe!
This is life my dear friends. A girl who once felt lost, amongst a huge crowd of people, is now recognized amidst the same crowd. Jeevitha’s dream to create her identity has now come true and she continues to work harder to inspire more lives. Her speeches become more energetic every time she is on a stage, because of the strength she gets, in working harder and bringing better results. More such leaders are needed to turn the fate of the country from ‘developing’ to ‘developed’!
Copyrights © 2023 Inspiration Unlimited eMagazine

This Page Has Inspired
1518
People So Far..
Any facts, figures or references stated here are made by the author & don't reflect the endorsement of iU at all times unless otherwise drafted by official staff at iU. This article was first published here on 13th December 2015.
IJ Kavyashree
IJ Kavyashree is a contributing writer at Inspiration Unlimited eMagazine.