Mr. Yogendra Singh Rathore is an aspiring entrepreneur, motivational & inspirational speaker, memory guru and youth icon of myriads of youth across the country.

On the surface, it seems very easy to write an article or biographical sketch of well-known personalities such as Yogendra Singh Rathore or so. But practically, it is a difficult thing to study the inner scaffolding of such a person. As, for that, one has to go into their shoes to show their real personalities. One has to analyze, scrutinize and explore or unleash the very core of the personality.

Let me just commence with what he is for his fans:

His early life, education and becoming an entrepreneur:

Yogendra Singh Rathore was born on 10th of July, 1987 into a Rajput family at Bagoli - a village located in the Indian state of Rajasthan. His father Ranveer Singh is a government employee in Agriculture department and his mother Prem Kanwar is a home-maker. He has got one elder sister and one younger brother. 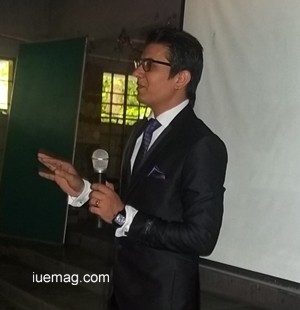 In the year 1992, this Rajput family came to Ajmer and he was admitted in an English medium school- Dayananda Bal niketan. He used to be among the toppers from the very beginning to the completion of the education. Bieng a student, his memory was sharp as a sword. He was able to learn difficult things or topics with an extra ordinary ease. Concentration and perseverance were his innate qualities. He never ran after success, but he beguiles the success always after him. He was very friendly to all. He put equal concentration in the academics as well as sports, one thing that I like most about him is that his craziness about the goal. He rarely participated in any extra-curricular activities hitherto. In 2003, he passed his secondary examination with excellent marks. Then, he decided to go in some CBSE school. So, he took admission in demonstration school, Ajmer and opted for PCM as they were his favorite subjects. He was among the toppers. Th,ere he felt the importance of extra-curricular activities in the life and started taking active participation in it. One thing I forgot to tell you is that he is a poet from very childhood.

In this way, in 2005, he passed senior secondary with high percentile. After that, he gave various competitive examinations like AIEEE, NDA, RPET or so and got the splendid success in all. He chose engineering out of them. He got the admission in the well-known engineering college-"Nirma institute of technology, Ahmendabad. While doing his B.Tech, he came in contact with a network of entrepreneurs. He also joined that networking group. Soon, he became a good entrepreneur. That’s when he developed himself as an ardent entrepreneur. He passed his B.Tech with first class, with excellent grades. So far, I have discussed his personal and academic life, now I would like to tell you about his social family and career life.

Socially, he is a gregarious person. His charismatic personality used to make people not only his friends but fans irrespective of caste or age etc., He has been having a large circle of friends. All his family members and relatives have a special respect and love towards him. They feel proud of him. And, he is, too, lovely to all. On May 5th , 2011, he was wed-locked with Vanshikha Shekhawat. She is his better-half. They have good chemistry between them. Although this was an arrange marriage yet whoever observe or notice them feel that it must be a love marriage. Being a husband, he proved himself as an ideal husband. She is doing MBA from IIPM, Ahmadabad.

Career: He found his calling in the field of network-marketing. So, he avoided sitting for any placement in his college. Soon after completion of his degree in B.Tech., he founded a company named 'United Edupreneur pvt ltd. alongwith parternership of his two classmates. This company is one of the fastest flourishing companies in the field of entrepreneurship. He has a flourishing professional life as an entrepreneur, but a few years ago, he discovered the extraordinary traits or techniques to memories the things and tricks of Vedic mathematics which gave him an upturn in the field of memory and mathematics.
With constant hard work and dedication towards his profession, he has earned well-deserved name and fame in both the fields. He has discovered hundreds of techniques to memorize the mind-boggling things of the textbooks whether it is a periodic table, mathematical formulae, quotations or speeches. And, he is still unleashing new techniques for his students. He has not only touched but also transformed the lives of lakhs of people by his exuberant training through his various life changing workshops, interactive sessions, seminars and Webinars or so.

He says, "I train students to enhance their memory and calculation power for the same reason as I breathe because if I did not, I would die." This remark shows his passion or craziness towards his profession. What I want to tell you here is that unless you are crazy about anything, you will not get anything. Touching and transforming lives of lakhs of people is not as easy as it seems. It needs perpetual self-effort and training. I am not a predictor or a fortune-teller but,  just by observing his great tasks in such a young age, something make me predict that one day not only India but, the whole world will feel proud of having him here on this planet.

In the end, I would like to share one short poetical remark that is written by one of his trained students;

"With his tricks,
He does long calculations in seconds,
Life has become as easy
As feather flying in the winds,

He is a knowledge-treasure,
His memory is as sharp as razor,
Before he met, mathematics made me run;
Now it is just a fun."

He is an optimist to the core. The very presence of this man makes people believe that they are the most confident people on the planet. He has unending zeal and enthusiasm to transform the lives of the people who come in contact with him anyway. The most prominent feature of his life is-he wants to pour every drop of his knowledge and experience to the people who are struggling to live  life to their full capabilities.

Currently, he is writing a book named may be- 'Awaken the memory genius within". It is going to be published in March 2015. I have gone through manuscripts of the book and I am stunned that hitherto nobody has ever written such book on self-improvement. The unique thing or the primary difference between other books and this is that-It contains not only theoretical details but also powerful and very practical techniques which would be fully capable to transform the readers' lives exuberantl. Friends, the only defect of this book is that it has an end. I think just by reading this book individuals will be able to turn themselves into a memory giant.To be a memory Giant has been considered as something esoteric or God gifted . But he has demystified the secrets and facts of memory to the common people. Soon we hope to see this book in all the  book shops. My best wishes to him for his Debut Book- 'Awaken the memory genius within.'

This Page Has Inspired
4417
People So Far..
Any facts, figures or references stated here are made by the author & don't reflect the endorsement of iU at all times unless otherwise drafted by official staff at iU. This article was first published here on 21st February 2015.
Lokendra Singh
Lokendra Singh is a contributing writer at Inspiration Unlimited eMagazine.