The whole idea of this Sammelana was to enrich Kannada language & to encourage Kannada writers & publishers.

Me and my i3 mate, Lavanya, were lucky enough to be a part of such a huge program, We were in the performing team of the renowned composer, instrumentalist of Kannada film industry Sir. Hamsalekha. We were representing his “Hamsalekha Desi College Team” which was totally a team of 45 people. Our team was supposed to perform on the closing ceremony, that is on February 3rd, where even various other teams had come to perform & showcase the culture of Karnataka. 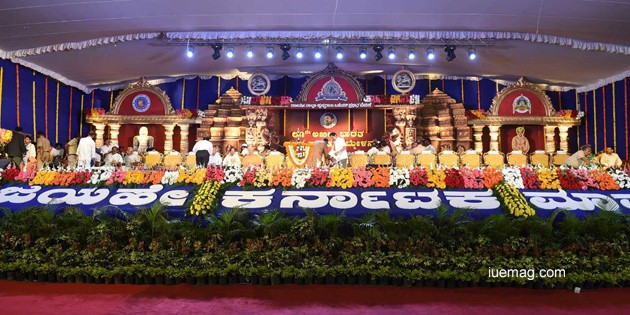 The dais was beautifully made with sculptures of Belur showcased in the backdrop. The statue of Gommateshwara was placed on the left, while the statue of Nalwadi Krishnaraja Wadayar was erected at the right side of the stage.

The best wishes from Sujit Lalwani Sir & IU Team, the live music & singing by Hamsalekha sir, his wife Latha ma’am, other prominent singers Manjunath Sir, Supriya ma’am & Badhrinath Sir, the super energetic & enthusiastic audience made us give more than 100% during our performances!

Folk styles like Dandiya, Bhangra, Kamsale, Bharathnatya etc. were performed on stage. Flute performance by Sir. Praveen Godkhindi made us all have goosebumps again & again!

As the program went on for 3 days, it was noticeable that it was flawlessly planned! From security to food arrangements for everyone, from backstage requirements to onstage arrangements, from traffic control, vehicle parking; everything was well managed.

The i3 learning of “believing in ourselves” & “under promise, over delivery” is what we implemented here.

Being in the state of Karnataka where so much of efforts are made to keep our culture & language alive, we youngsters must do our bit & support it in every way we can. We must be proud to know that such efforts are consistently being made in our state.
Get the Latest & Recommended articles in your Inbox

Subscribe!
The main lesson we personally carried out from this experience was never to forget our roots even if our branches are spread miles across!
Copyrights © 2023 Inspiration Unlimited eMagazine

This Page Has Inspired
3738
People So Far..
Any facts, figures or references stated here are made by the author & don't reflect the endorsement of iU at all times unless otherwise drafted by official staff at iU. This article was first published here on 4th February 2015.
Kalpana
Kalpana is a contributing writer at Inspiration Unlimited eMagazine
Unverified