This Page Has Inspired
1116
People So Far..
The startup technology event of the Mobile World Congress, Four Years From Now (4YFN), invites everyone to their Closing Party to join in and celebrate the end of their 3 day networking frenzy!

4YFN is a young and vibrant community that like to socialise and enjoy a good party; judging from past events, this year will be no exception!

The 4YFN Closing Party is back BIGGER and BETTER and RARING to go! 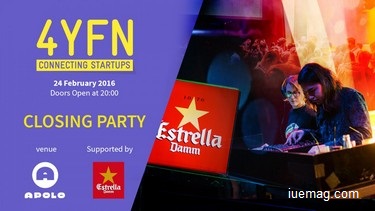 From worldwide startups, executives, corporations that influence the world of internet and mobile to investors and other industry innovators, they will all be present and under one roof, making it the last chance to close deals, this time with an added bonus of a drink in hand, whilst being in a more sociable and relaxed environment.

The party will be held on Wednesday 24 February at the Sala Apolo, one of Barcelona´s top night spots. Big name DJs such as Dj/Vj OYI, Hachazo and Nu Manu DJs will be on the decks, playing a selection of tracks to suit the crowd.

Don't miss out on what is set to be THE BEST CLOSING PARTY EVER!

ABOUT 4YFN
4 Years From Now (4YFN) run by Mobile World Capital Barcelona is the business platform for the growing community of global technology startups. The main objective is to bring together startups, investors and large companies, with the aim of strengthening the entrepreneurial ecosystem and positioning Barcelona as a leader in the digital entrepreneurship world.

Throughout the year, 4YFN organises various activities promoting entrepreneurship and helping to bridge the gap between local and international businesses. However, the programmes most important date in the calendar year is the 4YFN event held in February, driven by GSMA Mobile World Congress.
Get the Latest & Recommended articles in your Inbox

Subscribe!
Over the three years that it has been running, the event has risen to become one of the key dates in the diary for many international startups within the digital realm. The next edition will take place from 22 - 25 February 2016 in Barcelona with big industry names such as the founder of Wikipedia, the founder of Android, CEO of Hyperloop, among many others.

For more information about 4YFN or the Closing Party, write to media@4yfn.com

This Page Has Inspired
1116
People So Far..
Any facts, figures or references stated here are made by the author & don't reflect the endorsement of iU at all times unless otherwise drafted by official staff at iU. This article was first published here on 18th February 2016.