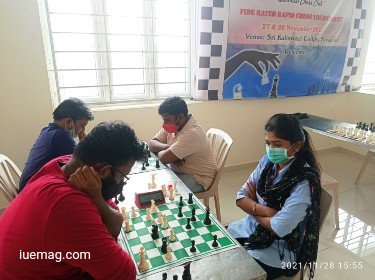 A Fide-rated Rapid Chess tournament was conducted in the Sivakasi district of Tamilnadu on November 27th & 28th, 2021. The tournament was organized by Sivakasi Chess Club and Sri Kaliswari College. This was a first rated tournament organized in Tamilnadu after an interval of 20 months due to the Covid-19 pandemic.

More than 500 players from all over South India and other states including Maharashtra participated in the tournament. International Master Mr. Harikrishnan.A.Ra bagged the Winner’s Trophy in the competition.

The tournament was flagged off amidst the heightened excitement among the players who had come to quench their Chess thirst after the unwarranted gap due to the pandemic. The tournament was inaugurated by Dr. Krishnamoorthy (Principal of Sri Kaliswari College) in the presence of Sri G Ramamoorthy, President of Sivakasi Chess Club. 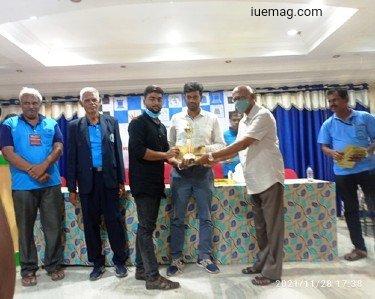 The first 3 rounds ended with the expected results but it was the fourth round that marked the turnaround in the tournament.

The results of the fourth round brought with it a couple of upsets- Mr. Ram S, the national Rapid Champion lost to Mr. S Gokulakrishna, and Mr. V Subramanian, a former State Champion & a veteran lost against Mr. G Divesh. Another surprise from the 4th round came from the win of Mr. Arvind Iyer from Maharashtra over the former junior State Champion Mr. SS Manigandan of Golden Knights Academy Madurai.

However, the biggest upset was the debacle of Mr. Maheshwara (Top-seed of the tournament) against the International Master Mr. Balasubramaniam. The game between Mr. L Sri Hari from Pondicherry and FM K Senthil Maran from Chennai ended in a draw. This resulted in five players including WFM Saranya J, IM Harikrishnan, Mr. Dusthageer, CM MV Lakshmi Narayanan, and IM Balasubramaniam shooting into the lead with six points each.

In the next round, Mr. Dusthageer won the game against WFM Saranya becoming the sole leader as other top scorers’ games either lost or drew their games.

The things got topsy-turvy in the eighth round with CM MV Lakshmi Narayanan clinching a victory against Mr. Dusthageer allowing him to join IM Harishnan (who won his game against FM Senthil Maran) for the leading position. 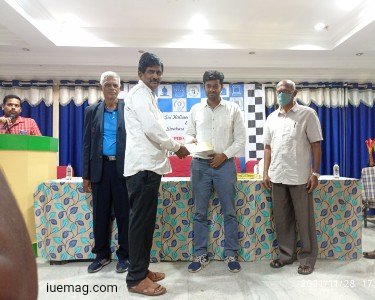 In the ninth & tenth rounds, on the top board CM MV Lakshmi Narayanan drew his game against IM Balasubramaniam, the game between IM Harikrishnan and Mr. Dusthageer had the same result. This resulted in a tie between CM MV Lakshminarayan and IM Harikrishnan for the top spot with 8 points each.

A tiebreaker was held between both of them in accordance with Buchholz Cut 1 tiebreak format. IM Harikrishnan pipped CM MV Lakshminarayan of half a point at the post to bag the championship and Rs.10000/- first prize.

At the end of the tournament, the prizes were distributed by Mr. V Vishnu Prasanna, the Chief trainer of the Hatsun Chess Academy.

As per the final ranking of the tournament, among the Top 25 players: 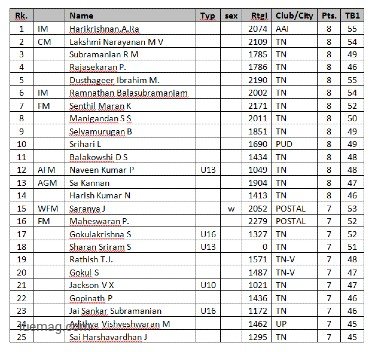 Subscribe!
*This article has been prepared in accordance with the media report by the Chief Arbiter of the tournament: Mr. R Anantharam IA
Copyrights © 2023 Inspiration Unlimited eMagazine

This Page Has Inspired
1048
People So Far..
Any facts, figures or references stated here are made by the author & don't reflect the endorsement of iU at all times unless otherwise drafted by official staff at iU. This article was first published here on 25th January 2022.