The mystery of mastery

Tweet
Views
1102
George Leonard was a writer, editor, and teacher whose passion was the exploration of human potential. In the early 1990s, he published Mastery - The Keys to Success and Long-Term Fulfillment. It may help to point out that he was also a 5th degree black belt in Aikido, which like most ancient martial arts, sprung from a foundation of religion, spirituality, and mysticism.

Over the past 10 years, I have read this book at least four times, and it has definitely influenced the way I view life, success, business, and now, physical training. But when it comes to defining what mastery is, I cannot quite get there. I can tell you that it is more than any dictionary would lead you to believe. Leonard's concept of mastery is much more than success, or excellence, or dominance, or skill, or expertise, though it certainly contains all of that.

Pick your sport or your passion. It can be a javelin or saxophone; a barbell or a sauce pan; a volleyball court or a theatrical stage; a kettle bell or a boardroom. I cannot tell you what mastery is, but I think I can show you what it looks like.

As far as the sport of golf is concerned, I am neither a player nor a fan, but I have to admit being intrigued and amazed by the early success of Tiger Woods, who not long after turning pro and winning the Masters was generally considered the best golfer on the planet and an odds-on favorite to become the winning golfer in the history of the game.

So how do you explain it when a player who was often described as having the perfect swing, decides to dispense with that swing and build a new swing from scratch? In fact, some experts say that by now, he has rebuilt his swing at least four times. I think it is safe to say that most athletes, whether pros or duffers, believe that, when it comes to technique, tampering with success is a fast track to failure and frustration - especially when that technique is already winning tournament after tournament.

Many basketball fans consider the 1980s to be the golden era of professional basketball, and they credit Larry Bird and Magic Johnson as being the players most responsible for lifting the NBA out of the doldrums and exciting a new generation of fans with their unique abilities to lead their teams, the Boston Celtics and the Los Angeles Lakers, to victory.

I was not a serious basketball fan during that era, but living in Celtics Land, it was impossible not to be aware of Larry Bird's almost commonplace heroics which made him a 12-time all-star, earned him 3 MVP awards, and helped lead the Celtics to 3 world championship titles. But my outstanding memory of Larry Bird was seeing his ritual of being alone on the court before a game, shooting jump shot after jump shot, before any other player on either team even made an appearance.

What was he going to accomplish with all of that practice? Wasn't that jump shot already so perfectly embedded in his muscle memory that it could never be lost even if for some strange reason he wanted to lose it? 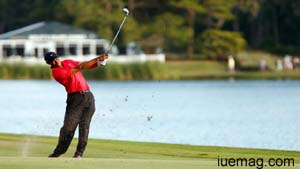 And that brings me back to Tiger Woods and my outstanding memory of him. It was a Nike commercial, where he is repeatedly and flawlessly bouncing a golf ball off the head of a golf club, as though he was hitting a tennis ball off a tennis racket. He softly hits the ball up in the air in front of his body, then moves the club behind his back, and then through his legs. The ball never stops until he makes it land and rest, incredibly, on the head of the club - with seemingly unnatural control.

We live in a culture that preaches measurable accomplishment. Competitors train and hone their skills with their eyes on the award, the trophy, the championship, the MVP. We, the more ordinary humans, seek our own individual milestones: losing 25 pounds, adding 50 pounds to our best deadlift, running 26 miles in under 4 hours, or seeing our first poem or short story published in a magazine. We set our sights on goals that keep us working and that keep us engaged in our training.

But, are we missing something that would bring us greater success and greater happiness? To me, George Leonard's view of mastery is still somewhat of a mystery, but it is a mystery worth solving, so I am going to examine some clues taken right from the master's lips:

"Almost without exception, those we know as masters are dedicated to the fundamentals of their calling. They are zealots of practice, connoisseurs of the small incremental step."

Tiger Woods and Larry Bird stand-out as zealots of practice, but what exactly does practice accomplish when conducted by individuals who are already at the very pinnacle of their sport? I think the answer lies in the phrase: "small incremental step."

How many incremental steps are there to shooting a jump shot? If you or I might break it down to 5 steps or 7 steps, is it likely that Larry Bird broke his down to 10 or 12 steps, examining and perfecting micro-movements that are invisible to most observers? And, what about Tigerwoods junking his seemingly perfect swing? Could it be that he saw microscopic components that did not mesh as perfectly as he wished they did and as perfectly as spectators and critics believed they did?

Clue #2: The Journey and the Plateau

"To take the master's journey, you have to practice diligently, striving to hone your skills, to attain new levels of competence. But while doing so - and this is the inexorable fact of the journey - you will have to be willing to spend most of your time on a plateau, to keep practicing even when you seem to be getting nowhere."

Your goal is to throw a 95 mile per hour fastball - literally or metaphorically. You started with an 88 mph fastball. Your version of this goal could apply to any other sport, or fitness challenge, or life mission.

So, what do you do? It is here, on the plateau that many give up. But if you decide that you are on the road to mastery, you will have no reason to give up. You understand that you must embrace the journey. You realize that true progress comes in small incremental steps, and that those steps may be so small that you cannot see them.
Clue #3: Loving the Plateau

When your fastball went from 88 to 90, it seemed to happen all at once, in a great spurt of progress. But, in reality your skill improved before you saw the measurable result. Now, on the plateau, while you are focused on every micro-component of your arm motion, you are continuing to improve, even though you have not seen the measurable proof of that improvement.

So, when that next spurt does happen and the radar gun tells you that you are now throwing at 93 mph, you, of course, enjoy those fruits, but your road to mastery demands that you continue to practice and hone your skill while you look forward to your next plateau.

Clue #4: The Journey is Endless

"Ultimately, the master and the master's journey are one. And if the traveler is fortunate - that is, if the path is complex and profound enough - the destination is two miles farther away for every mile he or she travels."

Are we now getting closer to solving the mystery, or are we coming to terms with the truth that the mystery of mastery is not quite solvable? The destination never stands still. If we are fortunate enough to find our 95 miles per hour fastball, we will either set our sights on 96 or we will find the components that need to be fixed or replaced to have the most efficient and consistent 95 that we can possibly attain. For Tiger Woods, the perfect golf swing is one that he has not yet discovered. For Larry Bird, the perfect jump shot was farther down the path. For you, the perfect deadlift, tennis serve, kettle bell swing, 10K road race, chess match, or whatever may be your own personal fastball just might be a lot more than what you see in the mirror, on the radar gun, or on the stat sheet. It might lie deep in your soul. It might begin with the simple joy that comes with your deep connection to the golf club, or the basketball, the barbell - your fingers on the seams of the baseball, or on the strings of the guitar, or in the garden soil.

Our culture drums into our brains that we must have goals. Trainers and coaches tell us that those goals must be measurable, and George Leonard agrees, but he also tells us:

"Keep your eyes on the path. And when you reach the top of the mountain, as the Zen saying goes, keep on climbing." A true master never stops being a learner. And a real detective never stops searching until the mystery has been solved.
Copyrights © 2021 Inspiration Unlimited eMagazine

Any facts, figures or references stated here are made by the author & don't reflect the endorsement of iU at all times unless otherwise drafted by official staff at iU. This article was first published here on 27th June 2014.
Bruce Coltin
Bruce Coltin is a contributing writer at Inspiration Unlimited eMagazine
Unverified
Most Loved On iU
Have something to share? Drop us a line below!
People who loved this also loved