“You can’t put a limit on anything. The more you dream, the farther you get”, Michael Phelps, the most decorated Olympian of all time, had said. In the following words, unfurls the story of a swimmer, who has swam her way to shores of glory and has made quite a name for herself. She has in her collection, about 97 gold medals, 90 silver medals and 36 bronze medals, until now, and the numbers are only to increase further.
This Page Has Inspired
1179
People So Far.. 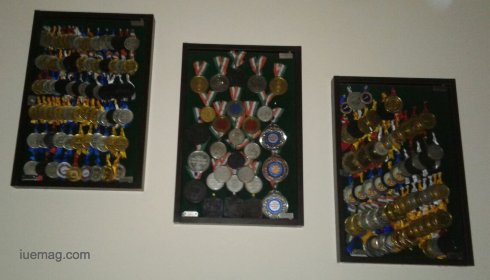 Three shelves replete with medals welcome me to the house of Divya Guruswamy. There also is a cabinet carrying pictures of her in action, as a backdrop to the many trophies adorning the stand. As any other kid in India, Divya too first took up swimming during the vacations of summer; it was also due to the mere recommendation of the doctors for her migraine. She is a breaststroker, which she says happened, thanks to the observation of one of her coaches, early into the sport, and she has stuck to the same ever since.

Divya has also managed her academics extremely well. She was also one of the toppers for her state, Karnataka in her 12th board exams. “There are 24 hours for everyone. It is upto each one as to how they manage their time. If one has passion immensely, it is very easy to do well”, says Divya.

Her first stint at a competitive level happened with a bit of incredulity when she was to compete with a higher age group, due to some misunderstanding. Finishing at a decent place in the same made her realise her potential in the sport. Breaststroke, being one of the toughest strokes in swimming, became her forte. She also has broken long standing state level and national level 50m breaststroke records in her career yet.

From waking up early in the morning to foregoing the “fun” evening time after school, swimming is a sport that demands much commitment. It also requires sufficient protein intakes and supplements and gym sessions. Being a pure vegetarian, Divya, has had her constraints, but has understood them well and abided by them.

Having jumped into the pool first when in her 1st grade, she attended her first state level tourney during her 5th grade. Having come at the 2nd place, she soon was sent to compete in the national level tournament. She made a drastic improvement from edging with fractions of a second in the state meets to a comfortable 4-5 seconds head in the nationals. She also attended the national meets for consecutive years from 2006 to 2013. Currently, Divya swims for her college, and is also the captain for the team. Pursuing her 4th year in engineering at BMS College of Engineering, she has won many laurels at the university meets, for her college. 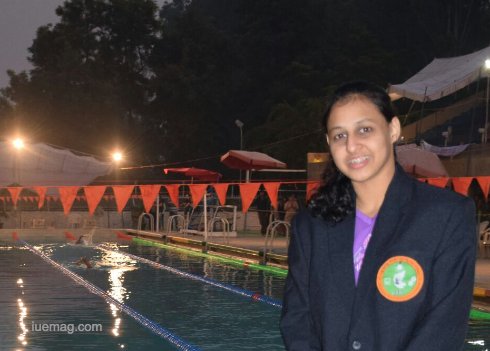 Divya also credits much to her parents, Guruswamy and Deepa Guruswamy, and her coach, Jayarajan. The sense of pride oozes out from her mother as I speak to her. “She has always been a child who has managed her academics as well as swimming really well. Of course, at the outset, she needed much pushing into the sport, but now she has made us really proud”, says Deepa with immense satisfaction.

Having broken a record first at the age of about 10 years, Divya trained hard at the pool. Her day started with getting up early and heading to the pool at 5:30 in the morning. She was also required at go back to the pool, after school at around 5 in the evening, which would many a times even stretch upto 9 in the night. This girl with a never-give-up attitude had this to say when I asked her about the factor in her she thinks has taken her to glory- “I am a very determined person. I knew that swimming and academics had to go in sync, and I strived to keep it that way. I also know my limitations and I work to push beyond them”. 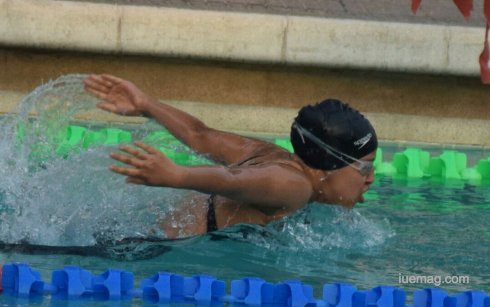 Fitness plays a pivotal role in the sport. Understanding the scenarios during the competition and applying efficient strategies within seconds demand lots of mental fitness. Events can change even in the last few seconds, due to one’s mental approach. At the same time, it must be known that mental fitness alone cannot help you win. Equal efforts have to be put in to train and make you fit physically. Quoting her coach’s most used words, “No pain, no gain”; she also spoke a few words on how the sport has helped her perform better in her academics. “Swimming is my refreshment; it is my cool breeze; it drives me to work harder”, Divya says about the sport.

Speaking with one who has won so much, I had my eyebrows raised when Divya declared that she still hasn’t achieved anything and has a long way to go. “I only have very short term goals set. The backing and belief of my parents and coach in me helps me a lot. I always believe that I still have a very long way to go”.
Get the Latest & Recommended articles in your Inbox

Subscribe!
As Dennis Redman said, “This life is like a swimming pool. You dive into the water, but can’t see how deep it is”. Divya’s is one story with immense grit and time-management that can tell the crowd that it isn’t impossible to carry and balance more than just one plate in your hand.
Copyrights © 2023 Inspiration Unlimited eMagazine

This Page Has Inspired
1179
People So Far..
Any facts, figures or references stated here are made by the author & don't reflect the endorsement of iU at all times unless otherwise drafted by official staff at iU. This article was first published here on 24th July 2017.
Sathwik R
One with a zeal to do good always.