I had seen a quote on a biking club's banner - "Our Chains Set Us Free". All I could think of was the sense of freedom and liberty oozes in the men on the two-wheel machines; I dare say, in many women too.
This Page Has Inspired
1245
People So Far..
Iconic scenes in movies are scripted around a bike ride; a picture of a man on a bike on a highway is paralleled to solace of mind; we seek abundance of tranquillity in the rides, but, somewhere, we are blinded off to the beauty that trails behind.

Usually as part of a club, the bikers set out on journeys. When they go on the rides, it is not only for their pleasure, but in many cases, for a cause too. ‘19”’ (read 19 inches) is one such biking club, that have held many such a foray.

Speaking to one of the members of 19”, Nithin Nachappa, the first question that hits the mind is on the thought behind the christening. “That’s the size of the tyres of our bikes”, quips Nithin. 19” is a club of about 8 friends, with a maddening craze for bikes. 19” happened when he once was sitting along with his friends for drinks. Having read many articles in the newspapers about biking excursions, and also since all of them possessed bikes, thoughts of them coming together blossomed. They have gone on many expeditions on their two-wheelers, the recent one being Kolkata to Bhutan. He also has been part of the drive covering 2100 kms along the South India Coastal Line.

Nithin, who has had the craze for bikes since young age, has also been part of the Indian National Rally Championship. Staying in a hostel, he developed on his craze to witness drag races, so much that he used to skip proper meals in order to save money. He learnt a lot about bikes and cars through them. “The smell of the burnt rubber is tripping”, he says grinning wide. 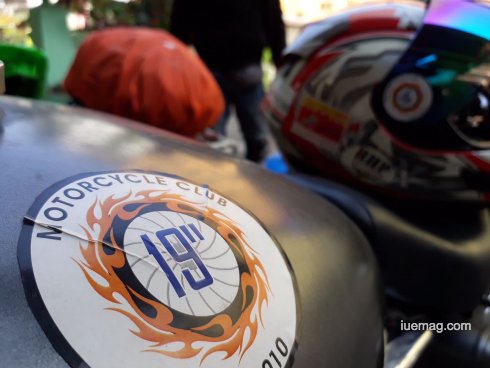 Also a state-level hockey player, Nithin drove from Kolkata in India, to Bhutan, covering about 1300 kilometres with some of the members of 19”. Traversing through picturesque places like Darjeeling, Siliguri, Kalimpong and Phuentsholing, Nithin says that this trip was a surreal one. He was to ride on challenging terrains and temperatures as low as -6* C. There are people who dream of owning a bike, and then there are others who cross international borders on their bikes.

Riding through paths where visibility was as low as 10m, it needed immense concentration to traverse through. A slight lapse and it could prove very costly. “Being a hockey player, it helped me majorly. Riding a bike definitely requires immense fitness, not only physically, but mentally too. There are terrains with flowing water, snow, mushy lands, etc. One cannot afford to take his eyes off the roads. Riding over 13-15 days, one definitely will feel lots of fatigue. But if that takes over our passion for the drive, the efforts just go down the drains”, he adds. “Although minor setbacks regarding permits cropped up, the sheer sight of the snow clad mountains upon reaching the destination gave us goosebumps”.

Nithin has also rode along the Southern Coastal Line of India- a ride that was part of the ‘green’ cause. Funded by Cognizant, the 19” inches members went to schools across the coastal areas and spoke about the importance of saving greenery. They also planted saplings at many places.

Their eyes are set on a ride to Thailand. Nithin says, “Of course there are people who have done it on their superbikes. But we would love to be the first ones on the Bullet”.

Having been in the rallying circuit too, Nithin has a piece of advice that he wishes youngsters could understand and appreciate-“Speed is frenzy for many young bloods. It must be understood by them that everything has its own right place. If they believe that they got the talent, they can showcase it or practice in the tracks prepared for the sole purpose”. There also exist rules laid down in the club. There is zero compromise on safety. The bikes must be completely equipped with crash guards, mirrors, functioning headlamps and tail lamps, etc. The rider must also be dressed in a complete gear.

“Physical fitness is also an important aspect”, says Nithin. He added that the long hours holding the handle on bumpy roads would take a toll on the shoulders and the spine. Fitness can help overcome them. This fitness can come from gymming and running. It also must be remembered that breaks, at suitable and sensible intervals must be taken. “Fitness also helps get control over the vehicle; which is the most important. Having excellent control makes manoeuvre very easy”.

Nithin also is planning to create a blog and share his experiences through words. He believes that, there isn’t a creditable write-up yet on the ‘Happiest Country’- Bhutan, and wants to write one.

The story of 19” and Nithin is surely one motivation for all the bike lovers out there. When done with utmost caution and preparation, it definitely is a drug in itself, is bike riding. As they all would agree-“Nothing compares to the simple pleasure of a bike ride”.
Get the Latest & Recommended articles in your Inbox

This Page Has Inspired
1245
People So Far..
Any facts, figures or references stated here are made by the author & don't reflect the endorsement of iU at all times unless otherwise drafted by official staff at iU. This article was first published here on 11th July 2017.
Sathwik R
One with a zeal to do good always.