From Meatless Monday campaigns to veggie burgers at fast food joints, the popularity of vegetarianism is increasing in the U.S.A.. Today there are more than 19 different varieties of vegetarianism in existence, and more than 7 million people follow some form of vegetarian eating in this country alone. Whether your motivations are inspired by ethical, religious, or health concerns, you can "do a body good" by restricting your intake of meat and meat products. Read on for some compelling reasons why this is so.
This Page Has Inspired
1337
People So Far..

Why delete the meat? Chew on these reasons

According to a recent position paper of the Academy of Nutrition and Dietetics (AND), not only is a vegetarian diet nutritionally adequate, but it is also associated with a reduced risk of chronic diseases and cancers, and with an increase in longevity. Specifically, says the AND, a well-balanced vegetarian diet is healthier than the standard American diet (SAD). Features of a vegetarian diet that heighten health benefits include lower intakes of saturated fat and cholesterol, coupled with higher intakes of fruits, vegetables, whole grains, nuts, soy products, fiber, and phytochemicals. 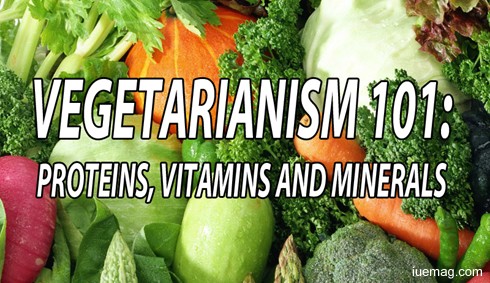 How can you be assured that your style of vegetarian eating is healthy? Actually, it’s quite simple. I offer the same advice to you that I give to my vegetarian and carnivorous clients: It’s all about balance.

In general, build your plate around low-fat, high-fiber, nutrient-rich choices such as beans, lentils, quinoa, barley, and non-GMO (genetically modified organism) soybeans. At least half the plate should be filled with an abundance of fruits and vegetables. Pick a “rainbow” of fruit and vegetable colors. We call this “cooking by color.” Specifically, the deep red, orange, green, and purple fruits and vegetables are rich in anthocyanins and carotenoids, which boost immunity and prevent a range of illnesses. One popular adaptation is the USDA’s Chose My Plate campaign, parts of which have been modified with vegetarians in mind.

How to get enough protein

One question I often encounter in my practice is, How can I get enough protein when following a vegetarian diet? Protein is an important nutrient that is used by the body for growth and maintenance.

Luckily for those of us who don’t eat animal products, nearly all vegetables, beans, grains, nuts, and seeds contain some protein. Sources of protein for vegetarians and vegans include beans, nuts, nut butters, peas, and soy products (tofu, tempeh, veggie burgers, and soymilk).

How much is enough?

The U.S. Recommended Daily Allowance for protein is about 0.4 grams per pound of body weight. This means that a typical 180-pound vegetarian man needs about 72 grams (g) of protein a day, whereas a 140-pound, vegetarian woman must consume about 56 g a day.

Use this sample list of foods that contain plant-based proteins to help you assemble a multiplicity of protein-packed vegetarian meals.

For lacto-ovo vegetarians: the milks and the eggs

Soy- and dairy-milk products, as well as eggs, are good protein sources too. A cup of low-fat soy or dairy milk provides 7 to 8 g of protein and a large egg provides 7 g of protein.

Must we combine the “incomplete” amino acids found in plant proteins?

At one time it was thought that the vegetable proteins found in seeds, beans, and grains, in order to be efficiently used by the body, had to be artfully combined and eaten together during the same meal so their protein patterns would more closely match those of animal proteins. We now know that we don’t need to make vegetable proteins mimic the composition of animal proteins and that individual plant foods contain all the amino acids required by humans. We’ve further learned, as well, that the liver keeps a reserve of these amino acids and combines them as our bodies need them, thus saving us from the nuisance of combining different vegetable protein sources in the same meal.

Iron carries the oxygen in the blood. A deficiency of iron can cause something called microcytic hypochromic anemia, which is characterized by small, pale, red blood cells, and when you become anemic, you tend to tire easily and have poor exercise endurance. In the foods we eat, iron is available in two forms: the heme sources, which include meats, fish, and poultry; and the non-heme sources such as legumes, vegetables, dried fruit, and seeds.

Because the iron from non-heme sources is not as efficiently absorbed and used as that from heme sources, the Institutes of Medicine has increased its recommended levels of iron for vegetarians.

Calcium plays an essential role is some crucial bodily functions: from muscle contractions, to blood clotting, to nerve conduction, to bone strength and integrity. Adults under the age of 51 need about 1,000 mg of calcium each day. Those over 51 need 1,200 mg a day. Sources of calcium for vegetarians and vegans include calcium-fortified soymilk, calcium-fortified breakfast cereals and orange juice, tofu made with calcium sulfate, and certain dark-green leafy vegetables such as collard greens, spinach, turnip greens, bok choy, and mustard greens. One caution: people with low vitamin D levels, either from low sunlight exposure or from limited diets, can have poor calcium absorption.

Zinc is necessary for maintaining our senses of smell and taste, supporting healthy skin and hair, and arming the body for resistance to infection. Sources of zinc for vegetarians and vegans include many types of beans (such as white beans, kidney beans, and chickpeas), zinc-fortified breakfast cereals, wheat germ, and pumpkin seeds. According to the National Institutes of Health, some adult vegetarians need 50 percent more zinc than the recommended 40 mg for people over 18. Why? Because the zinc found in plant foods has a lower absorption level. To fully extract more of the available zinc, soak your beans, lentils, peas, and nuts overnight and use the bean-broth in cooking. Milk products are a zinc source for lacto-vegetarians.

Vitamin B12 is essential for normal muscle function and the formation of red blood cells. Unsupplemented vegetarian diets can result in a type of anemia called macrocytic hypochromic anemia, whereby immature, large, pale red blood cells flood the bloodstream. B12 is found in animal products and some fortified foods. Healthy people need about 2.4 micrograms (mcg) of B12 each day. Vegetarian sources of vitamin B12 include milk products, eggs, nutritional yeast (contained in food pastes such as Vegemite and Marmite bread spreads that are made from yeast extract), and foods that have been fortified with vitamin B12, such as some brands of breakfast cereals, soymilk, and veggie burgers. Another way to get enough B12 is to take a daily multivitamin that provides at least 10 mg of B12.
Get the Latest & Recommended articles in your Inbox

The current recommended intake for vitamin D is 600 International Units (IUs) for adults up to age 70 years and 800 IUs for adults 71 and older. Since food sources of vitamin D are quite limited, dairy products are supplemented with this crucial compound. This means that vegans, as well as those vegetarians who don’t eat dairy, must take their own extra vitamin D, in a form of the substance called D2, which is made from yeast. (Dairy eaters take a form of the vitamin called D3.) Because D2 isn't used by the body as effectively as other forms of vitamin D, many experts suggest that vegetarians who rely on vitamin D2 consume 1.7 times the Reference Daily Allowance, which is the level necessary to meet the needs of the majority of healthy individuals. This means that the intake for vegetarians up to 70 years of age should be 1,020 IU (25.5 mcg) of D2 daily and, after age 70, it should be 1,360 IU (34 mcg) of D2 every day.
Copyrights © 2023 Inspiration Unlimited eMagazine

This Page Has Inspired
1337
People So Far..
Any facts, figures or references stated here are made by the author & don't reflect the endorsement of iU at all times unless otherwise drafted by official staff at iU. This article was first published here on 21st March 2017.
Isabelle Clover
Isabelle Clover is a certified nutrition expert.
Unverified