15 March 2017, New Delhi India: The most successful 4th edition of India m2m + iot Forum was held on 6 – 7 March 2017 at India Habitat Centre, New Delhi, India.
This Page Has Inspired
1063
People So Far..
The forum discussed, deliberated and concluded on key themes and topics such as:

- Capitalizing Connected World
- The ABC’s of m2m + iot - Policies, Regulations and Standards – National and Global Scenario
- Industry Round Table on m2m + iot Service Delivery Modelling – How and Why?
- TOWARDS SMARTER INDIA – from Vision to Reality
- Role of m2m + iot in Making Sustainable Smart Cities in India
- m2m and iot Use Cases, Case Studies, Pilots and Projects. 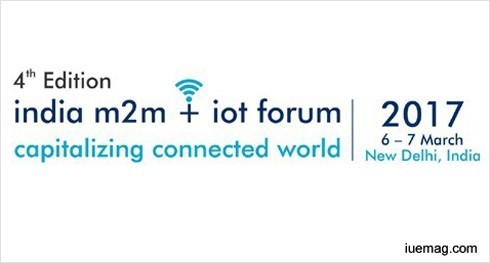 The forum was a packed house with industry experts who shared their visions and views at much greater details on the program topics. Ms Swati Rangachari, Chief of Corporate Affairs, Sterlite Technologies Limited stated, “For the technology and digital revolution, the network is foundation. Wireline and wireless synergy in important. We need to ensure the network is scalable and robust”, as she addressed the august gathering during the inaugural session.

Dr Rishi Mohan Bhatnagar, President, Aeris Communications, India mentioned, “Big manufacturers like GE (Engines) and Philips (Medical Equipment) are switching from product sellers to service providers. Remote monitoring and control is and will be an integral part of such delivery models”.

The plenary panel discussed and deliberated on ‘The ABC’s of m2m + iot - Policies, Regulations and Standards – National and Global Scenario’ which gathered a huge interest from the stakeholders of the eco-system. The panelists on the panel were from the most relevant stakeholders such as;

The discussion points and deliberations from the panel was reported and will be delivered to the decision and policy makers of the Government of India.

India m2m + iot Forum 2017 together with the most preeminent Department Of Telecommunications (DOT), Ministry Of Communications, Government Of India, organized a special industry round table on ‘m2m and iot Service Delivery Modeling – How and Why?’ to deliberate and establish the m2m and iot Service Delivery Modeling. This session was powered by the prestigious Cellular Operators Association of India (COAI) and moderated by none other that the Director General, Mr Rajan S Mathews. The round table witnessed the industry representation by Sterlite Technologies, Vodafone Business Services, TATA Teleservices and Centre for Development of Telematics.

Mr Mathews during his address to Honourable Secretary, Mr JS Deepak, Department of Telecommunications, Ministry of Communications at the Gala Evening highlighted, “We need to allow all kinds of player to co-exist, some will provide complete end-to-end IoT solutions, others will include application providers, network operators, and others.” He further added, “Rather than shifting the ecosystem through strict delivery models, we need to standardize the common service layer. This will allow the innovation to evolve naturally until the best solution emerges.”

In its constant endeavour to encourage the startups in the ICT (m2m + iot) domain, India m2m + iot Forum 2017 joined hands with Telecom Centre of Excellence, India (TCOE, India) to organize the ‘TEN Square Business Pitch Competition’. Jointly organized by TCOE India (Telecom Centres of Excellence, India), this unique competition provided an unprecedented platform for startups to showcase their business ideas and innovations, explore business and partnership opportunities, interact with business experts, corporates and mentors, investors and venture capitalists, including top industry associations and government organizations and department. The competition was judged by the esteemed jury members involving incubation centres and venture capitalists and the panel members of the TEN Square Program. Mr JS Deepak, Secretary, Department of Telecommunications, Ministry Of Communications rewarded the winners of the competition during the gala evening.

The winners of the competition were as follows:

3rd: Smart 24x7 Response – showcased on mobile platform for the safety & security to the citizens.

India m2m + iot Forum 2017 hosted the ‘3rd India Smart Cities Forum’ on Day 2. The theme for this year was ‘Towards Smarter India – from Vision to Reality’ which brought about key insights from both the policy makers as well as the industry players. Mr Sajeesh Kumar, Director, Smart Cities, Ministry of Urban Development suggested, “We need to have benchmarks to compare progress of smart cities. We should not have one size fit all hence, we ask cities to make their own vision and their context and work on that for the execution of smart city projects in India,” during the inaugural session.

Detailed and live videos from the forum proceedings can be viewed at https://www.m2m2iotforum.com/2017/video-gallery/.

India m2m + iot Forum extends it’s invitation to one and all from the machine-to-machine (m2m) and internet of things (iot) eco-system to join the much awaited 5th edition in 2018, while the forum prepare for a curtain raiser in May 2017.

Telecom Centres of Excellence, set up in Public Private Partnership (PPP) mode, are an example of the Government, the Academia and the Industry working together for the sustained growth and progress of the country in the Telecom sector.

The iUeMagazine team was delighted to work with India m2m + iot Forum 2017 2017 as Online Media Partners & to have brought Unlimited Inspiration for all readers from the proceedings of this event.
Copyrights © 2023 Inspiration Unlimited eMagazine

This Page Has Inspired
1063
People So Far..
Any facts, figures or references stated here are made by the author & don't reflect the endorsement of iU at all times unless otherwise drafted by official staff at iU. This article was first published here on 21st March 2017.