This Page Has Inspired
1417
People So Far..
Introduction

Who would have thought that modern manufacturing could be done without a factory? Since the Industrial Revolution, manufacturing has been synonymous with factories, machine tools, production lines and economies of scale. So, people started to think about manufacturing without tooling, assembly lines or supply chains. However, this is exactly what is happening as 3D printing reaches individuals, small businesses and corporate departments.

To anyone who hasn't seen it demonstrated, 3-D printing sounds futuristic-like the meals that materialized in the Jetsons' oven at the touch of a keypad. But the technology is quite straightforward: It is a small evolutionary step from spraying toner on paper to putting down layers of something more substantial (such as plastic resin or molten metal) until the layers add up to an object.

Today, you can make parts, appliances and tools in a wide variety of materials right from your home or workplace. Using a computer, simply create, modify or download a digital 3D model of an object. Click "print" just as you would do for a document, & watch your physical 3D object take shape. No longer the stuff of science fiction, 3D printing is a new reality. 3D printing technology is really a boon & can be declared as an art of remaking things. 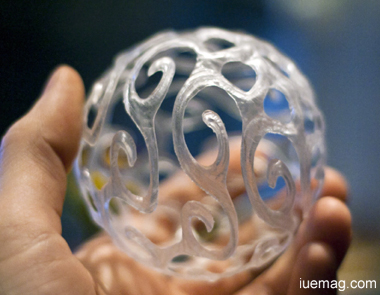 What is this 3D printing Technology?

3D Printing or Additive manufacturing is a process of manufacturing 3 dimensional solid object of virtually any shape from the digital model. It is achieved by using an additive process, where successive layers of materials are laid down in different shapes.

The first published account of a printed solid model was made by Hideo Kodama of Nagoya Municipal Industrial Research Institute in 1982. The first working 3D printer was created in 1984 by Charles W Hull of 3D Systems Corp.

Hull published a number of patents on the concept of 3D printing, many of which are used in today's additive manufacturing processes. Of course, 3D printing in the early days was very expensive and not feasible for the general market. As we moved into the 21st century, however, costs drastically dropped, allowing 3D printers to find their way to a more affordable market.

The difference between traditional manufacturing and 3D printing is how the objects are formed. Traditional manufacturing processes generally use a subtractive approach that includes a combination of grinding, forging, bending, moulding, cutting, welding, gluing and assembling. Take the production of a seemingly simple object such as an adjustable wrench. Production involves forging components, grinding, milling and assembling. Some of the raw material is wasted along the way, and vast quantities of energy are expended in heating and reheating the metal. Specialist tools and machines, optimized to produce wrenches of one size and nothing else, are required. Almost all, everyday objects are created in a similar (but usually even more complex) manner.

How is it done?

3D Printing involves 3 basic principles:
Modelling: It involves creating Blueprints using CAD tools or Animation Modelling Software by scanning them 360 degree. These images are sliced into digital Cross-sections for the machine to successively use as guideline for printing.

Printing: The machine reads the design and lays down successive layer of required material to build the model from a series of cross sections. These layers, which correspond to the virtual cross sections from the CAD model, are joined together or automatically fused to create the final shape.

Finishing: Though the printer-produced resolution is sufficient for many applications, printing a slightly oversized version of the desired object in standard resolution, and then removing material with higher-resolution subtractive process can achieve higher-resolution objects.

Since becoming popular, 3D printing has worked its way into many markets. The technology is now used in prototyping and distributed manufacturing with applications in architecture, construction, industrial design, automotive design, aerospace, military, engineering, etc. It has also become popular in areas such as dental and medical technology, fashion, footwear, jewellery, eyewear, and more. Interestingly, even food may one day be printed, which may help feed the ballooning population.

As the technology advances, more and more practical uses are expected to come about as a result of additive manufacturing. With the addition of 3D digitizers, 3D sensors and 3D scanners, the possibilities are almost endless. Recently, NASA has been testing rocket parts built by 3D printing and may even use the technology to build habitats in space and on other worlds. 3D printing technology is being used in medical fields to develop artificial ears and also working artificial kidney!

A Right Platform for Innovation

3D printing is a digital technology, not just a manufacturing technology. With its open and democratic properties, 3D printing sets the stage for innovation.

Given the deep roots of traditional manufacturing and the challenges the nascent 3D printing movement poses, will 3D printing really disrupt the manufacturing industry? In short: yes. As The Economist reported, we may be on the verge of the third Industrial Revolution, and like all revolutions, the impacts run wide and deep.

The question for manufacturers anywhere in the supply chain is how they will need to change - not disappear but adapt to 3D printing.

In the short term, 3D printing will not go head-to-head with traditional large-scale manufacturing but will increasingly be used for prototyping, tooling of traditionally manufactured items, and the direct manufacture of highly custom or technically complex low-volume items.

For large-scale corporations that design and build things, 3D printing is an opportunity for IT to forge new relationships with manufacturing and with those who need to visualize designs, like scientists and engineers.

As each and every technology has advantages, they do have their own disadvantages.


With the advantages of 3D printing, mankind may be entering a new post-industrial manufacturing age where products are significantly cheaper and built quicker than ever before. However, the disadvantages of 3D printing need to be known. They should see to it that the technology helps the entire population and not only a small sector of the society.
Get the Latest & Recommended articles in your Inbox

This Page Has Inspired
1417
People So Far..
Any facts, figures or references stated here are made by the author & don't reflect the endorsement of iU at all times unless otherwise drafted by official staff at iU. This article was first published here on 14th March 2014.
Subhash K C
Subhash K C is a contributing writer at Inspiration Unlimited eMagazine.