This Page Has Inspired
1185
People So Far..
On a day just like some other, the sun rose and brightened the biggest slum of Asia in Mumbai known as Dharavi. This day was going to change thousands of lives, as a Hero shined like a lotus through the swamps. He shines as a phenomenal personality today; and the name is - Ashok Shankar Rathod.  After 4 years of his dedication, immense efforts and hard-work, he founded and established O.S.C.A.R (Organization for Social Change Awareness and Responsibility). More about this REAL HERO can be read on www.iuemag.com/november2012/ashok-rathod-a-real-hero.php

Today with the efforts of all these years, O.S.C.A.R is touching heights. It so happens that when a real star is born he wishes to make others shine alike. With the coaching and mentoring from Ashok Rathod, the students at O.S.C.A.R are so skilled at Football that on the 6th year of arrival of two coaches from Queen’s Park Ranger, a professional Football Club at England, to India, the scene was totally different.

Each year more than 6000 students from around 300 schools participate in the Mumbai Soccer Challenge organised at Mumbai. Under this competition, there is inclusion of two coaches from the Queen’s Park Ranger England which selects around 45 children every year who are then imparted a training for 3 days and the children are observed for their football skills and talents like body movement, footwork, tricks, fitness, etc. At the end of the 3 days training, the 3 best players are selected for playing football challenges at London. In 2014, Aman Gayakwad of O.S.C.A.R was selected by these coaches and his fortune opened doors to London. 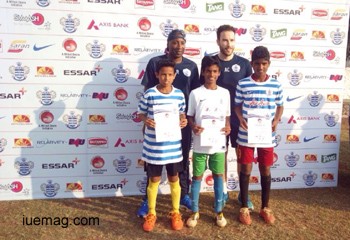 Ashok Shankar, who himself has travelled many countries promoting football and his story, wanted this story to be shown to the world in reality by his students at O.S.C.A.R getting a chance to go abroad and show their talent. After facing many challenges and putting selfless efforts and attracting this dream of his, he feels extremely proud today and says – “In 2015, among the 6000+ children from the field of football, and the chosen 45, the final three that came to limelight for the football championship at London BELONG TO O.S.C.A.R” with a shine in his eyes.

The three champions that now hail to become stars of football are Sunil Mohan Rathod (14), Sitaram Nehru Rathod (13) and Sunil Tulsiram Rathod (14). The parents of these children aren’t educated but with the help of O.S.C.A.R, these three stars are now studying at school. Sitaram has been elected as the captain of the football team at his school. Sunil Mohan Rathod and Sunil Tulsiram Rathod have made their school very proud by winning a good number of tournaments and brought the cups to the winning history of the school.
Get the Latest & Recommended articles in your Inbox

Subscribe!
“When any talent is rightly directed, WINNERS are Born!!” this is proved by Mr Ashok Shankar Rathod and the team of O.S.C.A.R at Mumbai.
Copyrights © 2023 Inspiration Unlimited eMagazine

This Page Has Inspired
1185
People So Far..
Any facts, figures or references stated here are made by the author & don't reflect the endorsement of iU at all times unless otherwise drafted by official staff at iU. This article was first published here on 13th March 2015.
IJ Anita Tejwani
IJ Anita Tejwani is a contributing writer at Inspiration Unlimited eMagazine.