It does not matter if one cannot create a change in a massive way, but it is important to be the change in the smallest way possible. The change that begins with us, has possibilities to create revolutions. Read the story of how a small act of this young lady has today led to inspiring thousands of minds.
This Page Has Inspired
1454
People So Far..
Meet Aishwarya Hebbar, 20, a student environmentalist from Bangalore, India, who has moved ahead of many other youngsters of her age, to help protect the harm to the environment and at the same time, has evolved with a unique concept to help underprivileged students. 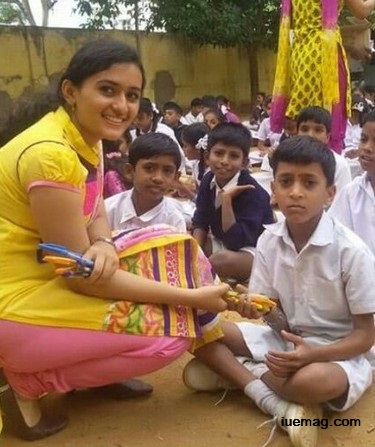 It all started in July 2014 when Aishwarya was pursuing her graduation at PES Degree College, during her class where she was learning about entrepreneurship. While she was noting down her lessons, her pen stopped working. Like most of us do, she tried to scribble for a while and later, holding the back end of the pen, shook it like a thermometer. She used another pen since the first one did not still work. She wrote for a few minutes with the second one, but unfortunately, she it stopped working too. She believes it was also a fortunate moment since her ideation began then, when she was about to throw the pen away. A couple of weeks before this incident was when Aishwarya, along with her college mates had been a part of a campaign of Shri Narendra Modi’s vision ‘Swachh Bharat’, where they had created awareness about cleanliness. Coming back to the moment when she was about to throw her pen away, she realized how the plastic material in the pen would harm the environment. She decided not to throw it, but instead use it with a new refill! She decided to start sharing with everyone to not throw the used pens and use it with a new refill.

On receiving positive responses, she felt that she had created an impact in their lives, but the impact did not remain for long when she saw people around her not continuing what they did earlier. They still began to use new pens every time. Aishwarya’s passion to protect the environment did not stop because of the changes in people who went back to normal; in fact, her zeal to do it increased. As she continued to think how she could bring about a change, she realized that a lot of underprivileged students do not even get a chance to buy pens and on the other side, lot of pens are being thrown away. She decided to get those used pens, refill them and give it to the students who could not afford to buy one. She named this initiative ‘Let’s Write Together’. This being the Eureka moment, she felt the need of guidance when she wanted to implement it. Her immediate next action was to share it with her mentor, Mr Sujit Lalwani, International speaker and serial entrepreneur. Going back to how she got connected with him, Aishwarya was a part of a platform, called as i3 - influence inspire impact, that was founded by Mr Sujit Lalwani. i3 is a platform where youngsters get a chance to connect with achievers from various domains; the delegates also get a chance to work on social projects. “i3 was one of the best decisions I have taken in my life. Earlier, I had a lot of ideas, but no direction to really implement them. At i3, I learned to plan and implement different projects. This was a platform that truly helped nurture myself. The best part here is that, there are mentors to guide us any time we are in need” says Aishwarya. 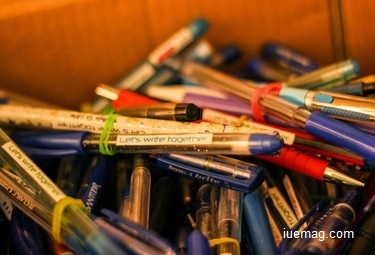 On connecting back to her mentor, she was guided on implementation plans. Immeditely, she started reaching out to schools and colleges, along with a few friends to create awareness about the project initiative and began to collect the old unused pens from the institutions. She bought refills for the pens and made the pens new ones. It was on the 14th of November 2014, the Children’s day, which was the first day of the distribution of pens to the students of a government school in the area of Domlur, Bangalore. She recalls that day, “It was so much fun for us to be removing the old refills , add the new ones and making our hands dirty, we just went back to our childhood days. The major challenge was to segregate the pens according to brands and add the right refills according to their sizes. We still enjoyed doing it when we would imagine the kind of happiness each child would have, on receiving the pens. We distributed more than 1200 pens for the first time. The responses of the kids inspired us to do more.”

As she shared, the excitement in the children in turn excited Aishwarya and her team to do it more often. They began to collect more pens and immediately ten days after the first distribution, was the second one where they distributed about 400 pens. The awareness to ‘reuse’ pens continued, when there was a breakthrough in the journey. iU Cares Foundation that supports many social projects from around the globe, decided to support the project initiative ‘Let’s Write Together’. With the support of iU Cares Foundation and with the help of World Merit India Council, the first massive distribution of pens took place on the 3rd of January 2015, when 6000+ pens were distributed to more than 1200 children, 5 pens each. “Me and my volunteers put money from our own pockets for the new refills till then. This being a bigger target, we raised funds for the first ever time. The response from the general public was incredible. A lot of them knew the importance of helping the underprivileged children through these stationeries. The World Merit India Council was a huge support to make this execution happen. It helped us reach out to more number of institutes since we had support from iU Cares Foundation. All of us would go to colleges, tell them why it is important for them to not throw away pens, collect the old pens, and at the same time, raise funds. A lot of them even gave away new pens. 2 days before the day of distribution, we sat at the terrace of my house, began to segregate 6000 pens according to their brands. There was so much more fun since there were more supporters, who altogether joined hands in helping us to add new refills. It was on the day of distribution, when all of us assigned ourselves to five different schools and distributed the pens. The kids were so excited to receive 5 pens each. A lot of them came back to us asking for pens of different colours and types. It was so wonderful to see them happy. We also addressed those students about our initiative. All of them promised to not throw away the plastics. This day was a kick-starter to our next set of executions” she states. 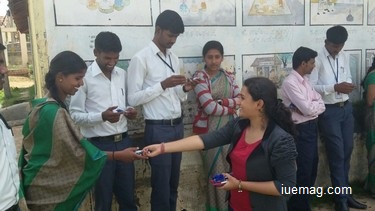 A bigger challenge for Aishwarya was to help the family understand and receive support from them. Her parents’ concern was her studies; they did not want her to get  distracted. Although she tried to share the importance, they were more concerned about her academics. At stages when she could not go for executions, the volunteers’ support helped the initiative stay active. While she continued to guide them over phone calls, they took good care of the execution part. She credits a huge part of the success to her volunteers, “There was a time when my father said he would throw away all the pens if it wasn’t cleared. One of my friends, Sukhesh helped us with a place for storing pens. Had there not been volunteers, LWT(Let’s Write Together) wouldn’t have reached this far. I would like to really thank all my volunteers - Anup, Sukhesh, Lekha, Sowmya, Poornima and many others who shared their time for the cause. Anup, my friend from i3, has always been there throughout this journey! Some of them who are working at the corporates, help us with funds. Almighty has been truly blessing us in every way possible.”

Meanwhile, Aishwarya was recognized for her selfless efforts of helping the underprivileged. In the month of April 2015, she was honoured with the Yuva Chethana Award 2015, by ‘Youth For Seva’. This recognition only continued to boost her to do much more.  They continued to execute more such massive distributions. The team began to expand in Mysore too. More than 20,000 pens have been distributed to more than 5,000 underprivileged government school students. The pens have been collected from more than 100 institutions, out of which about 37 institutes have given constant support. Some of them include MES Kishore Kendra, PES Degree College, APS School and PU College, VV Puram Evening College, St Patrick’s ITI, S Cadambi vidya kendra, KKN Tutorials, Surana  College, Sapthagiri College of Engineering, Evershine School and many others. At the same time, she manages to balance her academics, along with the project initiative and stands second in her college.

Currently, Aishwarya is also nominated for one of the prestigious award - ‘Namma Bengaluru Award’, that is given by the Namma Bengaluru Foundation, which is an initiative by Rajeev Chandrashekhar, Member of Parliament. Out of thousands of nominees in the rising star category, Aishwarya stands one amongst the top seven nominations. “Each of the nominees I got to see there, are so inspiring. I am happy that I am also recognized as one amongst them. I would want to thank my parents, mentors, volunteers, friends, institutes that are supporting and everyone who have helped us reach here” she states.  She also adds, “We are currently looking for vendors who can help us to recycle these old refills which are made of plastic. We have found one, with whom we are planning to collaborate, but we would still need support from everyone possible.”
Get the Latest & Recommended articles in your Inbox

Subscribe!
If an empty pen could teach such huge lessons of life and help create a revolution, there is so much more, that is around us, which could be utilized to help protect the environment around us. There are hundreds of youngsters like Aishwarya who have plans to help the society and create wonders; here is a message that she shares for all of them, “It’s important to get an exposure to implement your plans. Connecting with mentors who can guide you with what you wish to do is important. Today’s youth have so much potential! They can do anything; it is just the first step that is needed, there are people around who will continue to recognize and encourage them.”
Copyrights © 2022 Inspiration Unlimited eMagazine

This Page Has Inspired
1454
People So Far..
Any facts, figures or references stated here are made by the author & don't reflect the endorsement of iU at all times unless otherwise drafted by official staff at iU. This article was first published here on 6th March 2016.
IJ Kavyashree
IJ Kavyashree is a contributing writer at Inspiration Unlimited eMagazine.