This Page Has Inspired
1673
People So Far..
Introduction
How often do you see people reading texts on their watch? Rarely - if at all. Despite the fact that tech giants such as Google and Samsung are delving into wearables, the technology still hasn't gone mainstream. The capability has been around for years - there is no technical barrier to a watch that texts. But there are physical, cultural and design barriers that are holding wearable back. With wearable technology, learning more about yourself has not only become high-tech but also real-time.
From devices and apps that help you track heart rate and food consumption details to gadgets that monitor your mood and even surrounding environment, design has always been a crucial factor in determining the success of mainstream consumer electronics. No one wants to lug around a laptop that feels like an anvil in their backpack, or a smartphone that doesn't feel like something you'd want to have with you all day. But wearable technology takes that element to another level-when something is on your body it becomes more intimate.

"It becomes much more personal than just being in your pocket"

What is this Wearable Technology?
Wearable technology, wearable devices, or fashion electronics are clothing and accessories incorporating computer and advanced electronic technologies/embedded systems. 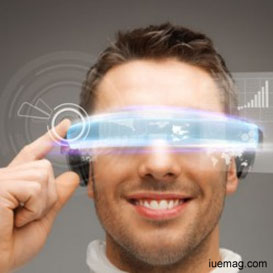 History
Wearable technology shares the vision of interweaving technology into the day to day life, of making technology pervasive and interaction frictionless.

Through the history and development of wearable computing, this vision has been both contrasted and affirmed. Affirmed through the multiple projects directed at either enhancing or extending functionality of clothing, and as contrast, most notably through Steve Mann's concept of surveillance. The history of wearable technology is influenced by both of these responses to the vision of ubi comp (ubi comp is an advanced computing concept where computing is made to appear everywhere and anywhere. In contrast to desktop computing, ubiquitous computing can occur using any device, in any location, and in any format.).

The very first wearable technology's gadget was a Calculator Watch (I had used Casio calculator watch when I was a kid) which was introduced in 1980's, then followed by a Bluetooth earring, Spy camera on tie, etc.

Applications
Since becoming popular, Wearable Technology has worked its way into many markets. The technology is now used in the field of medicine, fashion, footwear, Textile industries, Industrial Automations, Aviation, Entertainment, Defence purposes and many more. 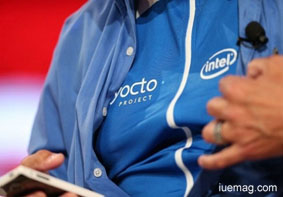 1. Health & Textile Industry
We have seen many fitness tracking devices emerge over the past year or so - mostly in the form of watches and wrist bands. But, perhaps, we are going about wearable technology all wrong. May be it shouldn't arrive as an extra accessory, instead be embedded directly into the cloth we wear.

Yes, Intel has launched health - tracking smart T-shirts!!
They are used to keep a track on the heart beat and other vitals of wearer. It's said to communicate with the app on your smart phone to provide all sorts of metrics.

2.Fashion & Entertainment
Google has created the most sought-after sci-fi-looking gadget that everyone wants to wear at least once. But, their uses are currently limited. Google glasses are slick, comfortable design made to take hands free photos. The device also includes Head-tracking navigation systems.

3.Defence In the heart of the silicon valley, lining the wall in one of the world's most advanced Robotics labs, a team of researchers at SRI Internationals, which gave the world the mouse, surgical bots, Siri, is stitching together lightweight under-suits embedded with batteries, wires, computers and motors. They are effectively making "Wearable Robots" with an actuator along the calf that thug up with every step, taking off some of the load for human being. It literally pulls you up by your bootstrap.

It fits under the clothes, it's quiet, it's comfortable, and it works very synergistically with the movements and just adds a little bit of energy at the right time.

4.Optical devices
Google launches its Smart Contact lenses. The project aims to assist people with diabetes by constantly measuring the glucose levels in their tears. The project is being carried out by Google X and it is currently being tested using prototypes.

Disadvantages
As each and every technology has advantages, they do have their own disadvantages.

The Future of Wearable Technology
Wearable Technology is an undeniable technology trend and many top notch brands such as Nike, Apple, Samsung, Google and Sony are all bringing out wearable technology products to satisfy customers growing awareness and demand for new products. People who are gear hungry already understand and anticipate this, while the rest are soon going to get swept by the strength of this tsunami.

The field is wide open So far, there's no clear winner running away with the market, though many are trying. Nike, Fit bit, and other fitness bands dominate about 90% of wearables sales. But Sony, Pebble, and others have also built devices with more features.

Google, meanwhile, is going after smart eyewear with Glass.

What does that mean? Anyone could have a hit, even if it's not a big name like Samsung. There're also still plenty of opportunities for someone to come up with something amazing that blows everyone away. It's clear that no one has really yet come up with the magic combination that attracts the masses.

Regardless of these pros and cons, wearable technology is obviously a hugely exciting concept. There are many products being produced right now which could easily be placed under the banner head.

While wearable technology won't be replacing smartphones any time soon, and likely won't be used widely for few years, the future is bright with loads of opportunities for this fledging industry.

At first, it will seem strange and perhaps a little scary, but as the time continues on these, products will almost certainly become more popular. They have too much potential to be ignored. So keep an eye on wearable technology. It's here to make our lives easier, to grant us new opportunities.
Source:
1. https://harvardmagazine.com/2014/01/wearable-robots
2. https://en.wikipedia.org/wiki/Wearable_technology
3. https://www.thedailybeast.com/articles/2014/01/09/is-wearable-technology-a-fad-or-the-future.html
4. https://www.neongoldfish.com/blog/social-media/the-advantages-and-disadvantages-of-wearable-tech/
Copyrights © 2023 Inspiration Unlimited eMagazine

This Page Has Inspired
1673
People So Far..
Any facts, figures or references stated here are made by the author & don't reflect the endorsement of iU at all times unless otherwise drafted by official staff at iU. This article was first published here on 31st May 2014.
Subhash K C
Subhash K C is a contributing writer at Inspiration Unlimited eMagazine.