Women Technologists To Be Honored For Their Leadership And Achievements At The 22nd Annual WITI Summit
This Page Has Inspired
1086
People So Far.. 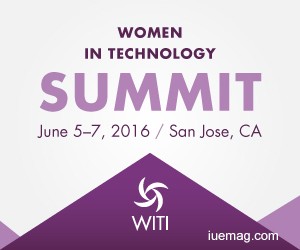 WITI  (Women in Technology International), the leading global business organization for women in technology with more than 150,000 members worldwide, announced its 2016, annual Hall of Fame winners who will be honored at WITI’s 22nd Women In Technology Annual Summit which will be held in San Jose, CA from June 5-7, 2016 at DoubleTree by Hilton San Jose. An awards ceremony will be held from 5:00-6:30 PM, followed by a special celebration to meet these exceptional women.

The WITI Hall of Fame, considered to be one of the most prestigious honors for women in technology, was established in 1996 to recognize, honor, and promote the outstanding contributions women make to the scientific and technological communities that improve society and business. The winners are also acknowledged for demonstrating a commitment to supporting and mentoring women and girls worldwide. A listing of past Hall of Fame winners can be found at: https://witi.com/halloffame.

The Five Distinguished recepients of the 2016 21st Annual Women in Technology International Hall of Fame awards are:

"Over the past year the topic of equality for women has amplified tremendously, especially in the tech sector," explains WITI Founder and Chairwoman, Carolyn Leighton. "The Women in Technology International Hall of Fame provides a perfect platform to change the ‘equality factor’ by magnifying the amazing talent and contributions that this year’s inductees have, and continue to make, in the technology and science sectors.”

Kimberly Bryant is the Founder and Executive Director of Black Girls CODE, a non-profit organization dedicated to “changing the face of technology” by introducing girls of color (ages 7-17) to the field of technology and computer science with a concentration on entrepreneurial concepts.

Ms. Bryant has enjoyed a successful 25+ year professional career in the pharmaceutical and biotech industries as an Engineering Manager in a series of technical leadership roles for various Fortune 100 companies such as Genentech, Merck, and Pfizer. Since 2011, she has enabled Black Girls CODE to grow from a local organization serving only the Bay Area, to an international organization with seven chapters across the U.S. and in Johannesburg, South Africa. Black Girls CODE has currently reached over 3000 students and continues to grow and thrive.

In 2012 Ms. Bryant received the Jefferson Award for Community Service. In 2013 she was selected by Business Insider as one of “The 25 Most Influential African-Americans in Technology,” and was also named to The Root 100 and the Ebony Power 100 lists. Also in 2013, Ms. Bryant was invited to the White House as a Champion of Change for her work in tech inclusion and for her focus on bridging the digital divide for girls of color. In 2014 she received an American Ingenuity Award in Social Progress from the Smithsonian, along with earning the Inaugural Women Who Rule Award in Technology via Politico. Ms. Bryant currently serves on the National Champions Board for the National Girls Collaborative Project, and the National Board of the NCWIT K-12 Alliance.

Roberta Banaszak Gleiter earned her B.S. in chemical engineering from Purdue University in 1960, married her college sweetheart after graduation, and spent the next two decades raising her family. During that time she initiated programs to improve math education and introduced her community to women in engineering.

Ms. Gleiter’s career was launched in 1980 when as a re-entry woman she joined The Aerospace Corporation with a focus on satellite and ground systems management and project engineering. Early on, she pioneered environmental efforts at government satellite launch sites and was recognized with a Programs Group Achievement Award. Ms. Gleiter is a certified Hazardous Materials Manager at the Master’s level. She served as Principal Investigator for research on Department of Defense Acquisition Reform, is the author of numerous technical publications, and has received many engineering accolades from both the U.S. Air Force and Aerospace. As well, she has earned a number of awards for engineering and leadership.

Currently Ms. Gleiter is the CEO and board chair of the Global Institute For Technology & Engineering (GIFTE), a nonprofit educational public service organization dedicated to elevating the status of women in the international technology and engineering work force. Throughout her career, Ms. Gleiter has supported STEM awareness on the Congressional level. Internationally, she has broken barriers related to technical women in China, France, Japan, Canada and New Zealand. She is a Fellow of the Society of Women Engineers, as well as a Fellow of the Institute for the Advancement of Engineering.
Get the Latest & Recommended articles in your Inbox

Harriet Green, General Manager of IBM Watson Internet of Things, Commerce and Education, is ushering in a new era of cognitive business to help clients unlock value from the massive amount of data generated each day. Ms. Green has led extraordinary business transformations across industries. She has a proven track record for developing and implementing strategies for profitable growth and increasing shareholder value in global technology, logistics, travel and consumer sectors. She believes in and encourages diversity, inclusion and curiosity, inspiring teams to unite around driving results and meeting the changing needs of the constantly transforming market

Prior to IBM, Ms. Green led the global transformation of Thomas Cook Group as CEO, for a market capitalisation increase from £150 million to over £2 billion in less than two years. Before Thomas Cook, she was CEO of Premier Farnell, where she grew the business in China and India while establishing a web sales channel and industry leading online community. Earlier, Ms. Green was senior vice president of Arrow Electronics, living and driving business in four continents. Additionally, she served as managing director of the Macro Group and is a non-executive director of FTSE 100 BAE Systems.

Ms. Green received her OBE in 2010 and was recently recognized as the UK Business leader of the Year and Veuve Clicquot Business Woman of the Year. She has also served two parliamentary terms as a member of the U.K. Prime Minister’s Business Advisory Group, and is a founder of the non-profit One-Voice.

While studying for her doctorate in electrical and electronic engineering, Dr. Yates was also a semi-professional musician. As president of the Victoria Youth Symphony Orchestra, she developed skills which positively impacted her current work in networking and service quality management. After receiving her Ph.D. from The University of Melbourne, and Bachelor of Engineering (Honours) and Bachelor of Science degrees from the University of Western Australia, Dr. Yates moved from her homeland of Australia to the United States in 1999 to pursue her career in STEM.

Dr. Yates has been honored with the AT&T Fellow Award in 2012, the Science and Technology Medal in 2006, the Victorian Photonics Network Achievement Award in 2004, and was named a Top Young Innovator by Technology Review in 2003. Dr. Yates holds over 20 patents for her groundbreaking research in networking.

Ellie Yieh is corporate vice president for Advanced Product Technology Development at Applied Materials, Inc. She is responsible for the technical and operational excellence of the company’s state-of-the-art Maydan Technology Center R&D lab and works closely with customers and business units to drive advanced product development and technology roadmaps.

Having joined Applied in 1989 as a process engineer in the Chemical Vapor Deposition (CVD) group, Ms. Yieh has headed several successful product developments over her 20-plus years with the company. She has held a variety of positions including product unit head of the Low k Dielectric Division and general manager of the Gap Fill, Etch, and Dielectric System and Modules business units. She has led her teams to deliver significant profitability and market share growth, build strong customer relationships, and develop industry standard technologies. In addition, Ms. Yieh is the executive sponsor for the Women’s Professional Development Network, Applied’s largest Employee Resource Group, with over 300 employees.

Ms. Yieh holds more than 90 semiconductor engineering patents and was named among the 2015 “Top 50 Most Powerful Women in Technology” by the National Diversity Council, and a 2010 "Women Worth Watching” by Profiles in Diversity Journal magazine. She holds a Bachelor of Science degree in chemical engineering from the University of California, Berkeley.

WITI, founded in 1989 by Carolyn Leighton, is the world's leading trade association for professional, tech-savvy women committed to using technology, resources and connections to advance women worldwide. With a global network of exceptionally successful women leaders, WITI has established powerful strategic alliances and programs to provide resources, and opportunities within a supportive environment of women committed to helping each other succeed. WITI's mission is to empower women worldwide to achieve unimagined possibilities and transformations through technology, leadership and economic prosperity. For more information please visit: https://witi.com
Copyrights © 2023 Inspiration Unlimited eMagazine

This Page Has Inspired
1086
People So Far..
Any facts, figures or references stated here are made by the author & don't reflect the endorsement of iU at all times unless otherwise drafted by official staff at iU. This article was first published here on 13th May 2016.