Redemption - The Advent: By Kimon Alexander

A complete Sci-Fi Mystery Thriller that would leave you only on the last page post you are done reading through it completely. Catch a few details here before you jump into the complete ride of thrilling fiction by Alexander Kimon Acavalos. Read ON!
This Page Has Inspired
1080
People So Far.. 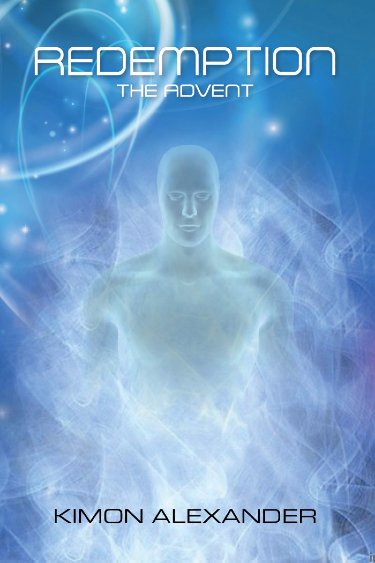 About the Book "Redemption - The Advent" By Alexander Kimon Acavalos

In a world where science and technology are advancing at breakneck speeds and greed appears to be the main driving force in human affairs, the spiritual meaning of the old systems that govern us is becoming increasingly outdated. Writing this story as a contemporary mystery/thriller, while interweaving the involvement of an out- worldly moral force, it suggests that there is more to life than material consumerism.

Two plagues the world combat every day, are the proliferation of drugs and religious radicalization.
The book tackles these two topics by describing two contemporary adventures centered in New York and having a wide international exposure in a number of European and Middle Eastern countries.

The novel falls in the science fiction genre because it extrapolates on advances of modern technology and presupposes the existence of a superior intelligence guiding Humanity’s evolution. In all other respects the events described could be happening all around us at this very moment.


The narrative is set out in three sections(labeled books)

Describes the highjacking of a brain enhancing microchip by a ruthless drug lord, giving him mind control capabilities. He coerces a naive scientist into selling him his invention and utilizes it to expand his business empire. In his quest for power King suppresses all opposition and treats adversaries with contempt and abuse, especially in encounters with members of the opposite sex. 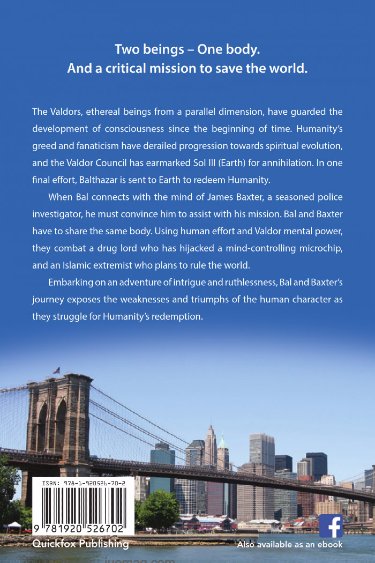 Describes a religious fanatic, who exploits faith and psychology to brainwash followers into acts of terrorism. He meticulously plans sophisticated insurgencies to enforce his supremacy and ideology in a drive for world domination. In the process the Sheik exhibits utter callousness for his victims and justifies his actions by professing unequivocal devotion to his faith.

Describes Balthazar, an ethereal being from a parallel dimension. He is sent on Earth, to ensure that Humanity’s spiritual evolution is not impeded, by the greed and selfishness of individuals. Having no physical properties Balthazar has to share the body of James Baxter a government agent to achieve his objectives. This symbiosis of two minds existing in one body is challenged, when Balthazar has to cope with human emotions and Baxter has to comprehend alien concepts of reality.

Finally the three seemingly unrelated stories blend into a conclusion that should astonish the reader. The spiritual interaction outlined in the novel will resonate with anyone that has paused to ponder on the mysteries of our existence.

When questioned by iU eMagaizne's Authors' Paradize team this is what Alexander Kimon Acavalos had to share about his journey as an individual to becoming the author of this wonderful Sci-Fi Novel.

AP: What inspired you to write this book?

I am an ethnic Greek, brought up in a conservative religious home, studied civil engineering, graduating with an Msc degree from a Canadian unuversity and now living in South Africa. My career necessitated travelling and living in a number of countries with different cultural backgrounds. In so doing I could compare diverse religious beliefs realising that they cannot all be right and 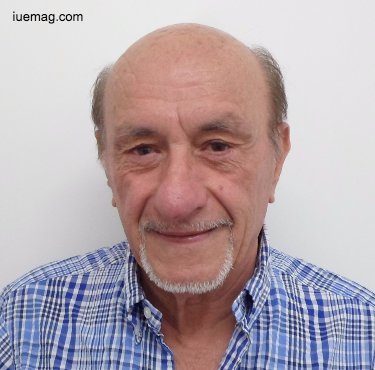 there must be some common denominator that links them together. Another human trait that disheartened me was the cruelty and indifference exhibited by persons in privileged positions, especially towards those with different ideologies. Not being able to actively correct the disharmony around me, I imagined a fictional situation where a superior intelligence could bring humanity together by thwarting evil intentions and demonstrating a meaningful purpose to life. I therefore wrote this novel, interweaving two very contemporary adventures interlaced with superhuman moral guidance in such a way as to demonstrate that only empathy and understanding will produce harmony and peace in the world.

AP: Who's your inspiration when it comes to becoming an author?

Other science fiction writers such as Isaac Asimov and Arthur C Clarke who have woven imagination around philosophical issues demonstrating that reality is often starnger than fiction. In the words of Khaled Hosseini- “Writing fiction is the act of weaving a series of lies to arrive at a greater truth."

AP: How do you feel as a published author today?

I feel that my book although entertaining as a mystery/ thriller, it has a deeper meaning interwoven in the characters portrayed. It causes a reader to pause and ponder philosophical questions about the meaning of life, the purpose of creation and why do bad things happen to good people. However I get increasingly frustrated by my inability to get the message publicised for people to notice.

AP: Who are the people you would love to thank & mention about in this journey of having become an author?

I would like to express my gratitude to all my teachers who have taught me to think independently of established preconceptions, divine providence for the lessons that life has taught me and my family who have been supportive while I endeavoured to consolidate my thoughts, experiences and aspirations in the nutshell of a novel.

AP: What's your piece of advise for other aspiring authors?

Write the way you feel and blend your life’s experiences in the cahracters you create. In this way you will make the narrative come alive and touch the reader’s soul.
Get the Latest & Recommended articles in your Inbox

Subscribe!
We hope you love reading this book, as much as the authors paradize team loved talking about this exciting book by Kimon Alexander. If you haven't already jumped on to the links to buy this book, here are the links: Amazon.com | Amazon UK

You can also follow the author, connect with him, share reviews personally about this book on Alexander Kimon Acavalos's site for this book: Redemption - The Advent#StayInspiredOnTheGo #InspirationUnlimited #AuthorsParadize #DigiWise

This Page Has Inspired
1080
People So Far..
Any facts, figures or references stated here are made by the author & don't reflect the endorsement of iU at all times unless otherwise drafted by official staff at iU. This article was first published here on 21st November 2017.