Monsoon, The Life Force of India

Monsoon is a magical word as far as India is concerned. We eagerly await its arrival every year in June. Our economy, arts, literature, music, movies, everything, revolve around the rains. What is this monsoon? Why is it of so much importance to us?
This Page Has Inspired
1124
People So Far.. 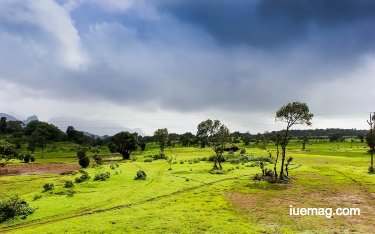 The word “monsoon” is derived from the Arabic ‘mausim’ which means season. Monsoon is a gigantic sea breeze. Normally, warm air over the land rises up leading to low pressure. This causes heavier, cooler air over the ocean to move into the land. This phenomenon is called sea breeze which occurs every day.

Ancient sailors and navigators had long back observed this phenomenon while on their sea faring journeys. It is said that Romans used the breeze for their navigation during their trading with India. Vasco da Gama is said to have a good knowledge of this and used it effectively to reach India. But the scientific analysis of this weather system was first done in 1686 by the Secretary of The London Royal Society, Sir Edmund Halley, of Halley’s Comet fame. His research paper titled “A historical account of the trade-winds and monsoons observable in the seas between and near the tropics with an attempt to assign the physical cause of the said winds” gave an insight into the behaviour of this weather system and also was the first to propose that the difference in temperature between sea and land air mass was the reason for the monsoon effect.

As stated above, monsoon over Indian subcontinent is a very complex weather system. The reason is not just the warm air rising creating low pressure over land, and cooler sea air flowing in. The climatic conditions in surrounding regions too have a bearing on it. The father of monsoon science, Sir Gilbert Walker has studied Indian monsoon and has come up with an interesting link between Indian monsoon and the flooding of the Nile in Egypt. He was the first to discover the Southern Oscillation, popularly called El Nino. The warming of the waters of Pacific Ocean is called El Nino Southern Oscillation (ENSO) which has a huge impact on the monsoon over the subcontinent. The years that have El Nino (meaning ‘the boy’) effect will result in poor rains. The opposite effect, called La Nina (meaning ‘the girl’), or cooling of the Pacific Ocean, results in heavy rains.

The reason Indian monsoon generates such interest and importance is because of the unique geography of this area. On one side is land, surrounded on all three sides by water. There is the hot Thar Desert at one end and a huge wall called the Himalayan mountains at another end. During the hot summer months, the land becomes very hot and causes the warm sir to rise. This is aided by the hot Thar Desert, and the rocky plains of the Deccan Plateau. The rise of warm air is further fuelled by the North-South mountain chain of Western and Eastern Ghats. This is an activity that does not take place in a short time, but goes on throughout the summer. April and May are the hottest months in this area. 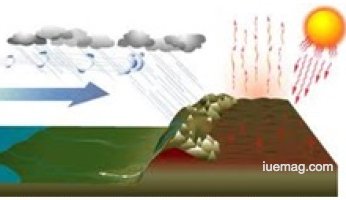 The high temperature build-up takes place during this time and cause low pressure over the land over a period of time. Just as liquids flow from higher place to lower place, gases flow from high pressure to low pressure areas. The cooler, heavier, moisture laden air over the Indian Ocean moves into the low pressure area over the Indian landmass. Normally this starts in the last week of May and enters India through Andaman Nicobar Islands, and mainland India through Kerala in the first week of June. The heavy clouds pour the moisture carried from the ocean over the land as rain. The rain so formed further releases more latent heat which causes the clouds to advance further and cover the whole country. It takes about a month and half for this gigantic sea breeze called Southwest Monsoon to cover the whole of Indian landmass. Normally the clouds travel the same direction every year.


Indian monsoon can be classified as Southwest monsoon and Northeast monsoon.

This is during the period between June and September, which is commonly called rainy season in India. This is also referred to as summer monsoon. Southwest monsoon has two arms, the Arabian Sea arm and Bay of Bengal arm. Arabian Sea arm normally starts in first week of June and enters India through Kerala, and travels up along the Western Ghats of Kerala, Karnataka, Goa and Maharashtra. This is the time when there is heavy rain in the coastal and highland areas of this region like Malabar in Kerala, Malenadu in Karnataka, Konkan in Goa and Sahyadri in Maharashtra. The rain shadow region of the Western Ghats receives comparatively less rain during this period.

Almost around the same time, the Bay of Bengal arm enters India through Andaman Nicobar Islands and travels towards the north east part of the country. Due to this arm, Mawsynram of Meghalaya receives the highest rain in the world. It has replaced its neighbour Cherrapunji as the wettest place on earth (Similarly, another wet place Agumbe in Karnataka has been replaced by its neighbouring village, Hulikal). The monsoon clouds, having blocked by the hills of the northeast and the Himalayas, turn towards the west and pour their contents on the Gangetic plains of north India. The high wall of the Himalayas does not allow a single drop of rain to pass on to the northern Tibet, or Ladakh in the rain shadow region of Kashmir. This is why Ladakh is called high altitude desert or cold desert. In the north, both the arms meet. 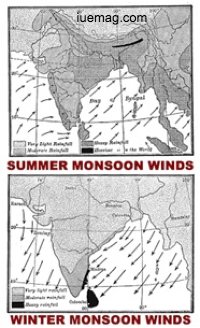 It is called retreating monsoon or winter monsoon, due to its direction of flow being opposite to that of Southwest monsoon. This starts around September when the sun is moving towards south. The sun being in southern hemisphere, winter starts setting in on the northern hemisphere and the landmass starts cooling down. Meanwhile, the water of the Indian Ocean in southern hemisphere is warmer due to the onset of summer. Solids cool faster than liquids, so the air above the landmass is cool and heavy compared to the light, low pressure air above the Indian Ocean. This causes the high pressure, cooler air to flow from the northeast towards the southwest. Here also, the unique geography of the Indian subcontinent helps in creating another monsoon. The Bay of Bengal being in the path of this flow of air, the moisture is picked up by the retreating monsoon, causing rainfall over the Bay of Bengal, Tamilnadu, Andhra Pradesh, and eastern parts of Karnataka. But the rains of the Northeast monsoon are in no way match to the ferocity of the Southwest monsoon rains.

In short, monsoon is a great contributor to the economy of our country. Markets rise and fall due to good or bad rains, due to failure of the rainy season, or due to floods during excess rains. So monsoon can be rightly said to be the backbone of our economy. Indian culture, religious rites, in fact the whole lifestyle revolves around the rains. Rains have been the inspiration behind numerous movies, songs, poems, literary works, music and art. Many Rajasthani and Moghul paintings have monsoon, dark clouds, dancing peacocks and rain as their theme. The Rajputs of Rajasthan and the Moghul kings built rain pavilions just to enjoy the rains. This importance given to rains is not a surprise given the hot and parched nature of that region.
Get the Latest & Recommended articles in your Inbox 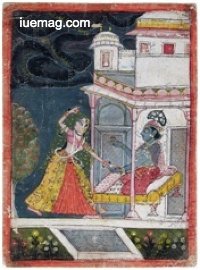 Kalidasa in his epic work, Meghadootam has clearly mentioned the path the rain bearing clouds take while on their journey to the north. He has accurately written where the clouds stop, when they resume the journey and the direction they take. He clearly states that the clouds are formed due to water, air, smoke and electricity (“Dhoomra jyoti salila marutam sannipatah kva meghah”). There is still no answer how he could predict all this hundreds of years ago in an age when there were no aircrafts or special scientific instruments. It has been found that even now the rain bearing clouds move in the same way as stated by Kalidasa in his work. Dr R.R. Kelkar, former Director General of India Meteorological Department has done extensive research on the scientific aspects of this literary work, written about 1600 years ago.

But unfortunately, the present years have made the monsoon erratic due to interference of humans in the form of pollution, global warming and deforestation. If this unhealthy trend continues at this pace, the glory of the monsoon would soon be a thing of the past, unless we humans wake up and reverse this trend.
images source: Internet | The article is in direct words of the author. If there are any content matches elsewhere on the internet feel free to share them in the comments.
Copyrights © 2023 Inspiration Unlimited eMagazine

This Page Has Inspired
1124
People So Far..
Any facts, figures or references stated here are made by the author & don't reflect the endorsement of iU at all times unless otherwise drafted by official staff at iU. This article was first published here on 28th November 2019.
Kuldeep Shiruru
Kuldeep Shiruru is a contributing writer at Inspiration Unlimited eMagazine.
Unverified