This Page Has Inspired
908
People So Far..

These colorless diamonds are great source for exquisite high-end jewelry that make the undeniable classics in the industry and fashion, but every year they get fewer and fewer admiring gazes. It’s hard to surprise the crowd with ordinary diamonds these days. People went from “WOW! Real Diamonds!” to “Oh, diamonds? OK”. And that’s natural, as every trend has its limits. Is there a way to spice up diamond jewelry? How about adding colors to it?

The color of this winter is black. All-black outfits return to trends, though they were always a win-win option to go for. The great idea is to complete the look with jewelry featuring black diamonds. Their hypnotizing darkness adds mystery to the image, and you can be sure that your diamond jewelry will once again absorb the attention along with the light.

But what’s the secret behind the black diamonds? They may be divided into several types. The first one is the natural black diamond also known as carbonados. It gets its color from the graphite inclusions, the more the diamond contains those imperfections, the darker it gets. The carbonados are rare and can be found only in some mines of Brazil and Central Africa. But it’s highly unlikely the natural stone will be of even deep black color, it is typically of a rather unappealing shady hue you won’t be happy to see in your jewelry. That’s why most often the diamond gets treated or enhanced.

There are two ways to enhance the color of the diamond. The first one is heat treatment. The diamonds with lots of inclusions are placed in a special chamber together with black carbon for 24 hours and are affected with high temperature and high pressure. This results in the deep black color of a diamond.

The second way is radiation. It’s frequently used to get the green color of a diamond, but the larger dose makes the stone very dark green, really close to black. That’s why with a bit of lighting and a magnifying glass you can actually tell by the greenish shading whether the black diamond was irradiated.

There are also black diamonds that are grown in the lab, and they are called stimulants. The chances you’ll see them in the jewelry are rather low, as they are too expensive to make, so the show is not worth the candles. 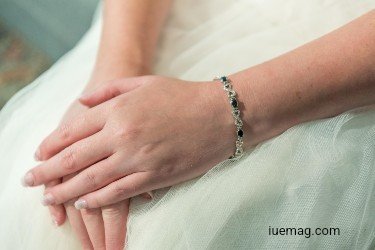 All those black diamonds are real, it’s just that some may be a bit upgraded in order to turn flaws to benefits. And the jewelry industry, as well as jewelry connoisseurs do really enjoy all the advantages the sophisticated black diamond brings.

Though trendy only in recent years, black diamonds are not new in the world of jewelry. There are gemstones that make not only jewelry but legends and world records. Probably the most notorious black diamond is The Black Orlov. It is known for the rumored curse it bears. Legend has it that it was once one of the eyes in the Hindu god Brahma’s statue and weighed 195 carats. After it was stolen the sequence of deaths haunted its owners, with Russian princess Nadia Vygin-Orlova among them. In the end, the diamond was cut into 3 pieces hoping that it would break the curse, and The Black Orlov became the center of a brooch, surrounded by 108 colorless diamonds, a part of 124 diamonds a necklace.

The next two famous black diamonds became jewelry masterpieces in the hands of the jewelry genius Fawaz Gruosi. The Gruosi Diamond: Queen of Black Diamonds is the largest heart-shaped black diamond of 115.34 carats from India. Surrounded by 378 colorless diamonds it adorns the breathtaking white gold necklace. Black diamonds are known for their fragility during the cut process, and because of this reason, the oval shape the stone initially had to get was changed to the current variant. His second famous black 312.24 carats diamond, The Spirit of de Grisogono, is the mogul-cut stone that became the center of a white gold ring, completed by 702 smaller white diamonds.

The Largest Cut Fancy Black (diamond) by Guinness World Records since 2006 is the HEX.com diamond. The gemstone has 55 facets and weighs 555.55 carats. The number 5 that is seen in its parameters refers to the hamsa, the amulet in the shape of a palm, sacred in the Middle East and North Africa. In February 2022 it was bought for $4.3 million via cryptocurrency from Sotheby’s Auction. The black diamond was known as “Enigma” before it was sold to the current owner, Richard Heart, who changed the previous name to commemorate his blockchain platform. This black diamond is yet to find its jewelry piece.

Those are the opportunities the extravagant black diamond possesses, just imagine what it is able to do in modern jewelry! The black diamond bracelets are a really popular item these days. They have become the favorite men’s iced-out bracelets and a very edgy option for women. The variety of bracelet designs grows immensely when those unique fancy black colored diamonds become the part of the jewelry, adding the options for creative color combinations. 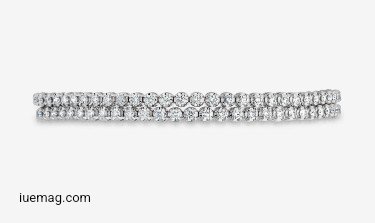 The popular iced-out bracelet styles become completely different jewelry when the colorless stones are changed to the black diamonds. As an example, let’s take the famous Tennis bracelet. It’s already the gorgeous timeless classic, but when white gems are replaced or mixed in the design with the black diamonds, the conservative Tennis bracelet becomes the jewelry radiating freshness and style.
You’ve probably heard the Tennis bracelet history, to know that it has little to do with the game itself, and it doesn’t mean that it is created only for the people who play tennis. It got its name due to the situation that occurred in 1987 during the US Open match. Chris Evert, the famous tennis player, has lost her diamond row bracelet in the middle of the match and asked to stop the game for her to find the jewelry.
The bracelet has become the top jewelry trend and got itself a name it’s known under even now. The Tennis bracelet has lots of variations now, including changing colorless diamonds to black ones, adding a few more rows to the style, and experimenting with diamond cuts. Most important, the Tennis bracelet style only won from the popularity of black diamonds.

The Gucci chain bracelet is yet another piece of jewelry that gets iced out pretty often. But the style itself is too flashy for boring colorless gems. The large flat oval links with a vertical bar in the middle would benefit more from the combination with black diamonds. The alteration of black and white creates extravagant contrast, both classic and sharp. This bracelet will without any doubt emphasize your sense of style and exquisite taste.
Get the Latest & Recommended articles in your Inbox

Subscribe!
The Cuban link bracelet covered with white diamonds is the favorite bling jewelry of rappers from the 1970s. Though it has made a major comeback in recent years, fashion influencers soon realized that it requires an upgrade. The black diamonds have become the game changer here. The Cuban link bracelet style received the new life with the fancy black diamonds and has once again proven how iconic it can be.
The black diamond bracelets are the items that create not only style, but also history. If you want to spice up your look, opt for dark colors for your gems. Someday, black diamonds may leave the trends as well, but just like the colorless ones, they will forever remain classic.
Copyrights © 2023 Inspiration Unlimited eMagazine

This Page Has Inspired
908
People So Far..
Any facts, figures or references stated here are made by the author & don't reflect the endorsement of iU at all times unless otherwise drafted by official staff at iU. This article was first published here on 29th November 2022.