5 of the Best Walking Trails in Europe

This Page Has Inspired
547
People So Far..

Hiking holidays are great for a whole range of reasons. They’re fantastic for your health, and they’ll expose you to the sort of spectacular scenery that you might otherwise have missed out on. What’s more, having put in the effort to get to the top of a hill, you might find that the view is just that little bit more satisfying.

While the trail itself can be a great experience, it is imperative for you to get your body ready for the trail. You could start with as simple as starting to move around more and having a walking schedule.

What makes Europe good for hiking?

The continent is home to a range of different landscapes, packed into a relatively small area. You can be walking over mountains one day, and across plains the next. What’s more, in comparison with other parts of the world, it’s accessible and inviting for Brits.

Let’s take a look at some of the best trails on offer for those looking for walking holidays in Europe.

The Grande Randonnée trail on the French island of Corsica has earned a reputation for being among the continent’s most grueling. It’s extremely up and down for the entire 180km trail, and it’ll take a seasoned hiker around twelve days, walking (or rather, scrambling) for around ten hours each day. The trail is marked with red and white blazes, and it’s impassable during winter. The locals suggest that late June up until October represent the best time to take on this particular challenge.

For ambitious hikers and climbers, the summit of the Matterhorn might be a long-term goal. It’s the most iconic peak in the Alps, but you needn’t climb to the very top to get the most from the area. You can explore the surrounding Alpine landscape, on foot during summer, or on skis during winter. 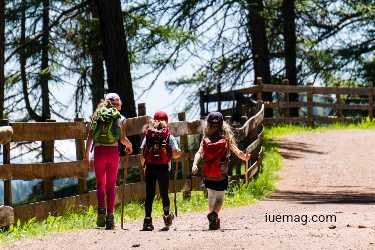 This long-distance trail will take you through the spine of the UK, through the hilly terrain right in the centre. It’s heavy on the moorland and less mountainous than some of the other entries on this list.

Cinque Terre, or Five Towns, can be found near the top of the Italian Riviera, which only recently became accessible via road. You’ll get spectacular views of the harbors nestled in the cliffs beside the Mediterranean. There’s a sense of cultural isolation here, despite the fact that you’ll be close to civilization throughout your many hikes.

The Hornstrandir Trail, Iceland If you’re going to enjoy the remote wilderness, then it’s difficult to beat Iceland. Thousands of miles from the European mainland, it’s as close to the middle of nowhere that a hiker can comfortably get. The glacier-sculpted landscape is as awe-inspiring as it is vast. To get to this particular trail, the Hornstrandir, you’ll need to take two flights and a ferry – and you’ll need to book well in advance.

Image 1: Image by Hermann Traub from Pixabay
Get the Latest & Recommended articles in your Inbox

This Page Has Inspired
547
People So Far..
Any facts, figures or references stated here are made by the author & don't reflect the endorsement of iU at all times unless otherwise drafted by official staff at iU. This article was first published here on 3rd November 2022.