Sujit Lalwani is the founder of i3, adad and iU eMagazine. He is also the president of 36Meals Trust & iU Cares Foundation
This Page Has Inspired
2407
People So Far..
C3W was a great event for me as it brought me in close touch to someone about whom I would love to share with you all. It is difficult to become an inspiration for even one person, it is ever more difficult to become an inspirational speaker and to lead every moment of life in an inspiring manner. But it is not difficult if you see him in action. Inspirational Lectures to a million! Thousands of fans!! Hundreds of small projects that will bring smiles to millions!!! Add to it an online magazine that has been prepared for billions! 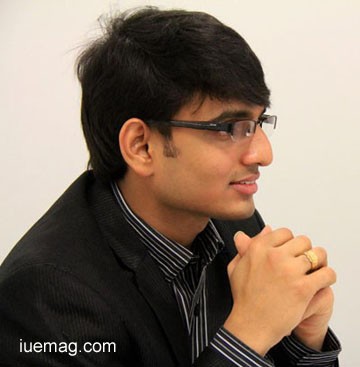 I am talking about Sujit Lalwani, hardly a quarter of a century old on this planet, but sparks tremendous enthusiasm, energy and positive attitude. He is truly infectious and mesmerizes people in seconds. He visited our University and took away the attention and direction of all the students who listened to him.

He is an engineering graduate, but I would call him a born entrepreneur. Even before completing his engineering, he was an entrepreneur and was able to turn ideas into actions. His outstanding knack in solving problems through small solutions gave him the opportunities all around himself (which were problems for others).

He started off quite successfully with network marketing but found that he was made for something more meaningful. He started again from zero and it took him only a small time to reach pinnacles in what he was aiming for. He is now a recognized inspirational speaker, writer and motivator. He comes with an encompassing soul that cares for this planet, the people around and for human values. He takes up social causes- one after another and converts them into enterprising solutions and is so enticing with his ideas that all his enterprises are thronged with passionate team-workers.

Son of an entrepreneur, Sujit didn't take the easier route of settling down in the established business of his father, but he took a new course for himself, the path never chosen by any of his predecessors. He carved out a niche for himself in this competitive world with his sheer capability. 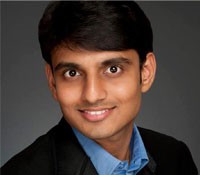 All these achievements at a young age has not changed his life vision, he still is the same person attached to the ground realities of life. Born on February 14, 1987 he is the founder and Director of IUITE Business Solutions Pvt. Ltd. popularly known as Inspiration Unlimited(IU), founder of charity 36meals which advocates to prevent food wastage and also the author of an inspiring book "Life Simplified!"
He looks at problems as possible solutions and his solutions are based on local resources, local people and local initiatives. He invites the younger generations to take a hand in solving the problems of modern times. He mobilized people to use old newspapers to convert them into paper bags - IU Newspaper Bag Project - which enabled people to evolve newer methods of paper re-use. His achievements out-age his physical age. He has emerged as an inspirational writer, orator, planner, executor and entrepreneur. He is now listed in visiting faculty / visiting resource person in a large number of well-established institutions. He is also a listed speaker with Moscow Speakers Bureau. He was the One Young World Ambassador who represented India at the International Conference of One Young World (OYW), 2011 held at Zurich, Switzerland. 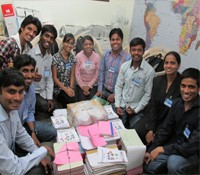 He was also the returning ambassador and a Speaker for the OYW conference held at Pittsburgh in the month of October, 2012. He was invited by the plenipotentiary of the President of Russia to share his ideas at the VISIT RUSSIA Forum held on May 25-26, 2012, an International Tourism Forum. He was among the 16 YOUR BIG YEAR 2012 Finalists chosen from over 60,000 participants from over 212 countries.
He was recognized with the award of 'High Service to Society at a very Young Age' by LIONS Club in the year 2010 at State Level. He was also interviewed on TV9 News as a Success story from Bangalore and Suvarna News for his social initiatives. He was interviewed on Nepal Radio 98.8FM as a Youth Icon and has featured in News frequently in Nepal ever since.


We had created a team for hospitality and logistics of C3W. This team consisted of four energetic and enthusiastic students. These students were as under:

Rishabh from 1st year BBA | Amit Pathak from 2nd year B.Com (Corporate Secretary ship) | Aditya from 3rd year B.Tech | Prince from 4th year B.Tech | This team got a new name from Sujit: Team 1234. This team has gotten inspired from Sujit Lalwani and started many projects for social development. One of the projects that this team has taken up is to re-use paper (used one side) for preparing notebooks for poor students of government schools. Let us hope that they do something outstanding in this project. 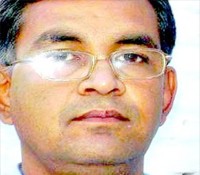 This Page Has Inspired
2407
People So Far..
Any facts, figures or references stated here are made by the author & don't reflect the endorsement of iU at all times unless otherwise drafted by official staff at iU. This article was first published here on 16th November 2013.
Dr. Trilok Kumar Jain
Dr. Trilok Kumar Jain is a contributing writer at Inspiration Unlimited eMagazin