Established in 2005, Children's India is a Forum for films and education, making strides with the belief in empowering and exposing young minds to theatre, performing arts and training workshops on animation, story writing, film appreciation and many others.
This Page Has Inspired
1299
People So Far..

With Festivals and events lined up till New Year, here is another one entering the calender. The 9th Children's India International Children's Film Festival.

Organized by Children's India this festival will be held from the 24th to 28th of November, 2013 in 5 cities of Karnataka (Bengaluru, Mangalore, Mysore, Gulbarga and Bagalkot).

The Organization strives to educate, and transcend the lives of children through Cinema, Art, Literature and Culture. The organization reached out to more than 3 Lakh Children in 2011 when it organized a year long screening of International Children's films, "Mane Mundhe Makkala Cinema"(titled in Kannada), in many open air localities of Bangalore. 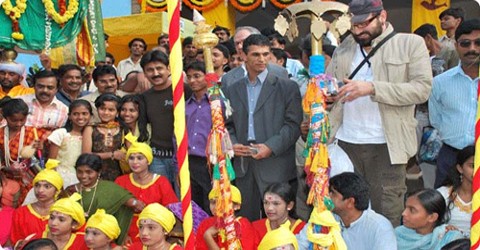 "Our persistent efforts have led the Government to sanction a grant of INR 25 Lakhs per film towards the production of 4 good children's films in Karnataka. This has in effect been a very monumental move both for the benefit of children and children's filmmakers.", says Gotama Gowda, Executive Director, Children's India.
Nearly 150 Children's Films from 43 countries will be screened this time. Macedonia, Croatia, Chile, Greece, Romania, Mozambique, Haiti, Uruguay, Venezuela, are some of them.

The Festival will see A Master Class by an International Professional for Children in Acting, Story boarding and Narration. There will be screening of films made by Children from 7 countries. There will also be screening of a film on environment alongside activities. Special Awards - CIFEJ Prize for best Film and Festival Awards being the main highlight.


An occasion for the children to engage in fun and frolic, and experience the knowledge of the World.
Making a World a little closer - Witness, Learn and Share! Are you going?

This Page Has Inspired
1299
People So Far..
Any facts, figures or references stated here are made by the author & don't reflect the endorsement of iU at all times unless otherwise drafted by official staff at iU. This article was first published here on 9th November 2013.