This Page Has Inspired
1170
People So Far..
Edinburgh Startup Summit

Sara Blakley, the Founder of Spanx and one of America's wealthiest self made billionaires believes that we're moving into the "Age of the female entrepreneur" and at WeAreTheFuture, we couldn't agree more. 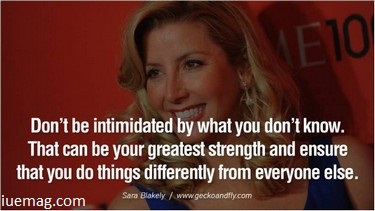 Earlier this year, in partnership with Virgin Unite we donated all the profits from our Chicago Startup Summit to the Woman's Step Up Network and at this years Edinburgh Startup Summit, we are going even further to highlight the success of Female Founders and Leaders.

This year's Edinburgh Startup Summit, is taking place on November 11th at one of the Capital's most stunning venues, The Assembly Rooms. The summit, now in it's forth year, will host 500 entrepreneurs from across the UK and overseas, following summits in New York, San Francisco and Chicago earlier in the year.

Our Female Entrepreneurship Interview with Stacey Ferreira is being sponsored by FanDuel, one of the UK's most successful tech companies.

"At FanDuel we're passionate about empowering future leaders and entrepreneurs, so we're delighted to be sponsoring the Female Entrepreneurship Interview with Stacey Ferreira at the Startup Summit" 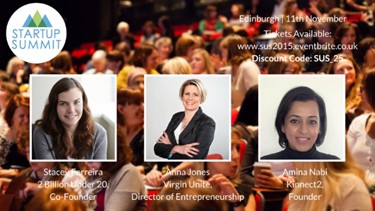 Stacey is a serial entrepreneur, best known for co-founding MySocialCloud.com, an online password manager whose investors included Sir Richard Branson, Jerry Murdock, and Alex Welch. In 2013, at age 20, she and her brother sold their company to Reputation.com.

Subscribe!
AminaNabi, Founder at Kinnect2 and Scottish Asian Business Woman of the Year 2013

Amina is the Founder of Kinnect2, the only social media platform focusing on bringing people and brands together in real time who want to influence the brand that are an integral part of their lives (globally), wherever, whenever, at your fingertips; keeping brands relevant in an era of fast paced change and noise.

In July 2011 she graduated as a Saltire Fellow, which involved a fast track MBA at Babson College in Boston, a placement at Liberty Mutual and a placement in Freeflow Global and in 2013 Amina was awarded the headline award at the RBS Scottish Asian Woman of the year.
Copyrights © 2023 Inspiration Unlimited eMagazine

This Page Has Inspired
1170
People So Far..
Any facts, figures or references stated here are made by the author & don't reflect the endorsement of iU at all times unless otherwise drafted by official staff at iU. This article was first published here on 8th November 2015.