Share a Pencil : An innovation that serves the dreams of writers for longer!

Remember the pencils you wrote with, that were left half used most of the time? If you have them anymore, or if you see anyone throwing them away while it could still be used with a little addition in height, here is what you can do. Read on to know about this simple innovation by a student!
This Page Has Inspired
1112
People So Far..
“I remember my grandfather telling me how he would use the caps of ink pens to make his too small pencil look bigger and utilize the most parts of a pencil. This became the idea to initiate my project – ‘Share a Pencil’. However, there was a problem – it is very rare to find ink pens these days. So, I had to think of a similar idea to help everyone use the pencil to the fullest” states Rakshitha, a 3rd year computer science engineering student of Vemana Institute of Technology, Bangalore, an aspiring software engineer, who is also a passionate singer and a writer. 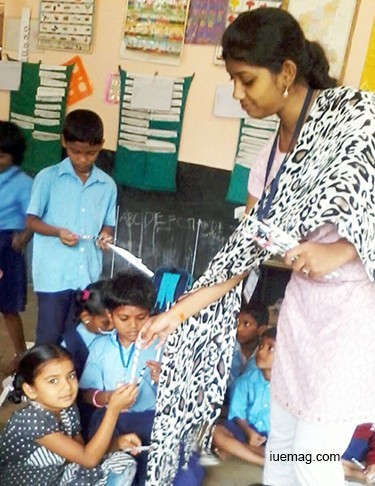 As any normal student, Rakshitha as well had dreams to achieve something that made her parents feel proud of, but needed directions to be able to do same. It was at the same time that she got an opportunity to be a part of the platform of i3, a conference-based and a social-driven platform that has transformed a lot of students into enterprising individuals. After a lot of hustles and bustle, she got to be a part of the platform and began her journey as the delegate of season 10 of i3 Bangalore. Every single week the delegates are given a theme to work on, innovating their own concepts based on the theme and executing a social project. The first ever theme itself gave a kickstart to Rakshitha’s list of achievements.

The theme that got announced as ‘Taste from Waste’, provided a lot of ideas in her mind. While she kept thinking, the idea shared by her grandfather to utilize the pencil became the base for her execution. While she knew she would not be able to collect many caps for the pencils, she decided to do a pencil holder using a sheet of paper. You can check the procedure here: https://www.youtube.com/watch?v=w7dI0RUIkjs 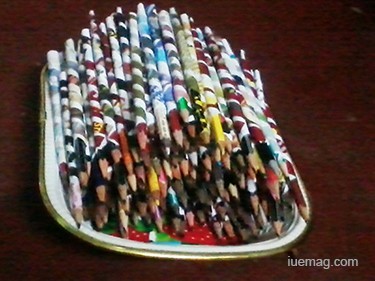 Now that the idea was settled, she began to collect half used pencils or even more, from every house nearby. She tried using the papers to make a holder for the same, which actually made the pencil look bigger. Not only did it look bigger, but also comforted the writing. Immediately after wrapping the first set of pencils with the holders, she approached a government school where she could gift them to the kids of the school. She shares about her first experience, “On seeing the children’s happiness when they received the pencils, I got more excited! I also taught them how to make the holders if their next pencils got shorter. I shared the importance of utilizing every single thing around them fully without wasting. The lessons got reinforced in me when I taught them. I turned the whole excitement into motivation to help more children. My mother also volunteered to help wrap them all. I am thankful to her forever.” 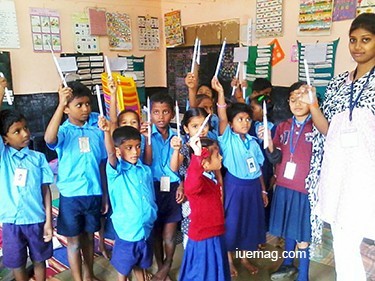 Going back home, she connected with all her friends sharing about her own project, with the highest of excitement. Although she faced criticism from some of them, many appreciated her idea and agreed to help. To make the holders look more attractive, she used colourful old magazine papers to create them. “Now the kids would love it more!” she says, grinning cheerfully. Every single time she gifted new pencils to children at various government schools, the smile on their faces inspired her to do more. While she continued to inspire them directly, she also decided to share this idea with the whole lot of crowd that is mostly present all the time on social media. She blogged about her project, which got hundreds of views in a very little time, which also motivated her to make her first YouTube video ever.

In a weeks’ time, Rakshitha was able to donate more than 200 wrapped pencils to the students in government school and also inspiring more than 700 people who were shared about it and were created awareness to utilize every resource to the fullest. She was also awarded the delegate of the week, which eventually made her parents feel proud of her work. The journey that started there has seen no end; she has been the reason to have impacted thousands of lives consistently since then. Inspiration Unlimited eMagazine wishes her the very best for the impact she will continue to create in the lives of people and for every other dreams she wishes to achieve!
Get the Latest & Recommended articles in your Inbox

This Page Has Inspired
1112
People So Far..
Any facts, figures or references stated here are made by the author & don't reflect the endorsement of iU at all times unless otherwise drafted by official staff at iU. This article was first published here on 11th October 2016.
IJ Kavyashree
IJ Kavyashree is a contributing writer at Inspiration Unlimited eMagazine.