ICA Trust from Wayanad organizes their first ever FIDE rated all India chess tournament at Wayanad and witnesses close to 330 participants. It's inspiring to learn about their vision and mission for the upcoming years. They have already produced 40 FIDE rated players and on their way to produce more. Read ON!
This Page Has Inspired
1098
People So Far..

The FIRST is always cherished, remembered and celebrated besides also being the event that puts the utmost pressure on the organizers. It becomes the benchmark for a long journey ahead and puts you into the rhythm for the journey of growth.
The spiral of growth for an organization begins at the first step and takes the shape according to the initial momentum it is set into. While, course correction is always possible a good start is half work done. So was the case with the ICA Wayanad team that organized their first ever FIDE rated all India Tournament. They pulled together every string possible to set up a SHOW that was enjoyed by every participant, chess players and non-players [those that accompanied the players] equally.

The equipment, the arrangement, timelines, rounds, high levels of coordination between the arbiters, organizers and players and invocation to closure were all extremely well done and executed. The participants were guided from the registration table to the playing tables as smoothly as anything could possibly have been. In least exaggerated words the tournament went by in a swift without much sweat on anyone’s forehead [at least visibly]. Each player knew where the charts of pairing would be up to where they need to be to complete their games and find snacks in between too. Vegetarian and Non-vegetarians were equally delighted with the food arrangements that had the touch of local cuisine. 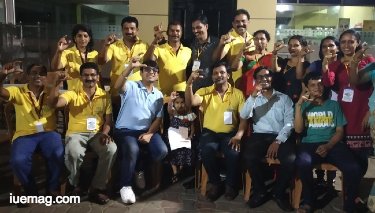 They ensured that everything was available to every visiting participant at ease through the right channels without confusion and the tournament was a definite success until the last minute of prize distribution ceremony. The fact that the 3rd day ran into a busy Monday didn’t deter most participants, their accompanying friends and family from being a part of the program until closing ceremony indicates the spirit of chess the team of ICA is capable of enthusing.

The conversations of each of the organizing members with team iU were insightful and engaging. Amongst those notably influential were with the chief coach and founder of ICA. Mr. Sadashiva, the chief coach at ICA [FIDE rating 1700+], was seen engaging with the participants and others with much grace. He shared much with the editorial team at iU about his experiences in the journey of chess and how it closely teaches anyone willing to learn, the secrets of a quality life. On a lighter note he shared about his experiences in gulf with his boss who Mr. Bill Simpson, who took 6 games to victory against him long ago but left him with most important life lessons of patience, focus and of chess as alternative career. He also highlighted on the importance of having chess as an asset to build better attitudes among people.


Among other conversations, Mr. Santhosh shared about how chess is a game that gets you into anticipatory thought process for lifetime, makes you evaluate your position in life, calculate the decisions you wish to take and also make course corrections a part of your daily life unlike most others who find it hard to put up with this minimum acumen needed for a good life. Mr. Santhosh also encourages his kids [both less than 14 yet] to play chess and in fact and apparently he always meets them over games in most tournaments though software does the pairing bit. His FIDE rating is 1450+ and his kids have 1250+ and close to 1200.

The Chief Coordinator for registrations & Founding trustee at the event Mr. Ganesh hosted the team iU at his resort [Wayanad Green Village], a property which is uniquely called a family stay resort. He & his family ensured that the team iU received the best of hospitality from wayanad region and the whole family was always up on the toes to ensure the positive energies were at best, including Ms. Nisha[his wife], Teertha[his daughter] and Vishnu[their lovely son].

Mr. Jinan Jomon, a 2000+ FIDE rating player, the son of one of the arbiter [Ms. Reena] made it to the event to play the blitz [3 minutes + 2 seconds increment per move] tournament [unrated]. He truly had the whole group of aspiring players around him and at 13 he has picked up the game like no other. Another player Mr Lakshmanan, born in 1944 was seen playing and winning the games in a spree, which most claim is a daunting task at that age. His current FIDE rating is 1537 for standard formats and he has maintained the rating over his aging years too. 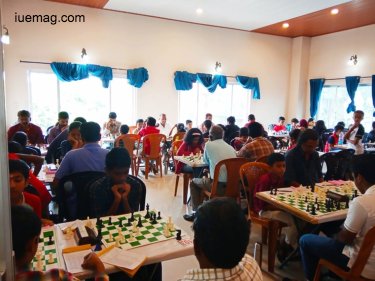 329 players registered all in all from several locations across South India and the tournament had live updates to results on one of the official global chess result websites. The results and standings could be seen on the dedicated page of chess-results.com. [The tournament updates can be followed here: https://chess-results.com/tnr445718.aspx?lan=1].
The tournament was organized in the Swiss 9-rounds formats with 30 | 30 time format. [30 min per game with 30 sec increment per move]. Over 1400+ games were played. Many unrated players made it to the tournament. Players from Bangalore, Tamil Nadu, Mysore, other local parts of south Indian states were seen participating. Mr. Sujit Lalwani, the chief editor at iU eMagazine appeared for his first ever tournament at this event. The chief editor and Mr. Kunal Jain from iU were also invited and honored to give away prizes for the blitz tournament.

The final prize list and other photographs of the event are up and LIVE here: 1st ICA Wayanad All India FIDE Rated Tournament. Mr Paulson Frenchy became the star of the tournament by winning 8 points on the total 9 games and took the cash prize of 50,000 rupees.

If you want to be a part of their upcoming tournaments and also reach out the team or get chess coaching from their team of coaches in wayanad[or online] shoot your requests in the comments below. To follow more stories from this tournaments of other chess players stay tuned to iU eMagazine's inspiring stories section by subscribing with us.
Get the Latest & Recommended articles in your Inbox

While a lot of players are playing offline, a whole deal of players play online to learn and improve their games. The good news is that these online games are not always with engines alone. With communities like chess.com the game is fast growing and evolving into a whole new dimension. With technology, training, commentary, improvisation techniques, Big data backed engines, clubs, forums, news, LIVE TV, tournaments and so much more they make chess a part of millions of lives through their personal devices. The profile on chess.com is the new online destination to flaunt and share for chess lovers like FB/Twitter used to once be. Share your profile in the comments below and we shall stay connected with you there over games of chess.
Do you play chess? What apps do you use? Are you rated? If your FIDE rating is above 1500, we would love to hear from you. Feel free to shoot a line in the comments and we shall reach you soon over the upcoming months.
Copyrights © 2023 Inspiration Unlimited eMagazine

This Page Has Inspired
1098
People So Far..
Any facts, figures or references stated here are made by the author & don't reflect the endorsement of iU at all times unless otherwise drafted by official staff at iU. This article was first published here on 15th June 2019.