The Water Giants Of Australia: Why They Do What They Do?

Did you ever stop to think why whales blow water out of their nose or splash their tail against the surface of the water? They are trying to tell you something by through such behaviour. Let's take a look.
This Page Has Inspired
1070
People So Far..
Did you know there are more than 45 species of whales, dolphins, and porpoises in Australia alone? More astonishing is the fact that 60% of the world’s whale population whales can be found in Australian waters.

If you are an Australian, we can bet you must have visited the docks at least once during the whale watching season. Whale watching is one of the most requested water sports activity and brings hundred and thousands of whale watchers to the beautiful waters each year. However, not many of the travellers know about the different behaviours of whales and what they signify. 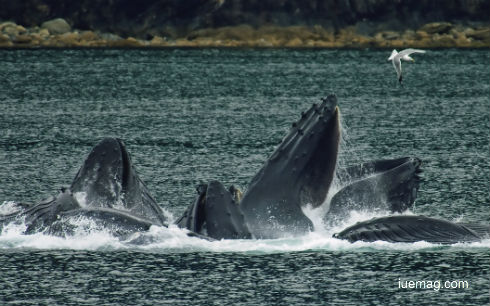 In this article, we shall take a look at a few most common behaviours they depict so that when you go on your next whale watching trip, you know what they are signalling.

Lobtailing or tail or fin slapping

This occurs when whales lift their tails, fluke them out of the water, and then bang them against the water fast and hard, making a loud splash. The behaviour is associated with communication, scaring potential attackers, or showing aggression.

The act of breaching involves the complete emerging of the whale from the water. During the act, the whole or almost whole of the whale’s body leaves the water. The activity often observed in humpback whales. Researchers believe it can mean a number of different things such as warding off males, attracting other whales, or trying to communicate amongst themselves.

Blowing water out of their nostrils allow them to excrete any mucus or water vapours from their body. Different species of whales have different blows.

Spy hopping refers to the behaviour in which a whale vertically lifts off its head above the waters tol her eyes. Many experts believe that whales do that to see above the waters for any unanticipated danger. They mostly do it when they hear an unfamiliar sound such as that of a boat. So yes, you can say that they look up to see you watching them.

Where to Spot One?

Subscribe!
Now that we have learned about the many behaviours and why they do it, we can’t leave you without letting you know where to spot some when vacationing in Australia. If you plan to visit soon, you will be delighted to know that the upcoming whale season is about to begin. Whales can be spotted from May to November of each year as the water giants head out to breed and eat. Some of the places perfect for a whale sighting include:
So are you all set for an experience of a lifetime?
Copyrights © 2022 Inspiration Unlimited eMagazine

This Page Has Inspired
1070
People So Far..
Any facts, figures or references stated here are made by the author & don't reflect the endorsement of iU at all times unless otherwise drafted by official staff at iU. This article was first published here on 10th May 2017.