The ultimate power in oneself, is unleashed when he/she goes through the biggest struggles of life. That biggest challenge for this person was a paralysis attack, which left 90% of his body paralyzed for lifetime. The attack did not stop him from being the reason to ignite many lives! Read on
This Page Has Inspired
2436
People So Far..
December 1999. With a strong deep dive, he began to drown into the sea; he found himself unable to move his limbs and the condition of helplessness led him have mixed emotions. He began to feel sad for the condition, at the same time, laughed at himself for the current scenario, thinking he wouldn’t go back alive. He felt funny when he found his limbs unable to move. There was total darkness. It was a few hours later, when he opened his eyes, he found people around him, looking at his condition. He was unable to move an inch by himself!

When he asked his family about how he reached the shore, he was informed that a European lady who was swimming deep down had saved him, but they couldn’t find her later. He still recalls that he couldn’t even thank the person who saved his life. He was pulled into the ambulance, and the family along with him began to move towards the hospital. Amidst the fast moving people in the city of Mumbai, the crowded roads, and the slow moving traffic, they reached the Hinduja Hospital. Immediately after the tedious procedures of admission were done at the crucial situation, the doctors then began to treat him. His parents and his wife were told that he was entirely pulverized and from then, neck downwards paralyzed for life. There was absolutely no cure for his condition and even his chances of survival were minimal. They were told that 90% of his body parts would never be able to move anymore. Seeing their only son who was bedridden and knowing that he would remain in the same condition throughout his life, his parents were shattered. Standing at the beach of Goa, just hours before, with her husband, with new dreams for the new millennium, and then, finding him in the condition of inability to move, his wife was staring at an empty abyss.

The pain that he had to undergo, knowing that he wouldn’t be able to move an inch on his own anymore, knowing that he wouldn’t anymore get back the enjoyable days with his wife, knowing that he would no more be able to help his parents, was unimaginable. “I was lying on the bed like a vegetable” he says. It was the situation where a personal caretaker had to be there with him every minute. He adds, “Not always does a caretaker stay with the patient. I had to scream out half a dozen times to have someone help me even to go to the rest room. Initially, there were times when I thought that death would have been better than going through this pain. I was someone who loved travelling, kept moving but my life was turned upside down when I was in a situation where I was unable to even move!” 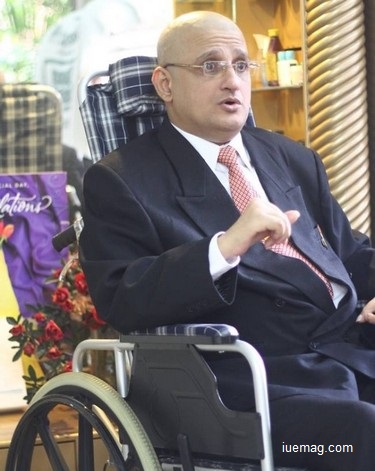 Every day that passed, felt like a year with more pain mentally, than the physical illness. It was on the 17th day, when one of the staffs in the hospital entered his room and was about to help him move, shockingly stood quiet because of the five massive bed sores in his body that were so severe. On seeing this, the doctors informed his parents that he would not survive for more than two or three weeks. The parents who had once dreamt of seeing their son take care of them when they would grew old, could not believe that they had to witness their only son’s death. The news shattered all the dreams they had for their son. When he heard the news, he felt more weak; all that he could do was to cry and shout out loud, grieving the situation. Everyone was left broken.

It was on the 19th day when he heard his soul speaking, “Why are you focusing on the 90 percent of your parts that are not functioning, instead of focusing on the 10 percent that is functioning? You can think, you can speak, you can eat, you can drink, you can see, you heart still beats, you are alive! The power you need to succeed is already within you and if you can channelize this untapped potential, nothing is impossible - boomed a deep, powerful voice within me”. This realization helped him gather all his strength, slowly yet steadily, and make himself believe that he would live longer and achieve what many have not been able to. He went to the doctor in his wheelchair and said, “Doctor, I appreciate your diagnosis; but I refuse to accept your verdict. I will not live like a vegetable for the rest of my life. Rather, I will spread hope, inspiration and positivity in the hearts of millions.” He could clearly see that the doctor’s expression was changing. The doctor stared at him with a definite awe. It was only a matter of some time that he cured his bed sores all by himself.

He slowly began to work on the interior design business. “One day, our driver drove my father , my caretaker & me to Mumbai Central Railway Station - the largest landmark in Mumbai. The newly refurbished interiors unraveled before my eyes, the revamping was planned by me, and executed to perfection by the architects, engineers and workers. This was one of the 15 international interior designing projects which I did after my life changing incident. My father had exclaimed, ‘Hats off to you my son. Handling such a daunting task despite being 90% paralyzed. Possible only with willpower, enduring passion, perseverance and sheer determination, simply because you refused to quit and give up in life.’ My heart swelled with pride & gratitude. I felt happy to note that several of my projects had featured in many international architectural magazines. I must mention that had it not been for the tremendous moral support of my parents, my sisters and my wife, it would not have been possible for me to keep up the fight” he recalls.
Get the Latest & Recommended articles in your Inbox

Subscribe!
However, something was still bothering him. He disclosed about this to Eesha, his wife, “I am still feeling an emptiness within.” She helped him realize that he wanted to reach out to others, inspire them to fight against their adversities, sharing his own example of resilience, grit and death defying survival/victory. “Yes,” he acknowledged, “Now it’s time to share my life” he said.

This was when he decided he would convert all the pain of his and his family, into inspiration to the world. Life did not stop testing him. What happened next will leave you stunned! Read what happened next, here.
Copyrights © 2023 Inspiration Unlimited eMagazine

This Page Has Inspired
2436
People So Far..
Any facts, figures or references stated here are made by the author & don't reflect the endorsement of iU at all times unless otherwise drafted by official staff at iU. This article was first published here on 25th March 2016.
IJ Kavyashree
IJ Kavyashree is a contributing writer at Inspiration Unlimited eMagazine.