This Page Has Inspired
1073
People So Far..
It’s now ten years since FC Barcelona bucked a 111-year trend of not wearing any sponsors logos on their iconic kits. Back in December 2010, the Catalan club decided it would emblazon its shirts with the logo for the Qatar Foundation, with the not-for-profit group paying €150 million for the privilege over five years. It was a staggering amount to pay, but not uncommon in modern European football. 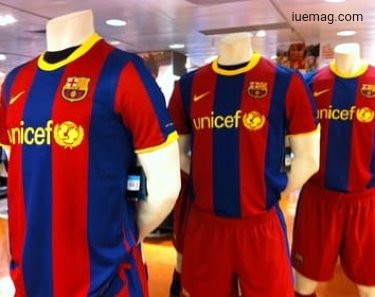 While some fans may have lamented Barcelona’s break with tradition, it’s simply a reality of the football world. Today, the Barcelona jersey has the logo of the online retailer, Rakuten, and the longer the jersey has that brand, the more fans associate it as part of the club’s DNA.

Indeed, there is very little animosity from football fans towards the brands that adorn their club’s jersey. On occasion, such as when Newcastle was sponsored by payday loan company, Wonga, there is an outcry that the company’s ethics do not suit those of the football team. However, by and large, there is a warm acceptance of the logo, and, of course, the money that brings to the club.

Logos can be used as a reference point

But the logo becomes more than just a means to earn sponsorship money to buy new players. For many fans, they start seeing the sponsorship as a reference point. You might, for example, hear a Manchester United fan talk about the “old Sharp Viewcam black strip that Eric Cantona wore”. The brand acts as a signpost for the fans. United have had several black strips – they have one today – but the Sharp Viewcam reference tells us where and when in time this was in the club’s history (the 1994/95 season, if you were wondering).

Of course, we should point out that the companies take a bit of a gamble when setting out huge sponsorship deals. For several English clubs down the years, the leading sponsor – Mansion Casino – would have been on the shirts. One such club is AFC Bournemouth, a team that got relegated from the Premier League at the end of last season. Luckily for Mansion, the contract had ended. There is a world of difference between the exposure Premier League and EFL Championship, so those millions paid can look like bad value if the team is not playing at the top.

The flipside, though, is that a smaller contract can pay dividends if the team rises in stature. Another one of Mansion Group’s products, MansionBet, adorns the kit of Bristol City FC. At the time of writing, the club is at the top of the EFL Championship, so promotion next year to the Premier League would be a huge coup for its sponsors.

FIFA does not allow shirt sponsorship in international games

It’s worth noting that while club shirts are now intertwined with their sponsors – in some cases they have two; one on the front and another on the sleeve – FIFA, football’s governing body, does not allow international teams to wear sponsors on their shirts. This might stop the players from wearing them, but it doesn’t always stop the national football associations. Ask any Republic of Ireland fan, for example, to name their favorite shirt, and they will say the one with “Opel” on the front from the late-80s to early-90s. The players couldn’t wear the Opel shirt during the 1990 World Cup, but kits sold to fans had that logo.

In the end, it’s become a part of modern football. Sure, you might hear fans of American sports claim that the iconic jerseys should never be tarnished, but Europeans will counter with the fact that marketing permeates through American sports in different ways. In the end, fans learn to love the logo almost as much as the shirt itself, especially when the team wearing the jersey has gained some success.

This Page Has Inspired
1073
People So Far..
Any facts, figures or references stated here are made by the author & don't reflect the endorsement of iU at all times unless otherwise drafted by official staff at iU. This article was first published here on 23rd November 2020.