Asia Has Become a Leader in Gaming Tourism - How?

This Page Has Inspired
1076
People So Far..
There are several reasons to travel the world, but one that is becoming increasingly popular is to experience the different types of casinos and bets on offer in countries around the world. This isn’t a new trend because cities such as Las Vegas are built on these solid foundations. What is surprising is the region that is currently the undisputed king of the sector.

Although the US and Europe are historically renowned for their superior facilities, Asia has quickly taken over as the leader in gambling tourism, with the likes of China, Japan, Singapore, and the Philippines all containing markets worth more than £1 billion. The question is, how has this area taken on the likes of Las Vegas and succeeded? Here are some thoughts.

In the past, betting wasn’t an activity that appealed to many Asian nations. If anything, they disliked the impacts it had on societies. But this has changed dramatically in the last decade, with more and more Asians engaging with wagering platforms. For example, while gambling in Japan is technically illegal, millions of Japanese citizens regularly head to Pachinko parlours and exchange tokens for money. Meanwhile, Sandra Wong on LinkedIn points out that a considerable 80% of the population of Hong Kong is estimated to have gambled at some point in their lives.

As a result, the Asia-Pacific region is now the most lucrative market in the industry and is projected to grow by a CAGR of 7% by 2024, according to PR Newswire. The company says this is the equivalent of an increase of £70 billion. Of course, the introduction of the internet has helped massively because it provides punters with a wider range of accessibility that they can use to increase their familiarity with games. Even countries where gambling laws aren’t black and white are getting in on the act. Almost every nation in Asia has different legislation, making it challenging for customers to read through boring jargon and understand what’s being declared. However, many providers in the region aim to bring top casino and sportsbook recommendations via trusted reviews, which means they have the answers you’re looking for that will put your mind at ease. For example, Asiabet promotes the fact it offers accurate and up-to-date legal advice by boiling down the jargon into simple facts.

Now that the data is accessible and easy-to-follow, it appears that Asian culture is beginning to accept gambling as a legitimately fun activity that they are happy to engage in often. From a tourism perspective, this can only be healthy as the obstacles that were previously in the way are gone.

Keeping It in the Family

Whereas Americans’ and Europeans’ first thoughts would be to experience gambling outside of their respective homes, Asians don’t think the same way. For instance, nearly 50% of visitors to Las Vegas arrive by plane, highlighting how lots of guests aren’t from the area. In Asia, the landscape is the polar opposite.

Just recently, China’s government has released a list of overseas gambling destinations that won’t be accessible to Chinese citizens. This is to stop the flow of almost £11 billion that is believed to go to other countries. Yet tourists are still allowed to enter China to gamble if they wish. A direct knock-on effect is that there will be more places within China that flourish from wagering-related activities, while potential competitors see their revenues drop as Chinese tourists avoid their facilities.

Locations that aren’t synonymous with betting within China will benefit, too, as our iUe Magazine post regarding Yangjiang highlighted back in 2019. It’s one of the best cities in the country to visit for its natural beauty, but it also contains five-star hotels that offer gambling activities, meaning it has the best of both worlds for visitors.
Get the Latest & Recommended articles in your Inbox 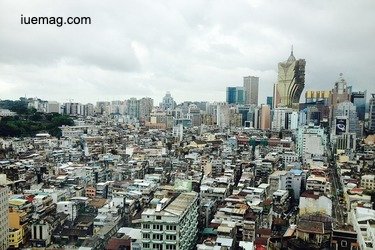 Macau is a success story like no other. Before the start of the millennium, it wasn’t even owned by the Chinese because it was still a Portuguese territory. After Portugal handed it back, it was pretty much a swamp right up until 2007, when restrictions on wagering were gradually being lifted. Today, it’s a multi-billion-pound industry this Independent article report says makes five times what Vegas does annually.

The stunning thing about Macau is that it has only been governed by China for 22-years. In this time, it has taken on the former heavyweight of the division and seemingly beaten it at its own game. Of course, neighbouring nations are taking heed of the example Macau is setting and attempting to replicate the results.
Today, a plethora of destinations within Asia are opening up to gambling tourists because they understand the profit involved in the market. That includes India, Thailand, Cambodia, and Vietnam, to name a few. Even Middle Eastern countries such as the UAE and Saudi Arabia are beginning to loosen their grip.
The more this happens, the more people will flock to Asia to experience what the region has to offer in terms of wagering. This will heighten the area’s power on the sector, consolidating its position at the head of the table. That’s how Asia has become a leader in gambling tourism, and why the trend won’t stop soon.
Copyrights © 2023 Inspiration Unlimited eMagazine

This Page Has Inspired
1076
People So Far..
Any facts, figures or references stated here are made by the author & don't reflect the endorsement of iU at all times unless otherwise drafted by official staff at iU. This article was first published here on 20th May 2021.