'Do it Now!' and Simplify your life - Interview of Mr. Sujit Lalwani on Joyous Expansion Podcast

In these trying times, there is a lot of negative news. However, even during the worst, there are people out there making a difference and making this world a better place. Sujit Lalwani noticed this hole in the media and decided to fill it with Inspiration Unlimited. Sujit shares his journey on how he created Inspiration Unlimited (https://www.iuemag.com)

What got you started in wanting to become an entrepreneur?

Someone who inspired me as I grew up was my dad and how he worked as an Entrepreneur. He had moved down to this city called Bengaluru in India and started his own business. We were otherwise from a small town in a state called Rajasthan in India. He started dealing with false ceiling materials, the plaster of Paris, and other products in the same line. He had set up the business all by himself and started employing people and as I saw him grow his business, he had better control over his time as well. While there were days when he worked hard, I mean it would be weeks together, sometimes even months; but there were other days when he allocated time for the family. As I saw him do that, there was an inclination right from the early stages of life that even I would get into business at one point in time. When I grew up and learned more about entrepreneurs, read their stories, how they built very successful companies, and how exciting it is to lead creation; and given that I had this whole inclination towards even creating something that will be lasting beyond our lifetime; all of these, kind of synergized and moved me to decide that I'm going to be an entrepreneur. Though I didn't know what business I would eventually be setting up, I was extremely interested in the very fact that I would be involved with Business & Entrepreneurship which would make me a strong problem-solver and eventually, I would figure my way out to what I would want to be doing.

What problem are you looking to solve?

I had always felt that there's a lack of positivity and a positivity media in the world. Every single morning when I read the newspaper, there was so much news about crime, politics and about all the things happening around that are negative, but very little positive news. So, I always had this vision that I would like to do something that brings a positivity media in the world and that's how Inspiration Unlimited (iU) got in place about seven and a half years ago and we've been doing good since then. With the kind of distribution channels and channel partners in place, we have a potential reach of almost close to 100 million downloads with possibly an active readers base of almost about 10 million+ people. So, that's how far we've come. But yes, I would like that anyone who wakes up and says, “Hey, I would want to visit a platform or a website that's 100% positive with no gossips or any negative news content which is going to put my energies down”- I think they should visit iU and spend enough time with the content that could give them the kick for the day, and they could get going. That's what I'm addressing. 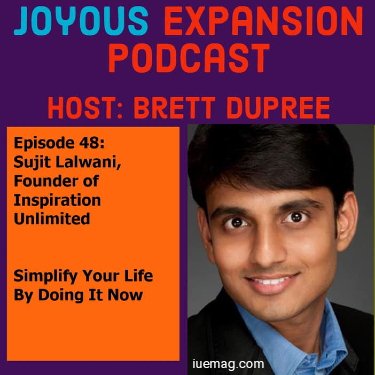 Was there a time you lost everything?

Oh Yes! I had taken up a sales and marketing career early on for five years (during my college days and post that). After I had moved out of my college, I had thought that I would take that as a full-time career and a long-term livelihood. But I saw that during one of the quite unforeseen situations, the Organization kind of toppled. I wasn't the owner then and there were a lot of my business associates who were a part of my network and we were collectively selling the product.
The business had to come to a halt because we had to stop the operations for some time and it was almost like owning a manufacturing plant, being on top of its leadership position and then almost seeing that the plant is going to be shut down. That time, I would say that, there was a massive change in direction needed. I had to figure my way out and I had to help the people associated with me to figure their ways out and make a decision of what's going to be next because we knew that this isn’t going to continue and we can’t pursue this longer.

Another basket that I put my eggs into, I knew I had to figure a whole new way out and that point, I would say, it was a terrific loss, especially of the dreams that were seen already. Put a pause altogether, put a new vision in place and the transition that was to be done, I think was the most challenging one. Such times have repeated, of course, I wouldn't say they haven't happened again, but they happened in different patterns or different formats or different styles.

The challenging times do come at a different point in time, but when you have one reference in your past, you can look ahead and say, “Hey listen, if I could pull through then, I can pull through now” and then your second reference happens and then the third time you're like, “Hey, if I could pull it through then, I can still pull it through this one”. Maybe, that's when I really learned this phrase from one of my mentors when he said, “Just remember one thing, this too shall pass”. That gave me strength all the time. Whenever there were very tough times, I would say, "Hey, this too shall pass, and I'll figure my way out." And one-day things will be much better than they are right now.

When it comes to Mentors, I have had several mentors I would look up to. Whenever I found some good qualities in people and I would learn that and then have more conversations with them and learn a lot about how they deal with things.

What would you tell your 8-year-old self?

One of the things that if I look back in my life and I would like to advise to my younger self would be “If you really want to go very, very far in life and be very successful, you have to start really early. You cannot delay it.” I started at 18 and I still feel that was quite late. So I advise every single listener right now, “No matter where you are, what you're doing, this is the best time to start working on yourself, towards your goals. Plan them out, put a to-do list, put a to-be list for yourself, decide what you're really going to be or what you want to become, what kind of list you want to address, what kind of a bucket list you want to put for yourself for this one life and start now”.
The second thing that I want to share is if there's any idea, any dream that you have, do not put it off for later. There should be just one mantra and that is 'Do it Now'. There shouldn't be, I do it next, I'll do it later or for people who are wanting to start businesses shouldn’t feel “that this is an idea that is capital intensive. I don't have support. I don't have people. I do not know if this is really going to work”. Put all of those aside and say “Do it now”. The third thing that I want to share with everybody, one of the best thing that really helped me get so much of leadership abilities and talents was ‘volunteering and helping people’- because that just made me so comfortable, joyous, and the deeds that could not be paid back in cash or kind.

This is something I would love to tell everyone, “Corporate social responsibility is doing great. The world now needs individually, socially responsible people. ‘Individual Social Responsibility’ is on the radar. I would sum it up saying that, “Hey guys, it's high time we realize that we have been human beings for a very long time, it's time to become human doings”.
All of this is what I would tell myself, the earliest self who had just started; and this is something I have for all the listeners “I hope I would hear from you as a human doing and not just being a human being.”

This Page Has Inspired
1047
People So Far..
Any facts, figures or references stated here are made by the author & don't reflect the endorsement of iU at all times unless otherwise drafted by official staff at iU. This article was first published here on 1st August 2020.