How Important is Drinking Water During Exercise? 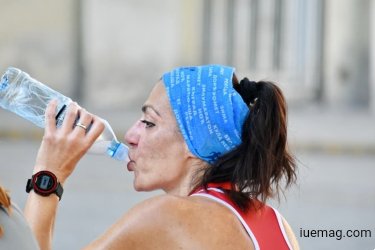 Drinking water during exercise is essential for everyone from elite athletes to fitness newbies. Previously, it was believed that simply drinking plenty of water after a long workout was good enough to prevent dehydration. However, studies conducted in the last decade show that consuming water before, during and after a workout is a much healthier option.

Is it necessary to drink water during a workout?

Drinking water during exercise is important as it helps to maintain a healthy level of fluids in the body. Even mild dehydration can have an effect on performance as it leads to muscle fatigue and impaired coordination. When you are dehydrated, your body does not have sufficient fluids to produce perspiration. Perspiration plays a key role in controlling body temperature which is why dehydration greatly increases the risk of heat exhaustion. Furthermore, water makes up 79% of our muscles which is why inadequate water intake when exercising often leads to muscle cramps. Drinking water when exercising is one of the simplest ways to reduce muscle cramps.

The average person loses 27 to 47 fluid ounces of sweat per hour when exercising. To put this into perspective, one glass of water is about 8 ounces which means that the average person sweats the equivalent of 3-6 glasses during a one-hour workout! Studies show that the amount of sweat we produce can vary greatly depending on the age and gender of the person, the intensity of the workout and the ambient temperature during the workout. Maximal sweating capacity can rise to as much as 100 fluid ounces an hour (equivalent to 12 glasses) in high-temperature conditions. The reason we don’t realize how much we sweat is that our perspiration is constantly evaporating in order to keep our bodies cool.

How much water to drink before, during and after a workout

It is equally important to drink water before, during and after a workout in order to stay properly hydrated. According to the American Council on Exercise, you should drink 17-20 ounces of water 2 hours before your workout. During your workout, aim for 7-10 ounces of water every 10 to 20 minutes. Weigh yourself before and after you exercise and drink 16-24 ounces for every pound of weight loss after a workout. It’s best to do this within half an hour after exercising. 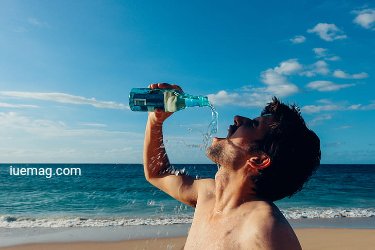 Keep in mind that standard guidelines for water intake during exercise are not hard and fast rules and should be tweaked according to your requirements. If you tend to sweat a lot when exercising, you can increase your water intake. You can also drink an additional 8 ounces of water during your warm-up and cool-down sessions to ensure that you don’t get dehydrated. Our thirst mechanism is only triggered once we are already dehydrated so don’t wait until you’re thirsty to drink water.

Ways to stay hydrated while exercising

Water provides adequate hydration for the average workout that lasts for an hour or less. Don’t chug it down at one go, instead have small amounts throughout your workout session. Some studies show that drinking cold water while exercising helps to maintain the body’s core temperature although this did not translate to significant in endurance or power. You’re also more likely to reach for your water bottle if it’s cool or cold water rather than room temperature.

Subscribe!
For long training sessions that last over 90 minutes or particularly strenuous workouts, you might need more than just water. When you sweat, you lose sodium along with water which is where electrolyte solutions come in as they help to replenish lost sodium which helps you stay hydrated when fluid losses are high. Sports drinks are another good option for high-intensity workouts as they contain carbs that help to provide a boost of energy to your muscles as well as stabilize blood glucose levels.
When choosing a sports drink, look for one that contains 6g of carbs and 20-70mg of sodium per 100 ml of the drink. Coconut water has become a very popular choice among fitness enthusiasts as it is viewed as a natural alternative to sports drinks. Although coconut water does contain electrolytes, it is low in sodium which means that it will not be as effective as a sports drink during a vigorous workout.
Regular exercise not only helps to improve physical fitness but it also has a positive impact on mental and emotional health. Studies show that daily exercise helps to reduce stress levels, improve mood and promote a positive mindset.
Copyrights © 2023 Inspiration Unlimited eMagazine

This Page Has Inspired
2461
People So Far..
Any facts, figures or references stated here are made by the author & don't reflect the endorsement of iU at all times unless otherwise drafted by official staff at iU. This article was first published here on 9th March 2020.